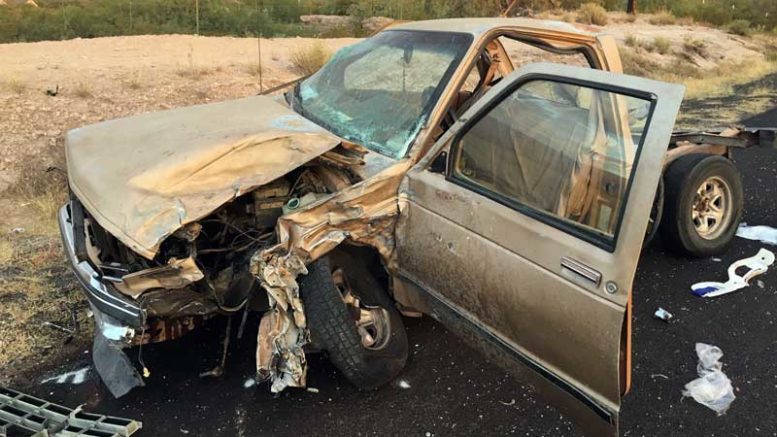 Contributed Photo/Courtesy DPS: Sylvia Moreno, 38, of Safford had to be extricated from this truck after causing a three-vehicle collision Moreno was later airlifted to a Tucson hospital.

GRAHAM COUNTY – A driver was flown to Banner-University Medical Center Tucson early Thursday morning after being T-boned during a three-vehicle collision on U.S. Highway 191 at milepost 115 near Roper Lake road. 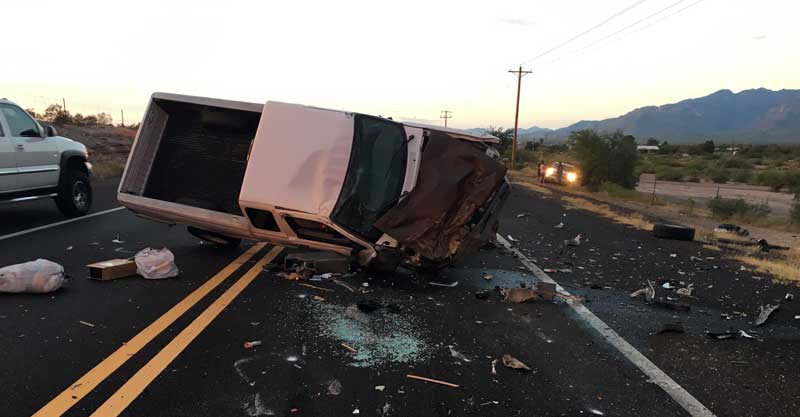 Contributed Photo/Courtesy DPS: A southbound Ford Ranger was upended in the collision.

According to a news release from the Arizona Department of Public Safety, a brown Chevrolet S-10 pickup truck driven by Sylvia Mendez Moreno, 38, of Safford was northbound when she crossed the centerline into oncoming traffic at about 6:35 a.m.

A white, Chevrolet Silverado pickup truck driven by Gerald Boyd Fleming, 25, of Willcox, was northbound and swerved toward the shoulder in an attempt to avoid a collision with Moreno.

The trucks sideswiped each other, however, which forced the Silverado off the road and into a fence and caused Moreno’s truck to rotate counterclockwise in the southbound lane where she was then T-boned by a southbound white, Ford Ranger, driven by Ramon Reyes, 49, of Thatcher. 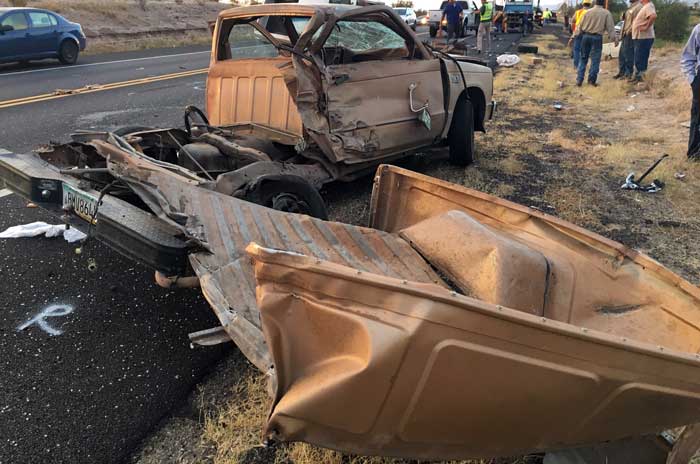 Contributed Photo/Courtesy DPS: The force of the collision knocked off the Chevrolet S-10’s truck bed.

The Ranger ended up overturning on its side before coming to a rest in the middle of the roadway, and Moreno’s truck had its bed knocked off and rotated over to the road’s shoulder.

Moreno was trapped inside her truck and had to be extricated by the Safford Fire Department. Paramedics from Lifeline Ambulance then transported her to Mt. Graham Regional Medical Center, where she was examined and then put on a helicopter for UMC.

According to the release, Reyes had several cuts on his hand and also was experiencing chest pains. Fleming did not report any injuries. The release states Moreno was found to be at fault for the collisions and will be issued a citation for unsafe lane usage.

While the scene was being cleaned, DPS troopers received assistance from the Graham County Sheriff’s Office, Safford Police Department and Arizona Department of Transportation.