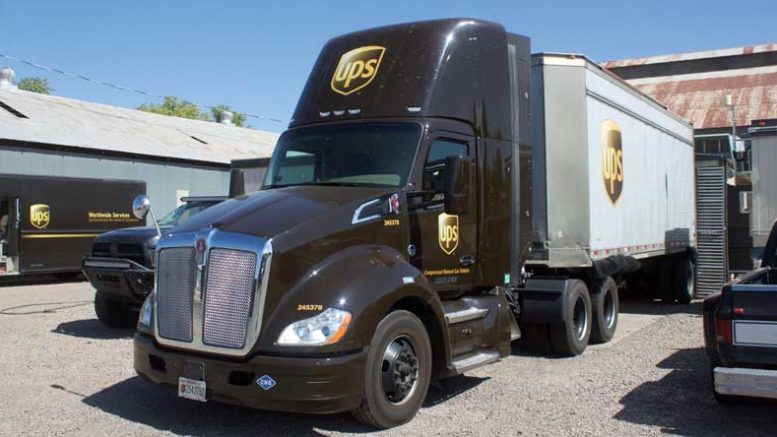 Jon Johnson Photo/Gila Valley Central: A UPS semi-truck sits at its unloading station at its Safford hub. The driver of this truck had his windshield broken by people throwing rocks at the bridge in San Carlos the previous night.

UPS semi-truck among those hit

SAN CARLOS – Traveling along U.S. Highway 70 through San Carlos continues to be perilous as incidents of youths throwing rocks at vehicles as they cross the bridge at Peridot continues.

On Wednesday night, a UPS freight truck driven by a Safford man had its windshield damaged by a rock as it traveled over the bridge on its way to Phoenix. According to a UPS employee, the driver was not injured.

After filing a police report, the driver continued his route and returned the following morning with either a replacement truck or one that had a replaced windshield, according to the UPS employee. 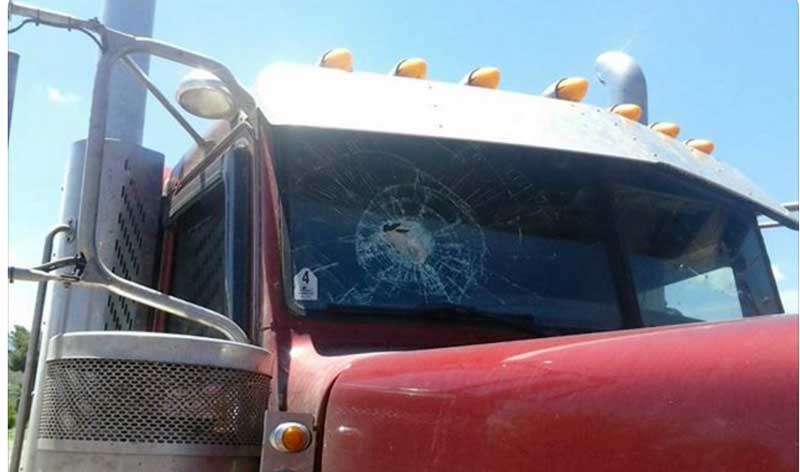 Contributed Photo: This semi-truck was struck by a rock as it passed through the San Carlos Apache Reservation in July.

According to an account from a local resident, another semi-truck was also damaged in a rock-throwing incident the same night as well as a vehicle that was parked at a residence in the area. The resident said officers tracked five suspects from the riverbed below the bridge but were not able to locate them.

In July, the San Carlos Police Department issued an advisory for motorists to be wary of rocks falling from the air or already on the road when traveling on U.S. Highway 70 through the San Carlos/Peridot area. That warning was issued after a rash of incidents in which several vehicles – both commercial and non-commercial – were damaged by flying rocks.

At that time, San Carlos Police Chief Alejandro Benally said his department was addressing the situation with increased patrols utilizing off-duty officers working the area solely to combat the issue and by releasing public service announcements on local radio. The PSA’s advise about the dangers of such activity and ask the community to speak to their children about the problem and report if they see people throwing rocks.

Motorists advised to watch out for rocks when traveling through reservation