THATCHER – For the second week in a row, the big green machine flexed its offensive and defensive muscles and forced a running clock on its way to another blowout playoff victory in its quest to repeat as state champions.

The No. 3 Thatcher Eagles (9-1 conference, 11-1 overall) will now travel to Fountain Hills High School on Saturday for a 2 p.m. showdown with the No. 2 Phoenix Christian Cougars (12-0 conference, 12-0 overall). The Eagles’ young men better be wary, because the Cougars are certain to be on the prowl after beating the No. 10 Tempe Prep Knights (6-5 conference, 7-5 overall), 58-15. 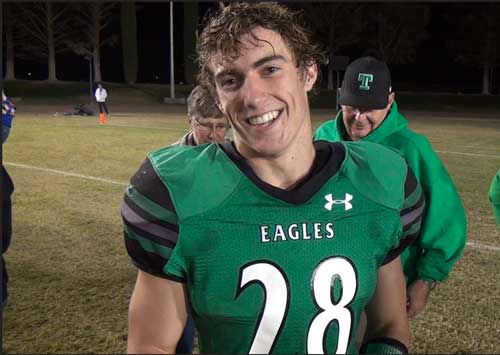 The semifinals feature the No. 1-4 seeds, with three of them being rural, public schools and just one urban, private school.

The Eagles met the No. 6 St. Johns Redskins (7-4 conference, 8-4 overall) at John T. Mickelson Stadium in Thatcher on Friday night and scored on their first eight possessions on their way to a 55-14 victory. After a quick score at the beginning of the third quarter, the mercy rule running clock was in play for the rest of the game.

“I can’t say that I don’t like it,” Thatcher head coach Sean Hinton said. “It’s always good to get that clock running and get out of here without an injury.” 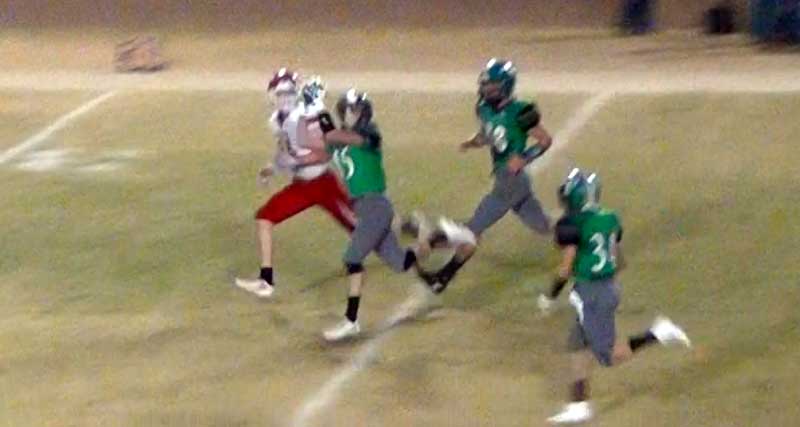 The Eagles’ Trevan Clark opened the scoring with a 5-yard TD run on their fourth play from scrimmage, and, after Trace Goodman intercepted Redskins’ sophomore quarterback Ramon Sanchez, Thatcher quarterback Tyler Roebuck hit Jordan Herbert in stride on the very next play for a 75-yard TD strike. Before the visiting fans could get their concessions and back to their seat, the Eagles were already up, 12-0.

Thatcher didn’t let off the gas, however, and scored two more times in the opening quarter after its defense forced two St. Johns punts. Brock Jones scored on a 1-yard plunge, followed by an exciting 54-yard touchdown run by Shane Cooke, who somehow kept his balance as two Redskins attempted the tackle, spun out and finished down the right sideline.

“They’re a good team,” St. Johns head coach Mike Morgan said. “They block well, tackle well; they’re fast; they’ve got good speed. They’ve got a lot of numbers. We just got beat in every facet of the game.” 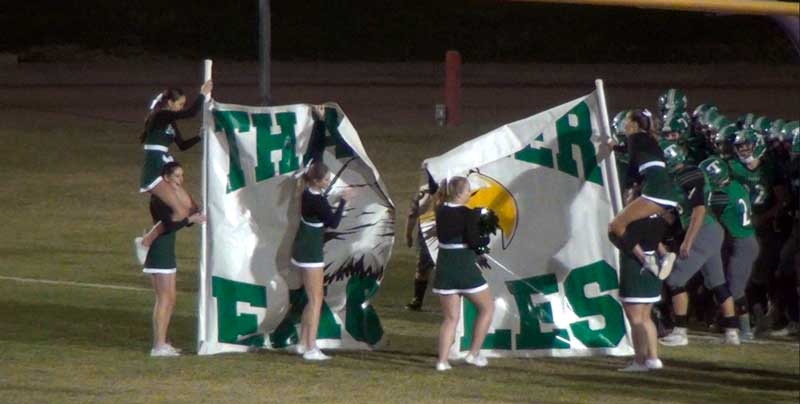 After going down 26-0 in the first quarter, St. Johns began methodically moving the ball down the field with some hard running behind Joseph Ramsey and Jarred Fielder. The Redskins then made it all the way to 2nd and goal from the 1-yard line.

Then an odd play happened as Fielder fumbled the ball and it was recovered by Thatcher’s Jordan Herbert in the end zone. The officials conferred for a bit and then decided to replay the down for an unspecified reason and gave the ball back to St. Johns.

All that did was give some practice to Thatcher’s vaunted goal-line defense, which thwarted St. Johns on three consecutive attempts from the 1-yard line, culminating with Cooke sacking Sanchez for a loss after the quarterback mishandled the snap. 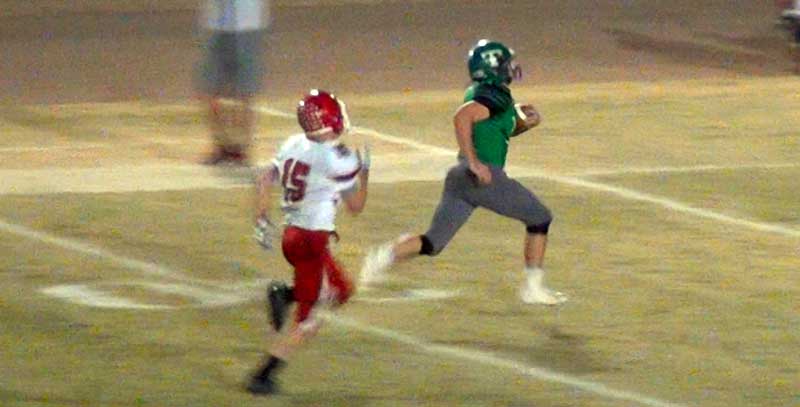 After Thatcher got some breathing room, Riley Morris set the Eagles up near the red zone with a 25-yard romp that had 15 yards tacked on to the end due to a horse collar tackle.

Backup quarterback Jack Kortsen then hit Javan Montoya in the flat, and Montoya turned it upfield for a 19-yard touchdown. While not known for throwing the ball, Thatcher’s quarterbacks were nearly perfect on the night with Kortsen having one incomplete pass and each tossed a TD.

With time running out in the second quarter and facing a 4th and 11, Sanchez threw up a 30-yard bomb that was hauled in by Kyren Ulibarri at Thatcher’s 5-yard line with just 15 seconds left in the half. Sanchez then hit Fielder with a 5-yard touchdown to avoid the shutout.

After handling an onside kick attempt, instead of taking a knee and going into halftime with a 33-6 lead, Thatcher handed the ball off to Morris at its own 49 with just 12 seconds on the clock and the racehorse looked as if he might break it all the way but was just tripped up at the 6-yard line.

But wait, there was 1 more second left on the clock, and after a Thatcher timeout, Morris took the handoff again and zipped into the end zone. A Conner Russell extra-point gave the Eagles a comfortable 40-6 lead at halftime. 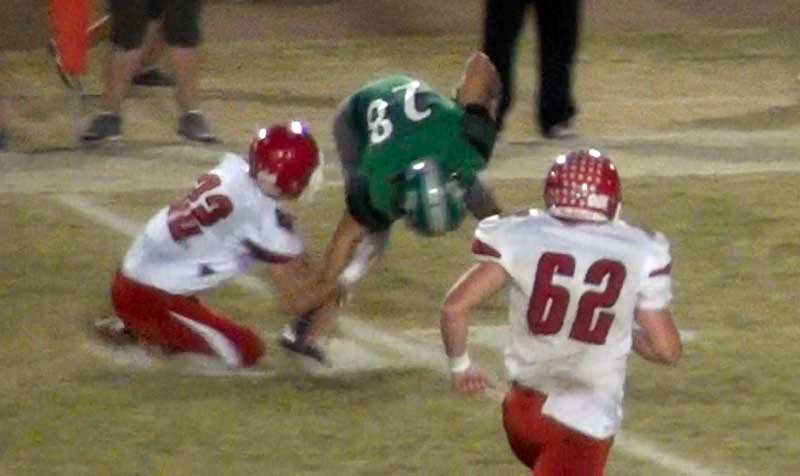 St. Johns then received the kickoff in the third quarter, but they didn’t have it for long.

After a nice run back by Ramsey, Gavin Bryce put his helmet right on the ball, removing it from Ramsey’s possession. Johnny on the spot Morris then scooped it up and bounded 30 yards before being caught from behind by Ethan Jessop at the 1-yard line. Morris would punch it in on the next play.

“He just caught me because I ran over him,” Morris said about the play. 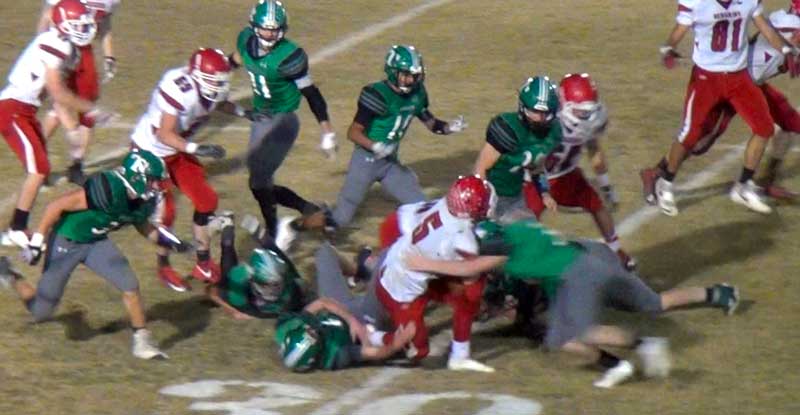 After the fumbled kickoff, St. Johns had a deep throw intercepted by Roebuck and also punted in the third quarter while Thatcher continued to score. After a big 48-yard quarterback keeper by Kortsen, Brock Jones hopped and skipped his way 23 yards up the middle for Thatcher’s final score of the night.

Ramsey added a late 15-yard touchdown in garbage time, and then Thatcher ran out the clock to leave the field with a 55-14 victory. 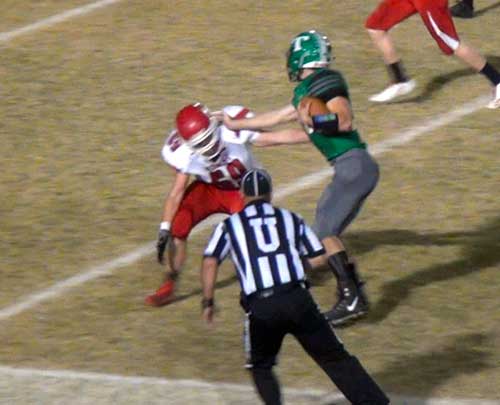 Jon Johnson Photo/Gila Valley Central: Morris tosses Tate Skousen to the side on his way to the 1-yard line after picking up a fumble on a kickoff.

“I don’t see anybody beating them, to be honest with you,” Morgan said. “I see them repeating unless it’s Round Valley. You know, Round Valley (has) the kids and maybe the coaching staff to do it, but it’ll be tough.”

After the game, Gila Valley Central asked Morris what he thought about the team’s chances against undefeated Phoenix Christian.

“I think we will play pretty good against them with our effort we played tonight,” Morris said. “We played pretty awesome.”

“They’re a good team, and we like that style of football,” Hinton said. “That’s kind of our kind of party. It’s going to be a battle, but I think our boys are up to the task.”

Round Valley is Thatcher’s only blemish this season, beating the Eagles at the roost 20-6 on Oct. 20. 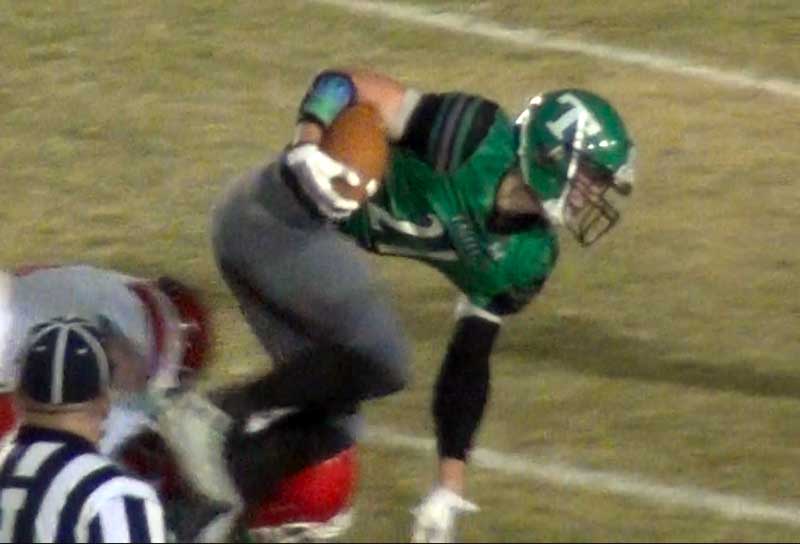 If the Eagles beat Phoenix Christian, it would either be a rematch against last year’s championship game with Round Valley, in which, of course, Thatcher was victorious, or a rematch of Thatcher’s semifinal game last year against Santa Cruz Valley, which came down to a stupendous goal line stand for the win.

Either way, the ball bounces Saturday, family and friends are bound to be in for a couple of exciting games after going through blowouts in the first two rounds.