Contributed Photo/Courtesy Forest Service: The Frye Fire was listed at 88 percent containment as of Wednesday morning and Forest Service officials want the public to know that while the fire burned more than 48,000 acres, a good portion of the mountain escaped fire damage. This picture shows the Riggs Lake area and was taken July 8.

MOUNT GRAHAM – The Frye Fire was listed at 88 percent containment Wednesday morning as it increased only two acres from the previous days’ estimate to 48,443 acres. It has cost roughly $24.1 million to fight the fire to date. 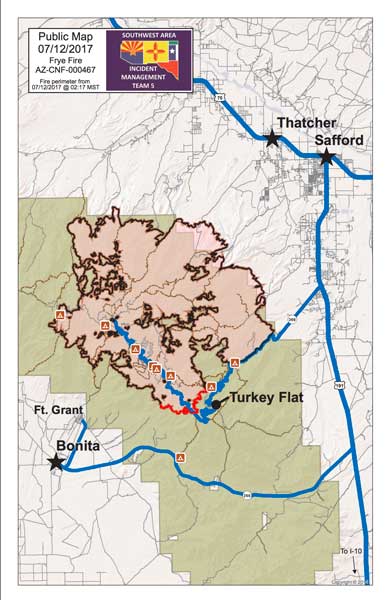 The Frye Fire was started by lightning at about 2:45 p.m. on June 7. Gila Valley Central has been committed to providing daily updates on the situation and will continue until the fire is declared totally out, which could happen this week.

Mount Graham has received rain the past couple of days that has significantly assisted in the firefighting efforts by dousing flames and allowing for high relative humidity recovery at night. The area is expected to continue to receive moisture through Thursday.

With the rain comes the threat of monsoonal floods off the mountain, however, and the municipalities of Safford, Thatcher and Pima, along with Graham County, are preparing in case of such an event. With two watersheds coming down the mountain and joining in the middle of Pima, the small town on the western side of the Gila Valley has the most potential for flooding. Gila Valley Central will follow this article with one about Pima and what it’s doing to mitigate flood possibilities.

Additionally, the Graham County Board of Supervisors has declared a state of emergency for Graham County, freeing up the possibility of federal funds to help.

Mount Graham remains closed to the general public and workers from the Arizona Department of Transportation have been clearing fire-generated flood debris from Highway 366 on a daily basis to allow firefighting efforts to continue. However, the Lebanon Reservoir was opened to the public Tuesday.