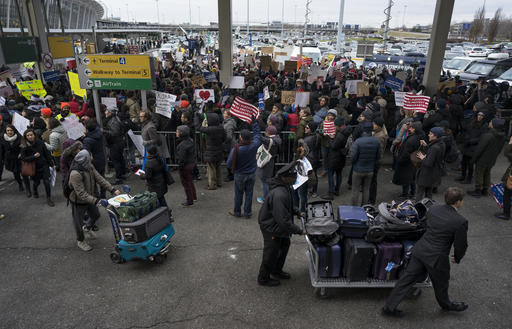 People with luggage walk past protesters assembled at John F. Kennedy International Airport in New York, Saturday, Jan. 28, 2017 after two Iraqi refugees were detained while trying to enter the country. On Friday, Jan. 27, President Donald Trump signed an executive order suspending all immigration from countries with terrorism concerns for 90 days. Countries included in the ban are Iraq, Syria, Iran, Sudan, Libya, Somalia and Yemen, which are all Muslim-majority nations. (AP Photo/Craig Ruttle)

An Iraqi pleaded for his life to President Donald Trump. A longtime New Yorker, born in Syria, wondered how he would get home from a trip abroad. Church groups, geared up to welcome refugee families, looked in dismay at homes prepared for families that may never arrive.

Despair and confusion set in Saturday among citizens of seven predominantly Muslim countries who found themselves abruptly unable to enter the United States a day after Trump signed an executive order that he billed as a necessary step to stop “radical Islamic terrorists” from coming to the U.S.

Included is a 90-day ban on travel to the U.S. by citizens of Iraq, Syria, Iran, Sudan, Libya, Somalia or Yemen and a 120-day suspension of the U.S. refugee program.

An unknown number of travelers from those nations were detained at U.S. airports after their flights landed, including tourists, foreign students and people trying to visit friends and family.

“What’s next? What’s going to happen next?” asked Mohammed al Rawi, an Iraqi-born American citizen in the Los Angeles area, after his 69-year-old father, coming to visit his grandchildren in California, was abruptly detained and sent back to Iraq after 12 hours in custody. “Are they going to create camps for Muslims and put us in it?”

Refugee-rights groups and others immediately challenged the orders in court, and said the bans scapegoated Muslims and Arabs without making the United States safer.

Protests broke out at several U.S. airports where travelers were being detained, including a gathering of several hundred people outside San Francisco’s main airport and a raucous demonstration of at least 2,000 people at New York’s Kennedy International Airport.

A big crowd of demonstrators also gathered outside a U.S. courthouse in Brooklyn where lawyers for the American Civil Liberties Union were trying to get a judge to issue an order blocking detentions.

Trump’s order came down as Hameed Khalid Darweesh, a translator and assistant for the U.S. military in Iraq for 10 years now fleeing death threats, was just minutes away from landing at Kennedy. He was among at least a dozen people detained after their arrivals Friday and Saturday.

After lawyers for refugee-rights organizations filed emergency petitions in federal court for their release, Darweesh walked free, to the applause of sign-waving demonstrators.

“This is the soul of America,” Darweesh told the crowd and reporters, adding that the U.S. was home to “the greatest people in the world.”

Others were less lucky. Parisa Fasihianifard, 24, arrived after a long trip from Tehran, Iran, only to be detained and told she had to go home.

“She was crying and she told me she was banned to come inside and go through the gates,” said her husband Mohamad Zandian , 26, an Iranian doctoral student at Ohio State University. He was hoping to get her out of the country on a late night flight to avoid her being jailed until Monday.

Staff at U.S. agencies that resettle refugees were scrambling to analyze the order and girded for the wrenching phone calls that would have to be made to the thousands of refugees just days away from traveling to the U.S. Several staff who spoke to the AP burst into tears as they contemplated the future for people who had waited years to come into the country.

The International Refugee Assistance Project, which aids foreign nationals targeted for their work for the U.S. government as well as other refugees, was sending the same message to asylum-seekers, most of them who had been waiting for years.

Meathaq Alaunaibi, also a refugee from Iraq, was hoping to soon be reunited with her twin 18-year-old daughters who are in Baghdad. Alaunaibi, her husband, a son and another daughter were settled last August in Tennessee, as the twins completed their government review to enter the U.S. After Trump signed the order, she spoke by phone with her daughters.

“They are so worried and afraid because they’re stuck there in Baghdad,” Alaunaibi said Saturday. “They are young and they are strong, but I am crying all the time. I miss them.”

An Iraqi in Mosul, an Iraqi city where the Islamic State group had seized control, despaired at word that what he had thought was an imminent flight to safety in America was now canceled, indefinitely.

“If you can write to Mr. Trump or find any other way to help me reunite with my family, please, I am dying in Iraq, please,” the man, whose identity was withheld because he is still in danger in Iraq, wrote back to his U.S. lawyer by email.

Kinan Azmeh, a clarinetist born in Syria who has lived in the U.S. for 16 years, left his home in New York City three weeks ago for a series of concerts that included a date with cellist Yo-Yo Ma. Now, he doesn’t know if he will be able to return home.

“I don’t know what’s going on,” Azmeh told The Associated Press by phone Saturday from Lebanon. “It is home as much as Damascus,” he said of New York City. “I really don’t know how to react.”

Before Trump signed the order, more than 67,000 refugees had been approved by the federal government to enter the U.S., said Jen Smyers, refugee policy director for Church World Service. More than 6,400 had already been booked on flights, including 15 families that had been expected over the next few weeks in the Chicago area from Ethiopia, Eritrea, Iran, Syria and Uganda.

The bulk of refugees entering the U.S. are settled by religious groups, who organize churches, synagogues and mosques to collect furniture, clothes and toys for the refugees and set up volunteer schedules for hosting duties. All that work ground to a halt after Trump signed the order.

In Massachusetts, Jewish Family Service of MetroWest had been coordinating a group of doctors, community leaders, a local mosque and other volunteers to resettle 15 Syrian families, including a 1-year-old and 5-year-old who arrived Tuesday.

Now, two fully outfitted apartments remain empty and it’s unclear when, if ever, the other refugees will be allowed to enter, said Marc Jacobs, chief executive of the Jewish service group.

Nour Ulayyet of Valparaiso, Indiana said her sister, a Syrian living in Saudi Arabia, was sent back after arriving from Riyadh at Chicago’s O’Hare International Airport on Saturday and told she couldn’t enter the U.S. to help care for their sick mother. Ulayyet said some officials at the airport were apologizing to her sister, who had a valid visa.

“My mom was already having pain enough to go through this on top of the pain that she’s having,” Ulayyet said.