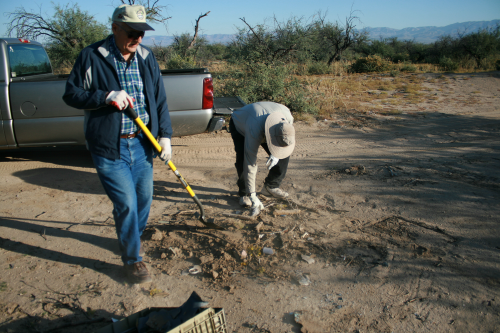 Saturday morning was cool and crisp at 6:30 a.m. at the Glenn Meadows park in Safford where volunteers organized to take on the projects for the Graham County Make A Difference Day. Volunteers met at the park, chose their assignments and picked up a box of plastic bags, gloves and a case of water. The volunteers worked on several areas including illegal dumping sites on Cluff Ranch Road near Pima and Frye Mesa Road near Thatcher. 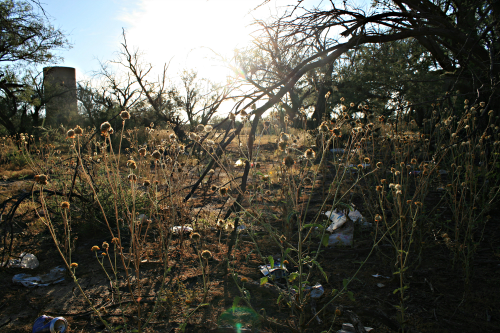 Robin Smith and Wendell Carter chose to work on the Cluff Ranch Road illegal dump site, and headed to the area at roughly 7:15 a.m. On the back end of Pima, the illegal dump sits beside the old silos. Smith told Gila Valley Central that he had lived in the Gila Valley for a very long time and the silos had been in existence when he was a child. This was his first time volunteering for the event, which has gone on locally since 2013. 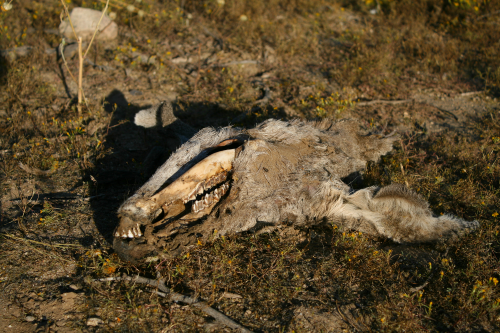 “The Bigler family was located here where these silos are,” Smith said. “This is the first time I worked with them. Of course, everybody cleans up a little bit from time to time. I didn’t realize that it was this bad. I own property out here a little further on the road myself. I haven’t come out in this area for quite a while. Just driving around out here is a total mess. A lot of people have dumped all kinds of garbage; it’s like a wild dump out here. There’s tires, couches, beds, old tvs and all kinds of stuff like that (is) strung around out here (where) people apparently decided that it’s a good place to put their trash instead of taking it to the county dump where they have to pay a fee to unload.”

The Make A Difference Day is a national event that occurs every October. In the Gila Valley, the Graham County Make a Difference Day was formed after a successful cleanup of the Solomon area in May, 2013. The Make A Difference Day group is a nonprofit organization.  The event encompasses each local municipality and the county. Nothing is required to volunteer with the MADD group, however, it is advised that any volunteer should bring a hat, sunscreen, gloves and water. 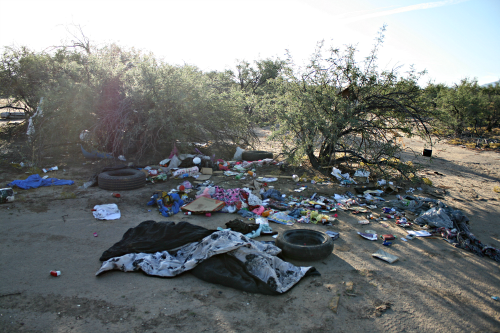 Brooke Curley Photo/Gila Valley Central: This pile is just one of many heaps of trash volunteers worked on cleaning.