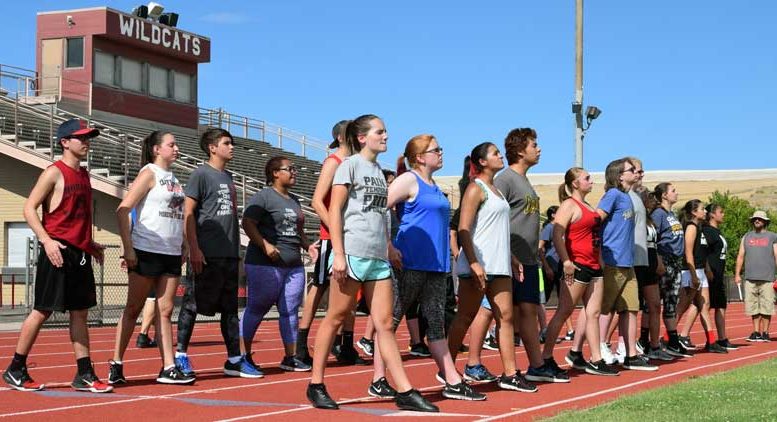 MORENCI – The Morenci Pride Band’s preparation for the upcoming season included a week of conditioning plus a week of marching and music fundamentals prior to the start of classes July 26.

A four-day fundamentals marching and music camp the week before the start of classes totaled 23 participants for some sessions, or half of the students enrolled in the class.

Photo By Raymundo Frasquillo: Band members run a couple of laps daily during the conditioning week.

Conditioning was addressed the prior week, July 10-13, to help build stamina and endurance.

“It takes a lot of both to carry, march, and play an instrument,” sixth-year band director Jared Collins said. “The conditioning forces muscle use. Nobody touches on muscles.” 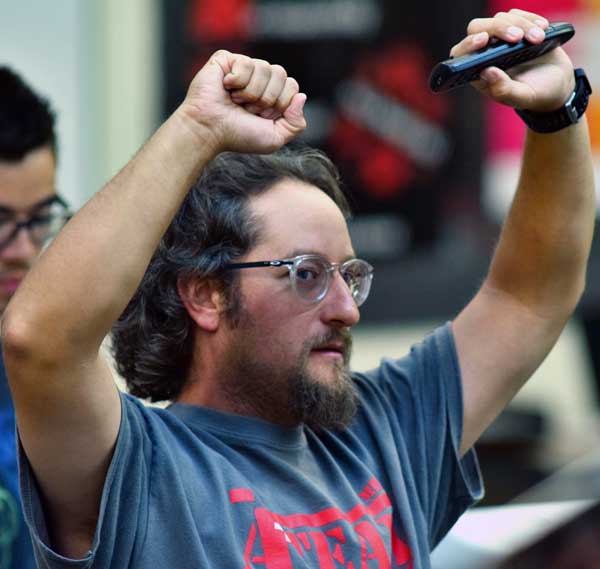 Photo By Raymundo Frasquillo: Sixth-year Morenci Pride Band director Jared Collins listens during a rehearsal to identify what to address.

“Nobody I know does a week of conditioning,” assistant camp instructor Eric Rangel said. The Las Cruces resident has helped programs in Texas and New Mexico and said he has yet to see another program perform conditioning.

Photo By Raymundo Frasquillo: New Mexico resident Eric Rangel, center, helped the percussion section with their music. Sophomore A.J. Hudman, left, and freshman Lindsey Hunter go over a phrase as Rangel shows how it should be played.

“I changed our movements and marching style, we’ll carry a different look that will make us look bigger,” Collins said. “I’ll have to re-teach the ones not in camp when classes start. Our music arrived later than it usually does so we haven’t really had a lot of time to go over it very much.”

The bottom line is “the camp participants enjoy playing music and want to be better musicians,” Collins said.

A late afternoon rain saturated the field and forced the camp to perform indoors, with a sizable audience in attendance.

“I’ve attended all four years,” Castillo said. “I was taught quite a bit individually and several techniques in our (instrument) sectional.”

“It is definitely one of the more important parts of being in band,” said Diaz who also attended camp all four summers. Missing camp “takes time out of practice sessions when school starts, it slows them down.”

“Band is a second home, we’re all family,” Diaz said. “We’re capable of being at the top in the state. I wouldn’t have done anything differently if I had to do it over.”

“It helps connect with others,” third-year camp participant Arvizo said.

“The camp shows us how to get the best performance despite our physical size,” three-year camp participant McCarthy said. “We’re shown how to solve problems, work with people, and the level of friendship is crazy.”

“I love music and love playing in the marching band,” second-time camper Potter said. “I enjoy all types of music.”

Photo By Raymundo Frasquillo: Senior Matthew Potter practices on a bass guitar with the band campers.

The Pride Band has earned three consecutive Superior ratings at a nearby marching competition under Collins and was a state champion in 2011. Collins was up for 2016 Greenlee County “Teacher-of-the-Year,” nominated from a pool including 106 teachers under contract in eight county schools.

The Pride Band concludes its marching season in the Holiday Bowl during late December, having previously participated in 2013.

Photo By Raymundo Frasquillo: A July 20 group performance was moved inside after a summer shower soaked the field. A small audience was on hand to listen as this year’s drum major, Ruben Valle-Ramirez, directed the camp band.