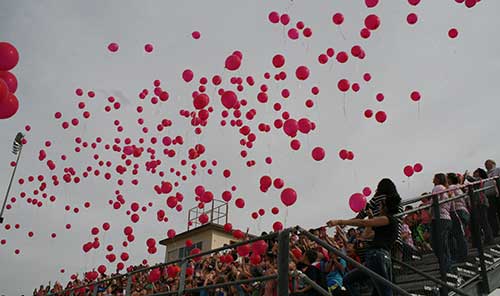 PIMA – The sky above Pima was colored red with hundreds of balloons Monday as the Graham County Substance Abuse Coalition kicked off its anti-drug Red Ribbon Week.

Red Ribbon Week stresses the importance of being drug-free. This year, the Graham County Substance Abuse Coalition worked with the Pima School District to bring about this year’s balloon release. Kathy Grimes, director of the coalition, arrived at the school early to fill balloons with helium. 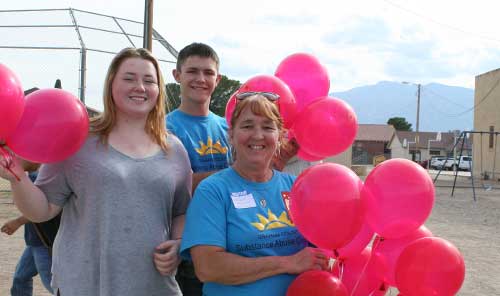 “The finishing number of balloons was about 430,” Grimes said. “We do everything we can to educate the youth of our community (because) we want them to grow up healthy and happy and drug-free. The red balloons kicked off Red Ribbon Week, and they all pledged to be drug-free.”

Grimes said this was not the first time the coalition had held a massive balloon release. Initially, Grimes wanted to hold the balloon release in Thatcher but students in that district with latex allergies put the kibosh on holding it there. Grimes considered holding the release in Safford but decided against it because of the complications resulting from the rain and hail storm at the beginning of the month. She said everything is hectic for the Safford School District as it is and didn’t want to add to the situation. Ft. Thomas was the other option, but they already planned out their Red Ribbon Week.

“One year we did it and we took all the kids out to the playground and had them spell out ‘Pima’ and then had them all launch them,” Grimes said. “We’ve done one in Fort Thomas too.”