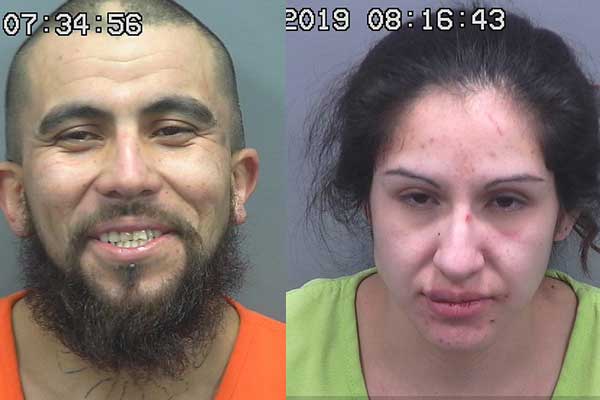 SAFFORD – Officers were dispatched around 2:30 am last Saturday to a residence on 6th Avenue regarding a disturbance. When an officer arrived, several individuals were found getting into a vehicle about to leave the area. The officer spoke to one of them about what was going on and it was reported that some people in the house were fighting so several of them had decided to leave. While the officer was speaking with the individual, additional officers could be heard yelling in the house at an individual, later identified as Christopher Garrobo. Garrobo was given commands by an officer to get on the ground, however, he would not comply. The officer from outside came in the house and assisted with placing Garrobo into handcuffs. A fixed blade knife was recovered from Garrobo’s belt and he was escorted outside and placed in the back of a patrol car. Garrobo was intoxicated and upset and had been heard by authorities yelling at another individual in the house while banging things around. After determining it was Garrobo’s residence, Garrobo was instructed to go inside and not cause another disturbance.

Shortly after authorities left the residence, officers were dispatched again regarding another disturbance at the residence. Upon arrival, Garrobo could be seen walking around inside the house with his entire hand covered in blood, running down his arm and onto the floor. The officer instructed Garrobo to open the door, however, Garrobo instead locked it and walked into another room where the officer could no longer see him. Because of the amount of blood and for the safety of other individuals possibly in the house, authorities felt it necessary to get inside. Meanwhile, officers heard Garrobo banging on the back door of the adjoining residence and the door open and shut.

When officers spoke with the neighbor, identified as Natasha Garcia, she stated Garrobo was not in her house. An officer asked if he could come inside, but Garcia stated “no” because her small kids were in the house. The officer explained it was important for them to come in and make sure everyone was okay. Authorities could also see a broken window and because there was an injured person and concern for the welfare of the children, officers insisted Garcia open the door, which she did. When Garcia was asked to step out, she said that she wanted to go get her kids. Garcia was told again to come out of the house, but instead, she walked back into the house and turned the corner to go down the hallway. An officer again told Garcia to go outside and grabbed her by the arm to bring her out. Garcia began hitting the officer with closed fists. Additional officers were called to assist as Garcia continued to fight back causing her to be pushed to the ground and eventually handcuffed. Authorities announced for everyone to come out of the house, and when Garrobo came out of a room, he was placed into custody. The father of the children was contacted in the back bedroom and the children were turned back over to his care after the incident.