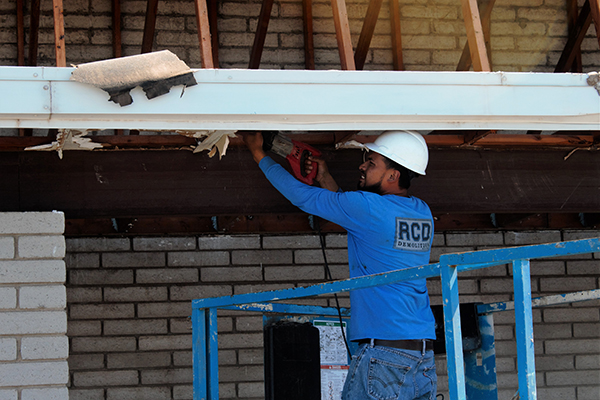 Jon Johnson Photo/Gila Valley Central: A demolition employee works on dismantling the façade at the Mt. Graham Shopping Center. The center’s new updated façade should be in place before Christmas.

SAFFORD – The façade of the Mt. Graham Shopping Center is being renovated and should be finished just in time for Christmas. 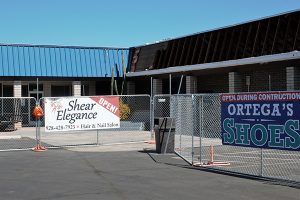 Jon Johnson Photo/Gila Valley Central: While a chain link fence keeps the public safe, businesses at the shopping center are still open during the construction.

The shopping center, located at the intersection of 20th Avenue and U.S. Highway 70, previously resurfaced half its parking lot in 2011. The southern half was put on hold to pour two restaurant pads, but that has yet to come to fruition.

Chain link fencing encircles the stores, but everything is still open during construction and there are walkways to the stores’ entrances.

Bob Reyna, the project superintendent for the renovation, said the façade will be updated to look like other local modern shopping centers with a stucco finish. The project will also add a new, taller parapet and should be completed about two weeks before Christmas. 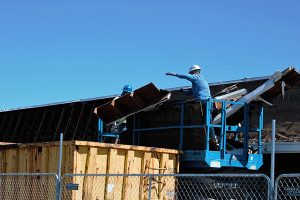 The one part of the center that won’t be updated is the old Jerry Lewis Theater at the center’s southern end. The building, which first brought movies to the shopping center in the 1970s, will be totally dismantled to make more parking areas.

“We’ll take out all the foundation and then backfill it and pave it,” Reyna said.

The demolition and construction teams are staying in the area during the work week, utilizing local businesses to meet their daily needs.

“We appreciate the work here in Safford,” Reyna said.