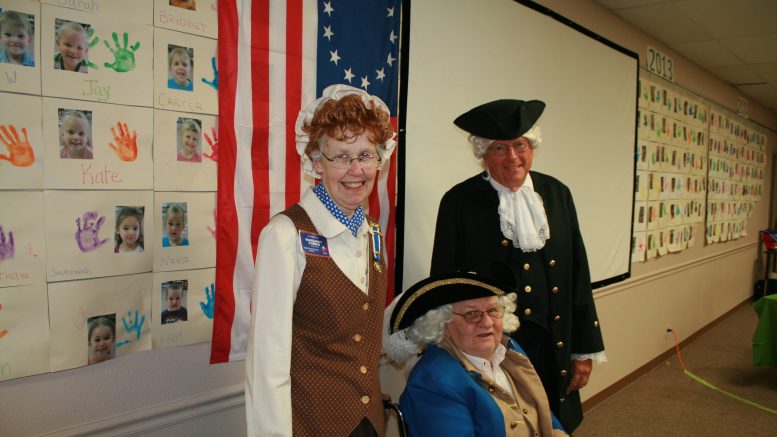 SAFFORD – It’s impossible to time travel, but the Daughters of the American Revolution (DAR) and the Friends of the Library did their best to present a historic experience during the Safford City-Graham County Library’s Constitution Week event, Wednesday.

Eastern Arizona College (EAC) instructor and history enthusiast John Ratje portrayed John Hancock in the special event. After the beginning remarks, the attendees were shown a Powerpoint and video presentation created by Ratje.

The presentation, which took Ratje more than two years of research and development, featured information and quotes about the events surrounding the signing of the Declaration of Independence. Toward the end of the presentation, attendees read historical biographies of the signers of the declaration, whose lives were forever altered by that historical event.

When asked how he got started in the production of his historical presentation, Ratje said that he became interested in history as he became older.

“I’ve always been interested in history later in my life, and Civil War history has always been a big thing,” Ratje said. “I did a presentation on the Declaration of Independence and I gave that to the DAR. They asked if I could expand that to include the Constitution and (I said) ‘Sure, what a great thing to do.'”

Ratje told Gila Valley Central that he believed the historical aspect of the signing of the Declaration of Independence to be incredibly relevant to today’s political environment.

“It was a difficult time,” he said. “There (were) 50 that wanted reconciliation and 50 that wanted freedom and independence. (It was) very similar to what’s going on in the political scene today. It’s amazing that they were able to do this and pull it off. It was a difficult process because they were against one of the world’s toughest armies. The British army was well thought of in those days.”

Not only did Ratje say he was a history enthusiast, but also an individual interested in leadership technique.

“George Washington and his leadership staff pulled it off,” he said. “I’m always interested in leadership, so there’s a lot of leadership methods that you can derive from studying a little bit about these people.”

During the event, Ashlyn Herbert, a Safford High School student, recited her winning essay titled, “My American Heritage: What it means to me as I go forward to serve as a citizen of the United States.”

Herbert won a $500 scholarship to Eastern Arizona College from the local DAR chapter with her essay. The DAR raised the money for the scholarship by selling chocolate strawberries. It was the local DAR’s first essay contest.
Bonnie Briscoe, DAR Gila Valley Chapter Regent, said the local chapter was immensely pleased with the results of the essay contest.

“This is the first one our chapter has done,” Briscoe said. “Our chapter has been in existence for two years, and we’re one of 41 chapters in the state of Arizona.”

Below is Ashlyn Herbert’s award-winning essay:

My American Heritage: What it means to me as I go forward to serve as a citizen of the United States

The famous painting of Washington crossing the Delaware Christmas Eve night is the “Capture of Trenton”, where Conrad Kremmer, a Hessian soldier, became a prisoner of war by the Colonial Army. He defected shortly after and within less than a year was promoted to personal body guard to General George Washington

Technically, the majority of Hessian soldiers during the Revolutionary War were not mercenaries (volunteer soldiers) but conscripted soldiers (compulsory duty); This is an important difference. Back then, Germany did not exist., instead it was known as “Prussia.” Prussia was loosely constructed of a whole bunch of different fiefdoms, or small city-states, all of which were financially struggling. Some of them were as tiny as a common single American House and yard plot. Landowners were almost exclusively, to some level, aristocracy, and related to the royal family. As such, they had total authority over the people who lived on their land and provided labor to the landlord. As subjects of the landlord, they had no choice in negotiation between the landlord and the British Crown about the contract to provide personnel for the war in the Americas. The statistically largest contributing Prussian state was Castle-Hess, where Conrad came from. Many of the Hessians never even saw a paycheck for their sacrifice because their wages were directed to their lord back home. By the war’s end, Congress offered soldiers farm land, two pigs, and a cow to Hessian deserters, along with citizenship; a much brighter future than the one those who returned would have had.

Conrad was not just and ordinary Hessian soldier; he was a “Grenadier”. These were the black ops or Rangers-equivalent elite fighting force in the day. They were hand-selected for training because of their size and strength. Therefore, we can be confident that Conrad was an exceptionally notably physical specimen in a time period when European males were an average height of around 5’6. He must have been very tall and very muscular or endowed with physical aptitude and talent to be trained as a Grenadier. This is the French word for grenade, and they did use cutting-edge weaponry not available to the common foot soldier, including incendiary and crude explosive devices. The miterer metal cap they wore exaggerated their height to create a most imposing adversary. Many battles were over before they began once the Grenadiers showed up. Their presence created such fear and panic, that the opposition took flight without a shot. One can conclude that Conrad’s elite status and training as a Hessian Grenadier was welcomed as a great advantage to the rag-tag, starving and boot-less Continental forces, and must have been one of the reasons he was assigned the prestigious position as Washington’s bodyguard so quickly after serving with the enemy.

About a whopping three-quarters of the Hessians who fought here and survived the conflict decided to stay in America. Not only were most of them single men with nothing to lose, but they were electrified by the freedoms represented in the Colonies. They were amazed by the opportunity they saw available to Americans, particularly land ownership, which was unheard of in their homeland. Keep in mind, no country in the history of the planet had ever been founded on ideology! Until 1776, everything was organized by bloodlines or tribal affiliations. America proposed allegiance based on a concept. This was a hugely revolutionary and radically liberal thought process back then.

Conrad Kremmer was my seventh great-grandfather. My family descended from his youngest daughter, Mary Kremmer. I am proud to be an American and realize my freedoms are not free. Knowing about my ancestry is an important aspect that many young people have lost an appreciation for. I have an extreme love for our nation, and I have a deep appreciation for the sacrifices that were made in the formation of our great nation, which means acknowledging the sacrifices made by our forefathers. In my patriotic spirit, I have the desire to keep the flame of love of country alive. I will serve my country as a productive citizen and pray my influences will leave lasting impact on my posterity.