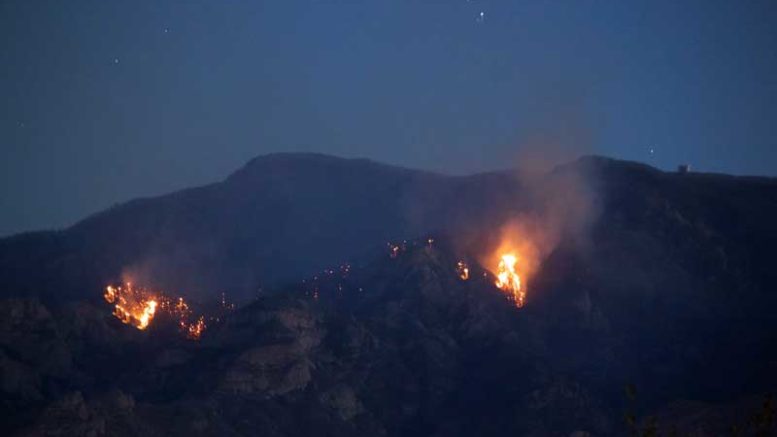 Jon Johnson Photo/Gila Valley Central: The Frye Fire's eastern and western edges can be seen in this picture from June 11. The western flank expansion has caused the closure of the top portion of Mount Graham effective Thursday at noon.

MOUNT GRAHAM – The top of Mount Graham from the point where the pavement ends just past Shannon Campground all the way to Riggs Lake will be closed for the Frye Fire effective Thursday at noon.

“They’ve expanded the closure to include the campgrounds,” Smokovich said. “Shannon will still be open, but everything above that point will be closed.” 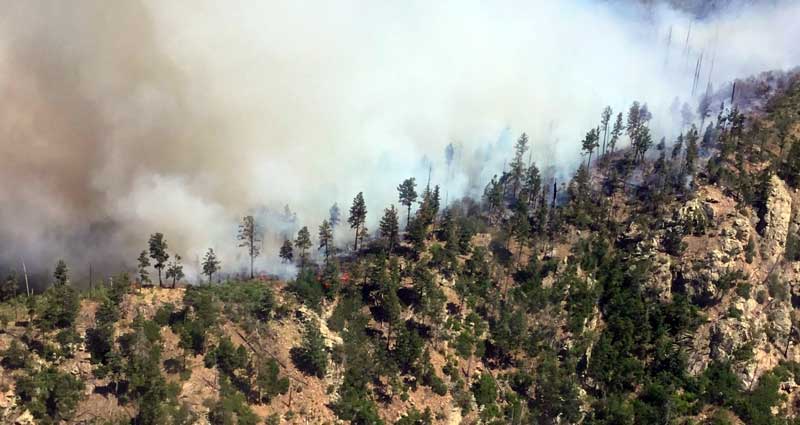 Contributed Photo/Courtesy U.S. Forest Service: This aerial photo shows some of the terrain and fuels being burned in the Frye Fire. Officials have issued the closure as a proactive move to avoid a quick evacuation of the area.

An infrared flight over the area Tuesday night showed the fire has grown to about 720 acres and has come roughly 1.5 miles from the Columbine area. It is the western flank expansion that prompted the precautionary closure. A helicopter has started to do bucket drops on the Ash Creek side of the fire, but Smokovich said the water is only checking the spread of the fire and will not halt it. The area is extremely hazardous for the insertion of personnel, with numerous downed logs, standing dead trees and other obstacles in rough terrain.

“It’s in that Ash Creek drainage,” Smokovich said. “With the winds that we’re predicting and the heat that’s coming and the dryness and the fact it’s in that drainage with some unburnt fuels from the Nuttall Complex in there, they are concerned it could start moving up the mountain. We wouldn’t want to have people there from a safety standpoint.”

Moving up the mountain means moving up toward Columbine and toward the Mount Graham International Observatory, which is even closer to the fire than Columbine but has separate topography that makes it more insulated. Additionally, the fire suppression team has been vigorously building fire lines to protect the assets on the mountain, including the cabins, bible camp and the observatory.

“They’ve done a lot of preparation work up there to protect that,” Smokovich said.

The Frye Fire was started by lighting the afternoon of Wednesday, June 7 and has been burning in the burn scar of the 2004 Nuttall Complex Fire. A second community meeting will be held at the Graham County Services Building at 921 W. Thatcher Blvd. on Friday, June 16 at 7 p.m.