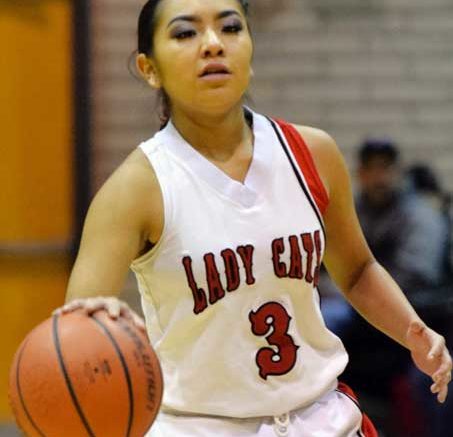 Last week, the Wildcats succumbed 27-55 to New Mexico Lordsburg in Morenci Jan. 2 and 34-58 to the Eagles in Thatcher on Jan. 5, and topped the visiting Bisbee Pumas, 40-15, Jan. 6. The Thatcher and Bisbee games were region contests. 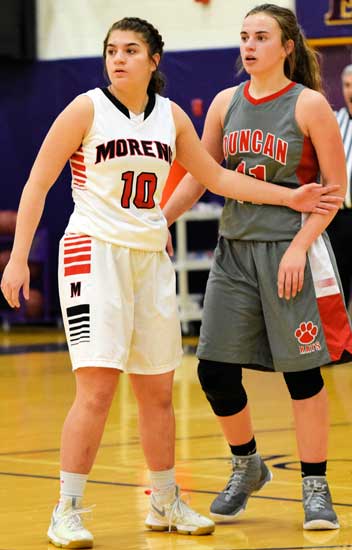 Photo By Raymundo Frasquillo: Freshman Hannah Pollock defends against an inside pass to Keeley Wagley of Duncan during a tourney game in Thatcher. Wagley scored three points and Pollock two. Duncan outscored Morenci 10-0 during the final 2:47, but Morenci won, 44-20.

The Wildcats broke a 3-game skid by jumping out to a 22-5 opening period outing versus the visiting Pumas. A 26-point halftime advantage, following a second-period defensive effort which held the Pumas scoreless, allowed the Wildcats to whether a 9-10 second-half deficit.

For Bisbee, Valdez had four points, Loya, Moore, and Villegas three each, and Loreto two.

Morenci outscored Thatcher 11-2 in the fourth period, but it trailed 23-56 at the start of the final eight minutes of play. Thatcher had double-digit scoring in each of the prior three periods, leading 17-6 after the opening period and 36-14 at halftime. 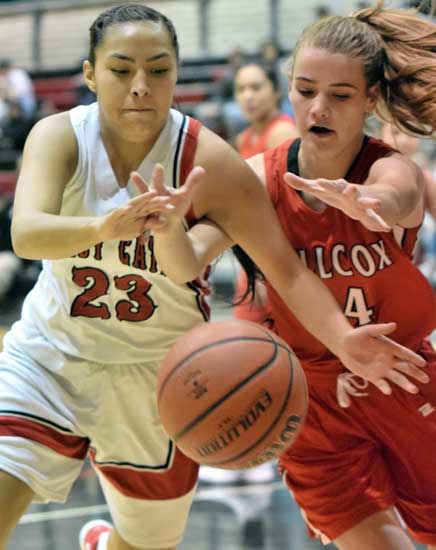 Photo By Raymundo Frasquillo: Senior Alex Chee battles for a loose ball with Willcox freshman Syndey Klump during a region pairing in Morenci Dec. 5, won, 42-40, by the Wildcats. Ten days later in Thatcher, the Cowgirls prevailed, 47-40, during a consolation round game of the 42nd Eastern Arizona Holiday Tourney.

The Wildcats shutout Lordsburg 6-0 in the fourth period, but trailed 8-17 after the opening period, 18-36 at halftime, and 21-55 heading into the final eight minutes of play.

“Not tonight,” surmised Coach Chavez as he walked off the court following the loss to the visiting Mavericks. 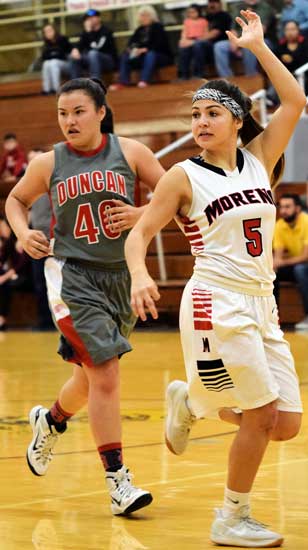 Photo By Raymundo Frasquillo: Sophomore Desiree Babb calls for the ball as she streaks to the basket against Duncan in Thatcher. Babb finished with four points.

Morenci doubled its offensive output in the second half, but it was not enough to overcome a 24-point, 9-33, first-half deficit. Cobre had double-digit scoring in each period, leading 14-5 after the opening period and 54-21 heading into the fourth period.

The gray-clad Wildkats outscored the white-clad Wildcats 10-0 in the final 2:47 of the game, but Morenci had double-digit scoring in three periods to withstand its 3-11 final period outing.

All 10 Wildcats contributed to the scoring total and Hernandez was selected to the all-tourney team. Chee had 14 points on four field goals plus 6-8 free throws. Hernandez and Lee added seven points apiece, Silvester five, Babb four, Martinez and Pollock two each, and Alvarez, Apodaca, and Lang one apiece.

A 9-14 fourth-period outing foiled a comeback and reversed the outcome of 10 days prior. Morenci led 9-4 following the opening period but trailed 19-21 at halftime and 31-33 at the start of the final eight minutes.

Morenci was held to single digits in each of the periods while the host Eagles scored in double figures in three periods. Thatcher led 7-3 following the opening period, 18-7 at halftime, and 31-14 heading into the fourth period.

For Thatcher, Angle got 21 points on nine field goals (two 3-pointers) plus 1-2 free throws and Bryce 10 on five field goals plus 0-2 free throws. Baldwin, senior Sydney Damron, and Rasmussen added four points apiece, and both Wakefield and Whitmer two each.

Recharged Wildcats outscore Tigers in second half for win