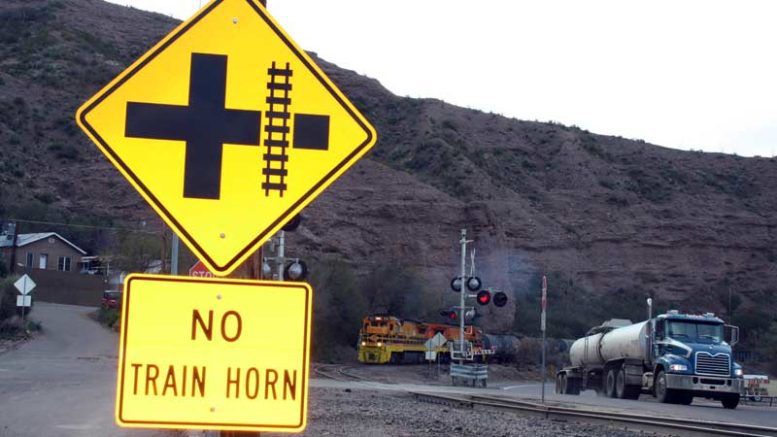 Photo By Gualterio Casias: An Arizona Eastern Railroad locomotive sits quietly on the outskirts of South Clifton as it honors the Quiet Zone in that part of town. The Clifton Town Council and the railroad worked out an agreement that went into effect in January 2017 in which AER locomotives do not sound their horns while traveling through South Clifton. There have not been any vehicle-train collisions. Crossing arms and bells at intersections have been adequate in advising motorists that the train is coming through.

No train-motor vehicle crashes have occurred

CLIFTON – It has proven successful and there has so far not been a downside to it. The Quiet Zone in South Clifton has indeed been effective. No collisions or other incidents involving Arizona Eastern Railroad (AER) locomotives and motor vehicles have occurred since the Quiet Zone went into effect.

The Quiet Zone is an area in which locomotives do not sound their horns at crossings.

It was particularly aggravating when the train came through town late at night or very early in the morning, well before the rooster on Shannon Hill began crowing to meet the dawn.

It took several months of negotiations between the town and AER to establish the Quiet Zone. The Clifton Town Council doggedly pursued the issue. The town started suggesting a Quiet Zone around 2009 and began making progress with the Federal Railroad Administration on the issue in late 2016.

Town officials pointed out that South Clifton is located in the narrow San Francisco Canyon in which sound carries easily, especially late at night. Many residents often complained about being awakened at such odd hours by the train.

Mayor Felix Callicotte was the chief advocate of the Quiet Zone. He was among those chiefly affected by blaring train horns. His home is located on Laine Blvd. which runs parallel to the train tracks.

“It almost seemed impossible to have the change made but we stuck with it hard and long enough to make a real difference,” he said.

He said some added safety issues may arise but he does not foresee any of great significance.  The signs and arms, or gates, at the railroad crossings should continue to make motorists adequately alert they are at a crossing or are approaching one.

The AER train now runs on a regular schedule. Locomotives, hauling several cars, sit quietly on the outskirts of South Clifton. At around 10:00 or 10:30 am., it begins moving toward the switching yard at the Clifton Train Depot, about a mile away. There are two crossings, outside of South Clifton, at which it sounds its horn. One is located close to the Rode Inn Motel and Veterans Park. The other is situated between the park and the depot.

The railroad plays a critical role in the local copper industry. Among services the AER provides is transporting materials to and from the Freeport McMoran, In., Copper mine in Morenci. The Morenci facility is the largest operating open pit copper mine in North America. FMI is a global giant in the mining industry. The Arizona Eastern is a major link in transporting copper anodes to other U.S. destinations. Anodes are large, flat plates of copper produced at FMI’s Solvent Extraction Electrowinning plant.

Copper materials are transported to the Clifton switching yard from the Morenci mine by the mine’s own railroad. From there, AER locomotives haul the cars to other destinations. When Phelps Dodge owned the mine, Southern Pacific Railroad did the long-range copper transportation. SP brought the cars into Clifton in the morning and left by late afternoon. Iowa Pacific bought what eventually became the AER from Southern Pacific around 2006.

FMI bought out Phelps Dodge around the time that late-night, early-morning hauling and the loud trains began in 2006-07.