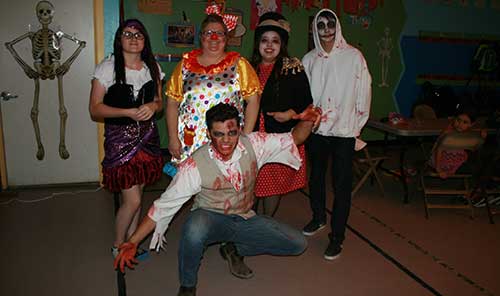 SAFFORD – If the Boys and Girls Club of the Gila Valley know anything, it’s how to have a spooky good time.

The club held its inaugural Carn-evil on Monday, which included a haunted house, games of dead fish and the zombie ring toss.

To the dismay of parents and teachers alike this year, Halloween was on a Monday. However, the Boys and Girls Club had the unfortunately-timed holiday under control with their first ever after-school Halloween carnival.

Director Shelly’e De Leon said the carnival was a reward for good behavior on the part of the students. For each good act, whatever it may be, the student was rewarded with a ticket to play in the games.

“Our members have been working for this for the last month,” De Leon said. “For positive and good behavior, the students earned a ticket – for example, for cleaning up – or being really quit when a leader was talking, they earned a ticket. They earned tickets for the whole month. Our highest ticket earner was 48 tickets. We had several of them that was in the top 40, nearly 50.”

Because it was the club’s first Halloween event, event staff were not expecting very much parent participation. However, De Leon said they were very pleasantly surprised when donated treats came flowing in from various local donors. Everything went according to plan, and the inaugural event when off without a hitch, except for the untimely death of the industrial-sized cotton candy machine the weekend before. With more than 100 members of the club expecting cotton candy the next day at the party, the volunteers had to do some quick thinking.

“We went and purchased a little $30 one (cotton candy machine) at Walmart,” De Leon said.  “It took us eight hours to finish up all the cotton candy because it would run for 30 minutes and then it would have to cool off for 10. We’d only get 10 bags out of the 30 minutes. But this is what I know, the kids are worth it.”

There was just enough cotton candy for all, and the inaugural Boys and Girls Club Carn-evil was a success through the work of the volunteers and staff.