Photo By Raymundo Frasquillo: Morenci junior John Olmsted uses his wide wingspan to come up with a rebound against Benson junior Bravon Berryhill. Olmsted totaled 14 points and Berryhill six. The Wildcats topped the Bobcats, 56-32, during a 2A East Region contest Dec. 1.

MORENCI – The Patrick Hepper-coached Morenci basketball boys opened the season with a trio of wins over Cochise County schools, 52-24 over the Tigers in St. David on Nov. 28,  56-32 over the Benson Bobcats in Wildcat Memorial Gymnasium on Dec. 1, and 49-39 over the Willcox Cowboys on Dec. 5.

The Wildcats next head to the 3-day Round Valley Invitational in Eagar on Thursday through Saturday, Dec. 7-9. The Whiteriver Alchesay Falcons and the Saint Johns Redskins are the first-day opponents, at noon and 4:30 p.m., respectively, while the Holbrook Roadrunners follow at noon on the second day prior to the start of the bracket.

Other teams slated to join the host Elks in the Round Valley Dome are the Fort Thomas Apaches, the Heber Mogollon Mustangs, the Holbrook Roadrunners, the Phoenix Arizona Lutheran Coyotes, the Pinon Eagles, the Safford Bulldogs, the Sanders Valley Pirates, the Show Low Cougars, and the Thatcher Eagles.

“We try to play at a pace our opponent is not used to and force them to do things they are uncomfortable doing,” Hepper said. “We’re 10-players deep.” 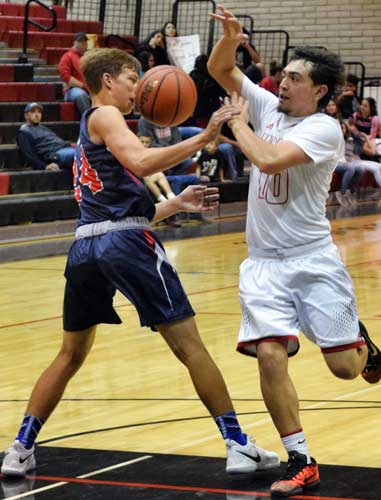 Photo By Raymundo Frasquillo: Morenci senior David Corona has the ball tipped from his control while driving to the basket. He had four points for the night.

The Wildcats did exactly that, forcing the Bobcats to hurry 13 shots from the floor plus a couple of free throws during a 13-minute span while taking a 32-point, 48-16 advantage with 8-16 floor (two 3-pointers) plus 7-11 line shots. Dominic Waters had seven points, Ryan Hates and Jordan Leonard five apiece, David Corona four, and both Christopher Leonard and John Olmsted three each.

Benson went scoreless for 13 minutes, 11 seconds adding its 16th point with 5:47 left in the second period to trail by five, 21-16. The deficit was 32 before the Bobcats totaled 18 points, with 36 seconds left in the third period.

Morenci enjoyed a 48-18 advantage heading into the final eight minutes.

A 17-point, 32-15, halftime margin was extended to 32, 49-17, following the third period as the Wildcats limited the host Tigers to two points while adding 17. Morenci led 13-8 following the opening period.

Wolves slip past Wildcats with no time left