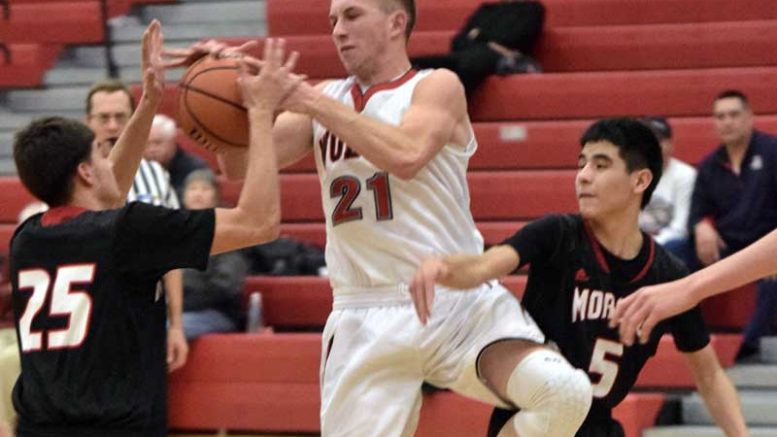 Sophomore defensive specialist Anthony Holguin released the third of a three-shot free-throw award with no time remaining on the clock. It fell through the net to break the deadlock. His jubilant teammates rushed the court as Saint Augustine Catholic edged Morenci, 57-56, Jan. 19.

Saint Augustine entered the contest as the fifth-ranked 2A team with a 7.8397 rating, while Morenci was eighth with a 7.1540 rating.

The teams seemed to mirror one another, maintaining their spacing throughout the contest, taking high percentage shots, drilling the open shots, helping one another defensively, sending multiple players for the rebounds and penetrating when the openings were there.

“Morenci is a good team,” Saint Augustine head coach Mike Reyna said. “It could have gone either way.”

“Both teams did a good job,” Morenci head coach Patrick Hepper said. “If you play the game long enough, you will win some close ones and lose some close ones. We’ll still practice tomorrow.”

Photo By Raymundo Frasquillo: Saint Augustine sophomore Anthony Holguin (12) sets his sights on making his third free throw attempt. He made it and the Wolves edged Morenci 57-56.

Holguin may have lost his concentration, blinked, not used his legs to push the attempts or not followed through after the release on his first two failed free-throw attempts. Perhaps he wondered is he would be the goat or the hero as he bit his jersey’s neck and stepped to the line for the final attempt.

Long after the scoreboard lights had been dimmed, Holguin still brandished an ear-to-ear smile, unable to utter a word. Instead of laying awake into the night wondering if he could have done something different, he would be able to get some sleep and take a life lesson to bed with him. If you do what you prepare yourself to do, the anticipated outcome should occur.

Holguin was at the free throw line because he drew a foul while attempting a 3-point field goal.

Before he shot his free throws, both teams had scored 22 field goals with eight 3-pointers plus four free throws; the home team sank 4-6 and the visiting team 4-7.

The score was tied nine times, five in the opening four minutes, twice in the second period with a halftime tie, once in the third period and the last in the closing seconds of play.

Morenci went on a 9-point run three minutes before the half ended, with John Olmsted getting four points and both Jordan Leonard and Andres Nofchissey three. The Wolves answered with a Max Fimbres’ 3-pointer to pare the deficit to six, but senior Edward Castellano gave the Wildcats an 8-point, 22-14, advantage to start the second period.

The home boys got 10 points, five from Andrew Reyna, three from Jose Maldonado, and two from Jacob Dygas, to take a 24-22 edge with 1:15 elapsed in the second period. Morenci reclaimed the lead on a Castellano 3-pointer, plus added five more – three by Nofchissey and two by Olmsted – before the Wolves answered with four from Chance Strawderman and two from Max Navarrete for a 30-30 tie with 2:02 left in the half.

The Wolves returned with a 3-pointer by Dygas matched by Castellano; followed by a 6-0 Wolves’ run, two by Reyna, two by Strawderman and two by Reyna before Olmsted added a basket.

Leading 44-40, Saint Augustine went on an 8-1 run to head into the final period with an 11-point advantage, 52-41. Fimbres added three field goals, including two 3-pointers.

The Wildcats went on a 10-0 run, with Olmsted and Chris Leonard adding four points apiece and Castellano two, during the first 2:30 of the fourth period.

A Maldonado free throw 25 seconds later halted the run and gave the hosts a 2-point advantage with 5:05 left. A Nofchissey 3-pointer vaulted Morenci on top, 54-53, and a Fimbres 3-point play with 2:10 left gave the Wolves a 56-54 advantage.

Olmsted paced the Wildcats scorers with 18 points on nine field goals; Castellano had 11 on five field goals, including a 3-pointer, and Nofchissey had three 3-pointers plus 1-2 free throws. Chris and Jordan Leonard both added six points, Ruben Little three and Kyle Swan two.

Morenci boys run past Tigers, Bobcats, and Cowboys for 3-0 mark