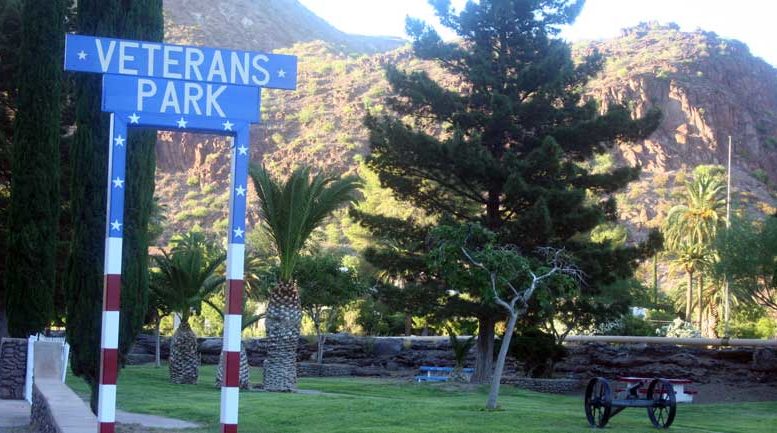 Photo By Gualterio Casias: A Memorial Day commemoration will be held at Veterans Park in Clifton at 10 a.m., Monday, May 29.

Event is scheduled for 10 a.m., Monday

CLIFTON – A Memorial Day commemoration will be held at Veterans Park in Clifton at 10 a.m., Monday, May 29. The event is organized by the Morenci-Clifton American  Legion Post 28. The public is invited and encouraged to attend.

The service includes the reading of all U.S. Armed Forces veterans who have passed away. That includes those who have died while in the service and those who died subsequent to their service. 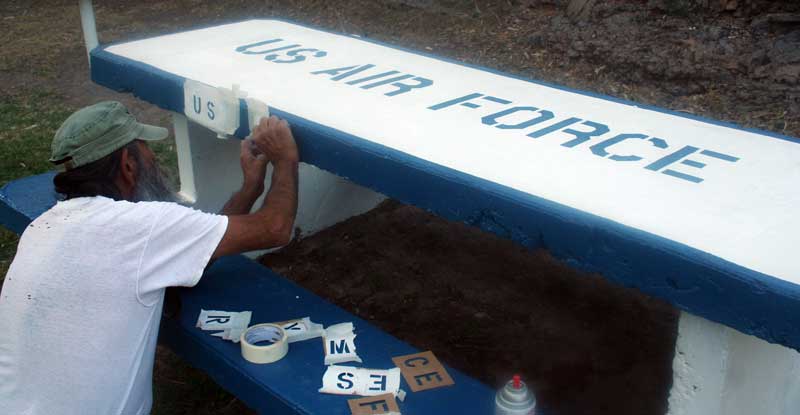 Photo By Gualterio Casias: Members of the Mares Bluff Veterans Memorial group put the finishing touches on tables at Veterans Park in Clifton. Each table is dedicated to one of the four major branches of the U.S. Armed Forces.

“That means any and everybody who served their country and is no longer with us,” a spokesman said. “There are many, many men and women who passed away long after they performed their duty. That includes those who served in time of war and those who served during peacetime. Attending the service is a way of saying thank you to those who served. We hope there will be a strong turn out by folks from Morenci, Clifton and Duncan and the surrounding communities.” 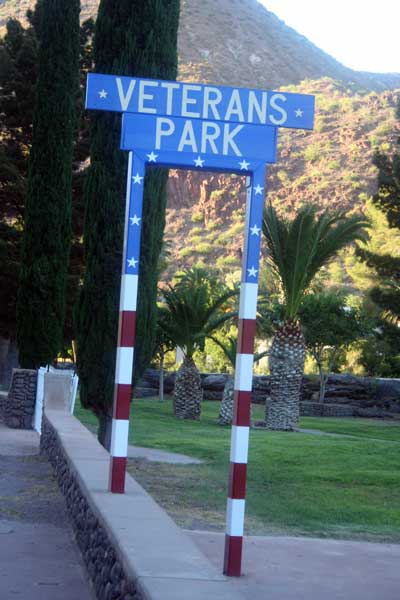 Those who not have noticed the improvements in the park will have the opportunity to do so. The park was built in 1985 by crew members of the Clifton-based Job Training Partnership Act (JTPA). There is a monument listing the names of crew members and supervisors. Other monuments were subsequently erected. The largest pays tribute to those who served their country. Members of the Mares Bluff Veterans Memorial Committee painted the cement memorials a bright white and polished the memorials’ tarnished plaques.

Atop one monument is a genuine World War II U.S. Army helmet. It was donated by Army veteran Emilio Membrilla, who served during the Battle of the Bulge, one of the major battles of World War II in the European Theater. Membrilla, of Greenlee County, survived captivity by the German army.

A smaller monument is dedicated to those Americans who gave their lives in service to their country.

The new Veterans Park sign stands out like a signal beacon. It is painted a strong red, white and blue. It replaces a shabby, weatherworn and faded wooden sign that was erected upon the park’s completion in 1985. The new sign is a cooperative effort of the town of Clifton and the Mares Bluff Veterans Memorial group. The town provided the material and Bluff Veterans Memorial members did the painting. The town’s public works deptartment erected the sign upon its completion. 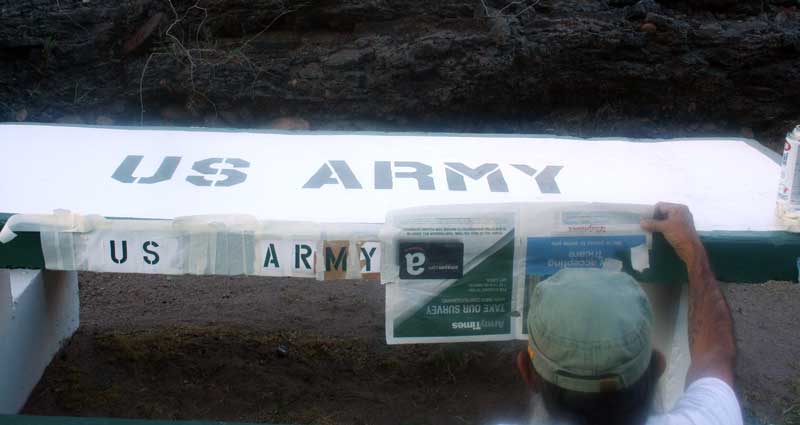 “It’s the town’s honor to participate in these major improvements to Veterans Park,”  Town Manager Ian McCaughey said. “It’s only appropriate to recognize and honor the many people from Greenlee County who have served our great country. We’re grateful to the Mares Bluff members for stepping forward and working hard to make these improvements possible. The new sign reading ‘Veterans Park’ is not only patriotic, it’s absolutely beautiful.”

There is more yet to be seen, used and enjoyed, according to McGaughey. He was referring to the park’s four cement picnic tables, which now have color and are tied into the the park’s theme.

“The tables were a drab cement gray,” McGaughey said. “They didn’t look at all attractive but they certainly do now.” 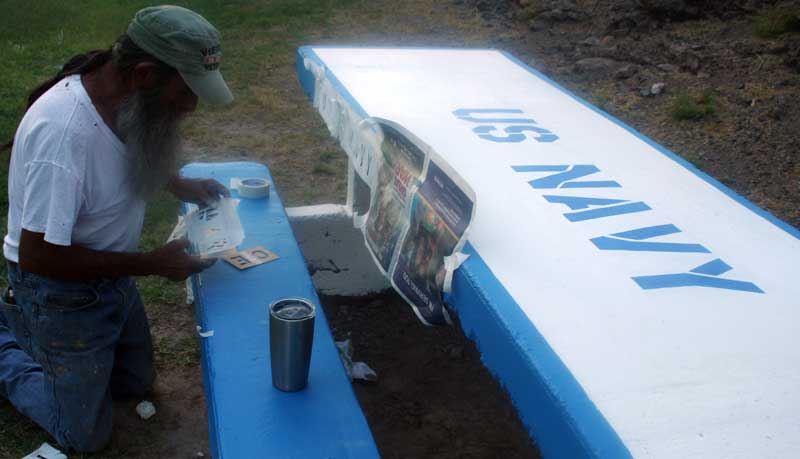 Each tabletop is painted white and has the name of a particular branch of the service. Each service name is painted in stencil, such as that used in the armed forces to designate the name of equipment or personal military-issued property. An example is a service member’s duffel bag (called sea bag in the Navy) is stenciled with his or her name and serial number. 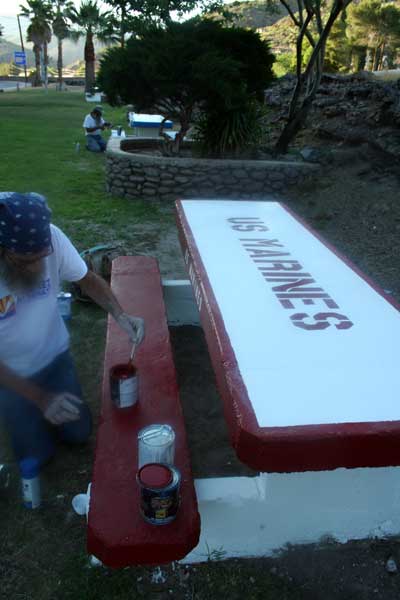 The Marines bench is painted red with red trim along the table’s edges, the Army tabletop is painted in green with green trim, the Air Force table top is done in light blue and the Navy table is done in a darker blue.

“It’s a beautiful park,” said one veteran who lives in Clifton. “I’m glad to see the town working so well with veterans. The one thing the park still needs is adequate shade, like in having a couple of ramadas for people to be out of the sun. That’s really the only drawback I see with the park, but I figure it won’t be long before there are ramadas, like through a team effort by the town and local veterans. What’s been done so far at the park to make it look a lot better by the town and veterans is really encouraging.”

The Mares Bluff Veterans Memorial was made an official town landmark last year by the Clifton Town Council. The trailhead to the memorial is located in Ward’s Canyon.