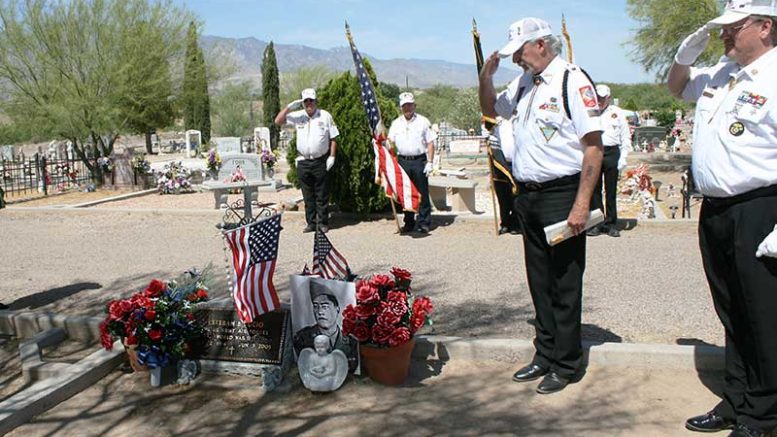 SAFFORD – It was a sleepy Memorial Day morning atop the hill at the Safford Cemetery where family and those in arms gathered to honor a loved one.

Surrounded by family, Esteban “Steve” Lucio’s gravesite was adorned with the flags as the Gila Valley Honor Guard read their remarks, a prayer and a history of his life. The Honor Guard presented the flag and then performed Taps and a nine-gun salute.

One of 14 siblings, Esteban was born in Metcalf, Arizona on Sept. 2, 1914. He attended Morenci public school and was ordered to report for his induction to the Air Force in November 1942. Alongside Esteban, his younger brother Juan entered the Navy and his nephew Gregorio joined the Marine Corps. While Juan and Esteban returned from the war, Gregorio was killed in action at Iwo Jima. 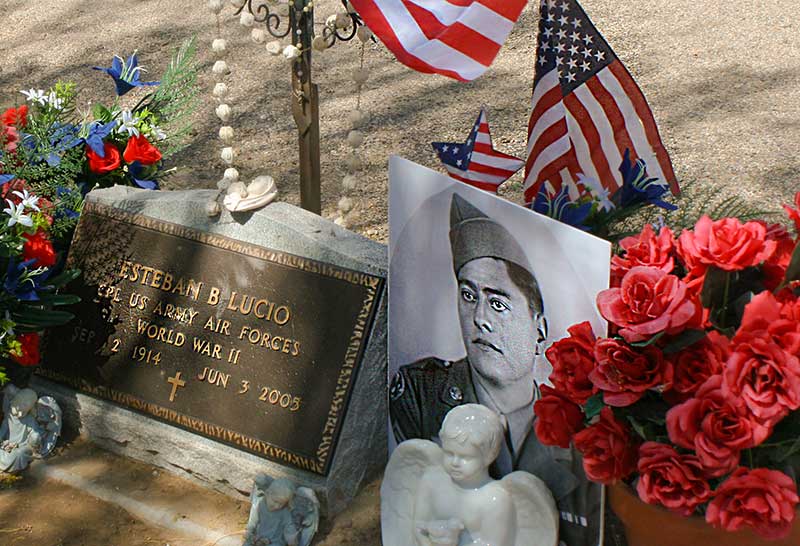 During his time in the Air Force, Esteban served in China and was one of the individuals in charge operating the radio connection and sirens in case of an air attack. Esteban was also one of the individuals who worked to create landing strips for the famed Flying Tigers, also known as the First American Volunteer Group. Esteban left China in September 1944 and was honorably discharged in January 1946.  Esteban was awarded the Good Conduct Medal and the Victory Medal. 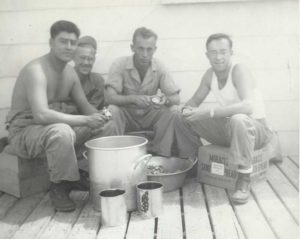 Contributed photo/Courtesy of Lupe Dominguez: Esteban “Steve” Lucio, on the far left, chops potatoes during his time in service.

Throughout the war, Esteban and his younger brother Juan kept in contact through letters. Juan is now 91-years-old and attended the service. Juan told Gila Valley Central that throughout the entire war, he couldn’t figure out why his older brother was stationed in China. Interestingly enough, Juan would later learn that Esteban was working at a crucial rendezvous point. American forces relied on the landing strips in China to refuel their planes and then return to their stationed outposts. Without the critical radio contact and landing fields in China, the airmen would crash in unknown territory.

“We corresponded all the time,” Juan said. “The guys would ask, ‘What is he doing in China?’ I finally figured out, when they flew over to Japan, they couldn’t get back, so they had the airfields and communication to get the pilots back on the field or they would crash trying to find them. That was the way it was in the Air Force.” 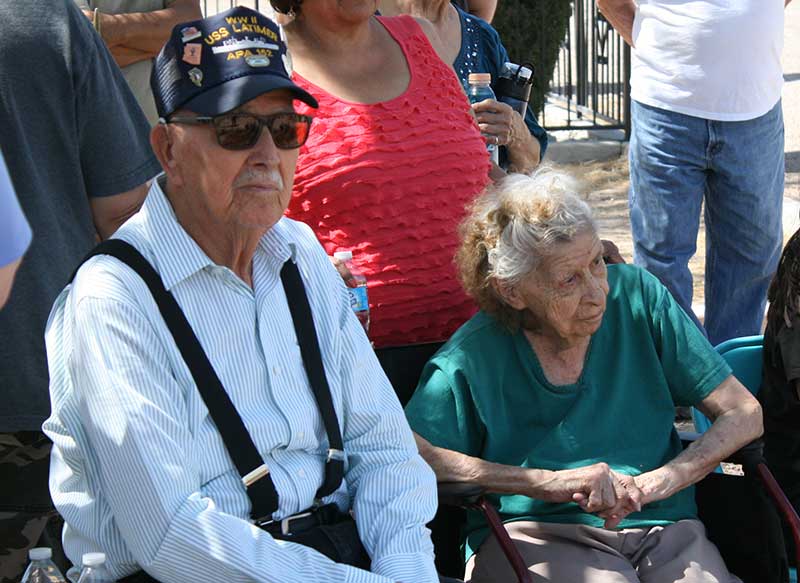 Brooke Curley Photo/Gila Valley Central: Juan B. Lucio sits beside his elder sister, Candelaria Molina, during the ceremony at the Safford Cemetery honoring his deceased brother, Esteban, on Memorial Day.

When asked what he thought of the morning’s gathering, Juan said he didn’t know about it until the night before. He was greatly appreciative and said he would never miss this honor for his elder brother. Visiting the Gila Valley from Tucson, Juan said that although he had only intended to visit for a day, he stayed for a week.

Later on in the conversation, Juan said that during his time in the Navy he was “farmed out” to the Army, and the fleet he was stationed in, named the Seventh Fleet, took the Army wherever it needed to go. One of the routes his ship took was from Guam to Pearl Harbor, transporting the wounded to a medical base. However, Juan still remembers the burial of the men who didn’t make the journey and were buried at sea. Whenever he hears Taps being played, the memory returns to him, and he is instantly brought back in time to somewhere between Guam and Hawaii on the Pacific Ocean.

“You always remember the ones you bury at sea,” Juan said. “They go through the whole ceremony and when it was through, we dropped them in the ocean. Every time they play Taps, that comes right back, that image.”

After the ceremony, the Gila Valley Honor Guard was thanked by Esteban’s daughter. Before leaving, the Lucio family took photos and visited, celebrating the lives of their heroes.

Memorial Day service to be held at Clifton Veterans Park