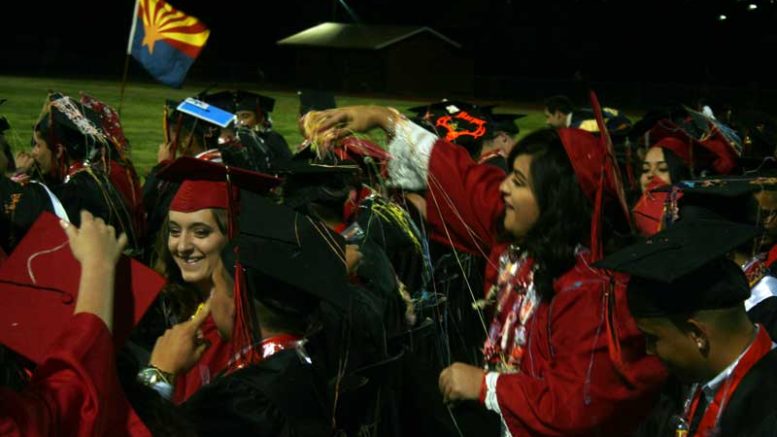 MORENCI – Some folks may have gone home with slightly sore hands. That would be due to the constant thunderous applause for members of the Morenci High School Class of 2017 at commencement exercises, Friday, May 26. Indeed, the cheering and applause will be something to remember for the 79 Wildcats who received their diplomas at Stanton Stadium. 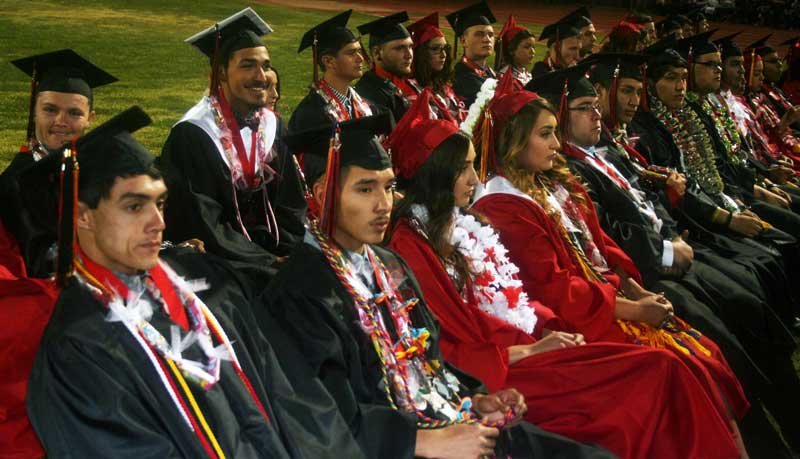 Photo By Gualterio Casias: Members of the Morenci High School Class of 2017 listen intently to speakers during commencement exercises, Friday, May 26, at Lawson Stadium.

The bleachers were packed. All of the many chairs inside the stadium fence were filled. Many, many more crowded along the fence’s exterior and in front of the bleachers. One might have thought it was a state football playoff game and the Wildcats had continuously scored touchdowns. 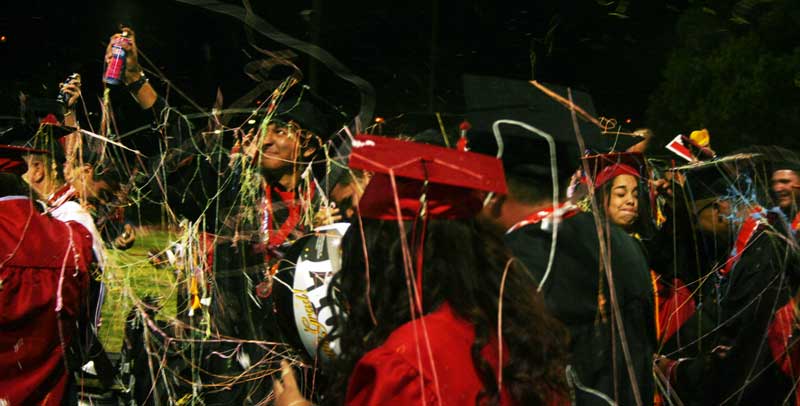 Photo By Gualterio Casias: Morenci High School 2017 graduates cut loose with several cans of Silly String after receiving their diplomas. Fortunately, the silly stuff did not stick to graduates’ caps and gowns, but some did end up wearing it in their hair.

MHS alumnus Casey Woodall was the night’s keynote speaker. He was chosen to do so by the senior class because of the example he has set in his personal life and his many professional and academic accomplishments. Woodall was a state champion wrestler as well as earning high academic marks in his days at Morenci. He went on to Adams State College in Alamosa, Colo., where he not only excelled in academics but also earned All-American honors for his efforts on the Adams State wrestling team. He currently teaches at Morenci and has coached state champion wrestling teams and several individual state champions.

Woodall received a rousing round of applause and cheers, particularly from seniors, before and after his address. He emphasized diligence, as in “never give up” in striving to achieve personal goals. A man standing in the crowd by the stadium’s fence loudly proclaimed, “He’s one of us. He’s one of us. God bless him.” Those standing within hearing distance nodded their heads in agreement. 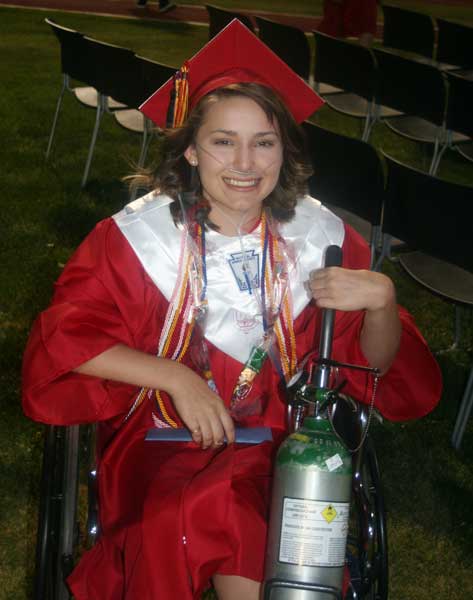 Photo By Gualterio Casias: Alyssa Garcia pauses after receiving her diploma. Garcia was recently stricken with an illness involving her heart.

Prior to the keynote speech, seniors entered the stadium single file and strode on the track in front of the bleachers enroute to taking their seats on the field. The graduates-to-be received strong rounds of applause and some were greeted with exceptionally loud acknowledgement. Senior Alyssa Breann Garcia received a particularly strong tribute. She arrived in a wheelchair, propelled by Lisa Castillo, and carried an oxygen tank. Garcia was recently stricken with a heart ailment.

Her grandfather, John Basteen Sr., was visibly moved. His eyes glistened as he watched his granddaughter being wheeled onto the track and then seated among her classmates. He wore a big smile as Garcia was wheeled up a ramp to the stage and received her diploma from Morenci School Board President Ron Campbell.

It was noted that some seniors had already received college credits via programs from Eastern Arizona College. At least a few have already earned A.A. degrees from EAC.

The reaction to receiving their diplomas was mixed among graduates. All were smiling and most quietly returned to their seats after receiving the first key to their future. Some were outright exuberant, such as one senior who, after receiving his diploma, did a celebratory dance on the track. His antics drove the crowd wild. 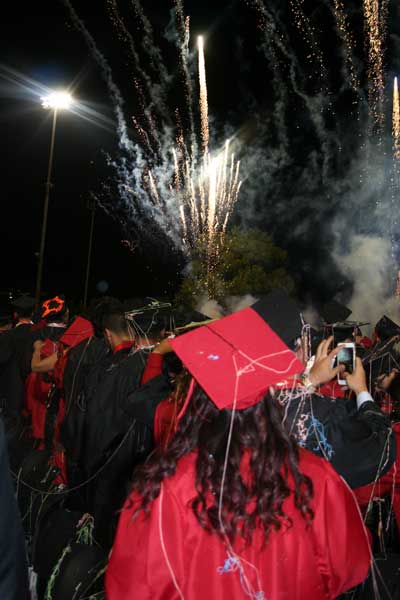 When all had received their diplomas, returned to their seats and the commencement exercise came to an end, several seniors began unleashing on their classmates Silly String from canisters. The laughter and expression of joy among the graduates was almost deafening to those standing nearby.  The Silly String, which fortunately did not stick to caps or gowns, was followed by fireworks booming and brightening the night sky. The Morenci Fire Association provided the pyrotechnics.

Following the fireworks, the crowd of families and friends poured on to the field where hugs, kisses and handshakes were given to the graduates. The crowd was so large it almost covered the entire football field from end zone to end zone.

One graduate, who was squeezed in between immediate family and relatives, laughed as he exclaimed,  “Wow, what a night!”