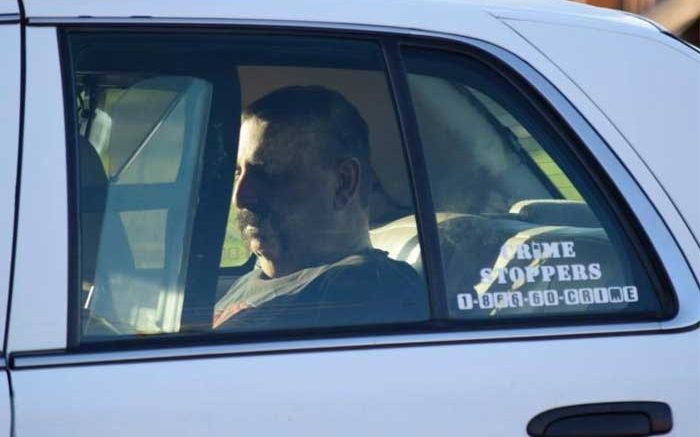 Contributed Photo/Courtesy Jeff Farrow/Modesto Bee: Phillip Turley, one of the prime suspects in the cold case murder of Mary Anne Holmes, sits in a police car after being arrested for attempted murder in California after allegedly stabbing two people Nov. 21, 2016. He remains in jail on a $2 million bond while being tried for two counts of attempted murder.

MODESTO CALIF. – A prime suspect in the cold case murder of Mary Anne Holmes in Thatcher was arrested Wednesday morning and charged with two counts of attempted murder in the stabbing of two people in a mobile home park.

According to an article in the Modesto Bee, Phillip Turley, 53, was booked into the Stanislaus County jail after he allegedly stabbed a 54-year-old woman and a 56-year-old man at the Country Western Mobile Park. 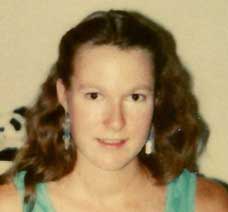 Thatcher Police Chief Shaffen Woods released a press release Wednesday night and said that while Turley remains a “person of interest” in the Holmes murder, he has not been charged with any crimes connected to the case.

Turley was one of three suspects featured on the TNT television show “Cold Justice” when it examined the July 9, 1995 murder of Mary Anne Holmes, 29, of Thatcher. Holmes was brutally murdered and sexually assaulted in her home with her 4-year-old and 18-month-old daughters present. Authorities located Holmes’ body the next day after her 4-year-old daughter ran across the street to her neighbor’s house naked and with her hands bound. Once there, the young girl told her neighbor her mother was dead. Later, the girl would draw a grisly picture of the scene with what appeared to be a hatchet stuck in the side of her mother’s head.

Police evidence drawing made by Mary Anne Holmes’ 4-year-old daughter after the murder.

Investigators informed the show that Holmes had been tortured and sexually victimized for hours in front of her children before ultimately being killed by blunt-force trauma. She was found handcuffed in the fetal position.

Her 4-year-old daughter was also bound with rope and had her underclothing cut off from her.

Woods contacted the show in 2013 in hopes it could assist with the investigation because of the cost of new DNA tests and the man power necessary to continue to investigate the crime. At the time, Woods said Thatcher Police and investigators with the Arizona Department of Public Safety had spent hundreds of thousands of man power hours working the case.

“The person who committed this crime wasn’t just a murderer, he was evil,” former Texas prosecutor Kelly Siegler said on the show. “This is the kind of freak that we would like to get off the streets more than anybody.”

According to an article in the Modesto Bee, a neighbor said the male victim was stabbed in retaliation for informing others about Turley being featured in the “Cold Justice” episode.

Attorney Murray Newman, a consultant for “Cold Justice” wrote a blog regarding Turley.

“His fascination with Mary Anne was well documented in his own words, as he kept a very detailed journal on his feelings for her. Women that Turley had dated told investigators disturbing details of his “fantasy life” that seemed consistent with details of the crime scene . . .”

“Unlike many other suspects that the police interview, Turley was extremely intelligent and to make matters more difficult, he had advanced information that he was about to be interviewed by the investigators. … Despite initially seeming agitated about being interviewed, Turley was ultimately cooperative and answered every question that the two investigators had for him. He had rational and reasoned answers for almost everything, but at times seemed as if he were taunting the investigators. At the end of the interview, Phillip Turley had done nothing to further implicate himself in the murder of Mary Anne Holmes.”

The entire blog can be read here http://coldjusticetv.tumblr.com/post/82090732081/cold-justice-insider-blog-episode-6-small-town.

Woods said his department will continue to work the murder the best it can.

“We have never stopped working on this case and will continue to exhaust all leads and possibilities available to us, until it is either resolved or we have no further leads,” Woods wrote. “We understand the desire from the public to bring the Holmes case to a close and to bring the suspect to justice. I can assure you that we are just as anxious as any- one. However, it is important to keep in mind the rights of all people and respect the due process afforded to us as Americans. It is often difficult to balance the need to be transparent and still protect the integrity of the investigation. We will do our best to accomplish both. However at this time, we do not have any further information to release regarding these cases.

We would like to extend our thoughts and prayers to the victims, families, friends and anyone else who have been affected by these tragic crimes.”

Police are still seeking Justice for Mary Anne Holmes’ daughters, who had to grow up without their mother.