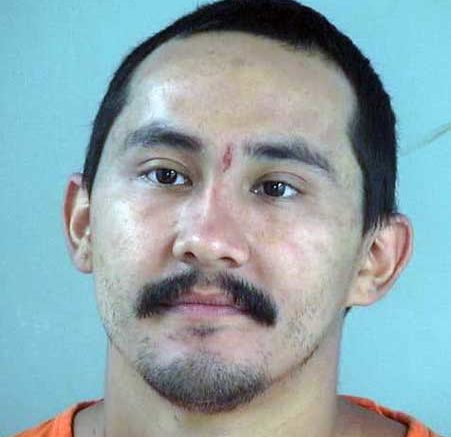 Contributed Photo/Courtesy GCSO: Nicholas Arevalo, 26, was trespassed from Circle K and given a citation for possession of drug paraphernalia after allegedly smoking heroin in the store's restroom.

SAFFORD – The heroin epidemic hits all facets of life in the Gila Valley, even for those who simply shop at a convenience store.

Nicholas Arevalo, 26, of Safford, was given a citation for possession of drug paraphernalia and was transported to Mt. Graham Regional Medical Center for evaluation Sept. 8 after being located under the influence of heroin in the restroom of the Circle K at 1324 S. 1st Ave.

According to a Safford Police report, officers were dispatched to the store at about 12:30 a.m. after a clerk advised Arevalo had been in the restroom for more than 15 minutes and was making unusual noises. The clerk was concerned Arevalo either needed medical attention or was using drugs.

Upon arrival, an officer noted hearing slapping and grunting noises coming from the restroom. The officer knocked on the door and Arevalo allegedly responded that he would be out in a minute. The officer then announced who he was and Arevalo began flushing the toilet several times.

Since Arevalo still refused to open the door and fearing he might be flushing evidence, the officer forced the door open and located the suspect standing “with a very disoriented look on his face.”

At the hospital, Arevalo said he couldn’t even remember being at the Circle K. While he was being interviewed, he proceeded to “nod” out frequently, or suddenly fall asleep as is common with heroin use.

The officer gave Arevalo a citation for the drug paraphernalia and informed him he was trespassed from Circle K. Hospital staff informed the officer that they would keep Arevalo monitored until the effects of the drug were over.