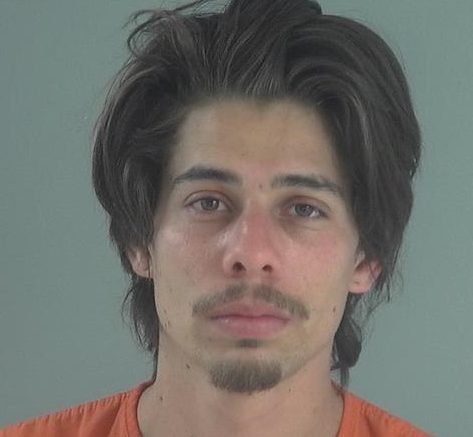 Contributed Photo/Courtesy GCSO: Alexander Coronado was booked into jail on a warrant after an officer found him in possession of heroin and needles.

SAFFORD – A bicyclist was caught with heroin and needles Sunday after an officer pulled him over for traveling against traffic on a roadway.

According to a Safford Police report, an officer on patrol witnessed Alexander Christopher Coronado, 23, bicycling southbound on a red mountain bike on Hollywood Road traveling against traffic.

The officer initiated a traffic stop on Coronado and learned he had an outstanding warrant stemming from a 2016 criminal damage case in which he failed to pay restitution.

While being placed under arrest, Coronado advised he had a needle in his pocket he used to inject heroin and that he had some heroin as well. Alexander removed the needle for the officer, and the officer located a “dark chunky substance wrapped in a piece of plastic” in Coronado’s pocket believed to be heroin.

Two more needles were also found in Coronado’s backpack. Coronado was then booked into the Graham County Jail on his warrant with charges regarding possession of a narcotic drug and possession of drug paraphernalia pending. His backpack and bicycle were placed at the Safford Police Department for safekeeping until he or a designated person could retrieve them.