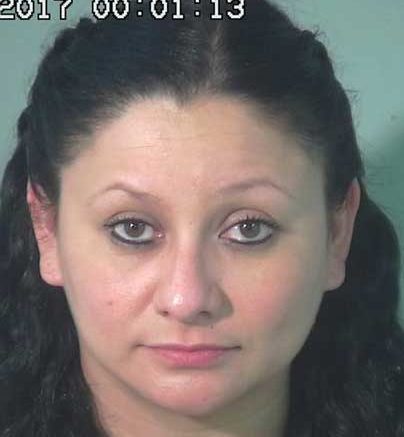 Contributed Photo/Courtesy GCSO: Michelle Hernandez, 36, was jailed for assault and other charges after the victim took a cell phone video of her actions at his residence.

SAFFORD – Authorities used to find them in a tight predicament in domestic cases where it was he said/she said with no other witnesses and little physical evidence. But with the proliferation of smart cell phones with video capability, quick-thinking individuals have begun to film crimes committed against them; giving police a better view of what occurred.

A woman was booked into the Graham County Jail on a variety of charges Friday, Sept. 8, after her ex-boyfriend took a cell phone video of her actions.

Officers were dispatched to a residence in the 1300 block of 20th Street at about 9:04 p.m. regarding a man and woman fighting. Upon arrival, the male subject informed officers that Hernandez was his ex-girlfriend and that she came to his residence to collect money from him. The victim said Hernandez was upset upon arrival and quickly became argumentative.

After escorting Hernandez outside, the victim said Hernandez began pounding on his front door and then punched a hole in his front window with her fist.

At that point, the victim opened his door and told Hernandez to leave and informed her that he was calling the police. Hernandez then allegedly tried to force herself back into the residence and scratched up the victim’s arms while he attempted to keep her outside.

During the interaction, the victim had taken his cell phone out and began to video record the proceeding. The officer viewed the video and could hear the victim telling Hernandez to leave and the sound of glass breaking followed by Hernandez asking the victim, “Do you want to (expletive deleted) fight?”

After that, a short struggled ensued and the video ended. Blood was found on the sidewalk near the broken window, and Hernandez allegedly admitted it was hers from where she cut her hand when she hit the window.

Hernandez told the officer that the victim had called her to his house to give her money so they wouldn’t have to deal with each other anymore. However, the two began arguing about money and as she was leaving the victim told her something that angered her so she struck his window, according to Hernandez.

After interviewing both parties and viewing the cell phone video, the officer placed Hernandez under arrest and booked her into the jail. Another officer remained at the scene until Hernandez’s relative arrived and took possession of her car.