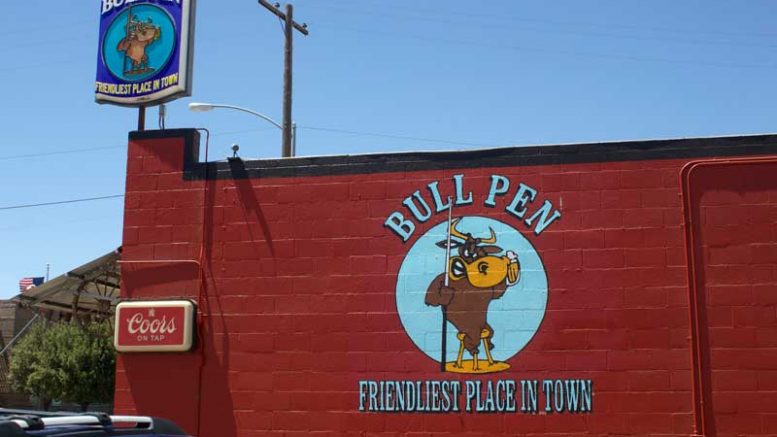 SAFFORD – The “friendliest place in town” didn’t end up that way for a trio of men who met up in the parking lot for an altercation that ended with the brandishing of a gun after tossing back a few at the Bull Pen bar Wednesday night.

Officers were dispatched to the bar at 912 W. Thatcher Blvd. at 12:18 a.m., Thursday, regarding a weapons offense.

Upon arrival, a man identified as Chauncey Kelley said he pulled his gun from his vehicle because he was being assaulted by two men. The men were identified as Zachary Lee and Jared Luster.

Lee told the officer he was inside the bar when someone told him his friend, Luster, was being assaulted outside. He said he came out and saw Kelley beating on Luster, so he began to punch Kelley in the head. He said Kelley then pulled a pistol from behind his back and pointed it at him and Luster. He advised he wished to pursue charges against Kelley.

Luster told the officer that Kelley was harassing a mentally handicapped person inside the bar and that Kelley was “coming at him” when Lee started to strike Kelley. He said Kelley then pulled out a gun and pointed it at himself and Lee.

However, unfortunately for Lee and Luster, several other witnesses came forward and one of them had recorded the incident on a cell phone. The cell phone video showed Luster and Kelley were just talking when Lee came up from behind Kelley and began to punch Kelley in the head. At that point, Kelley pulled out his handgun, a Smith & Wesson .40 Shield, and pointed it at Lee and Luster. Kelley told an officer that he was just defending himself and didn’t want to press charges.

After informing Lee of the video and how it disproves his version of events, Lee also decided against pursuing charges. The three men were informed they were no longer welcomed back at the bar and were asked to leave. Due to Kelley being intoxicated, his gun was taken by the officer for safekeeping until Kelley could come to the Safford Police Department during business hours to retrieve it.