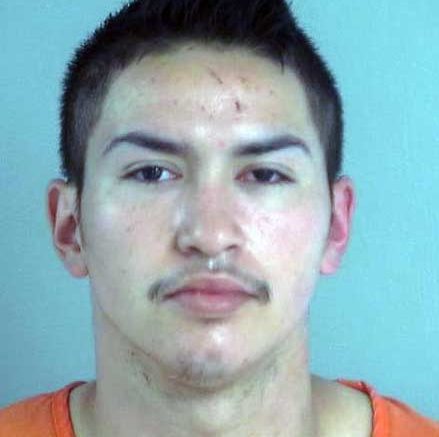 SAFFORD – A woman screams for help as a man chokes her in a rage, biting her and hitting her. She escapes from being locked inside a bedroom door to the assistance of a neighbor, who calls the police.

That was the scenario that occurred at a residence in the 500 block of 1st Avenue on May 10.

According to a Safford Police report, the victim said she was taking a nap while her live-in boyfriend, Antonio Palomino, 23, watched over their baby. The woman awoke to the baby crying, however, and confronted Palomino about using drugs and not attending to their baby. Palomino would later allegedly admit to a Safford Police officer as being a methamphetamine user.

Palomino became angry at the accusation, according to the victim, and an argument ensued that soon escalated to physical violence. She said Palomino struck her several times, bit her arm as she put them up in a defensive posture, choked her, pulled her by her hair and locked her in a bedroom and continued to strike her in her face as she yelled for help. Police received multiple calls regarding a woman calling for help.

The victim managed to escape and ran to a neighbor’s house, where she found sanctuary until police arrived. An officer noted she appeared to have a bite mark on her arm and a injuries to her forehead and cheek as well as a cut lip, but no choke marks were visible.

Palomino informed the officer that the issue was just a small dust up over the victim sleeping and him having to watch their infant son. He said he bit the victim to get her off him, and the officer noted he had a small scratch on his forehead.

Palomino was then placed under arrest for assault/domestic violence and was booked into the Graham County Jail, where he allegedly admitted to using meth two days before the argument.