PIMA – In the Gila Valley swim team league, points aren’t kept in regular meets, so it’s hard to tell which team came out on top. What is easy to see from the smiles from everyone involved, including the swimmers, coaches, volunteers and lifeguards working the event, is that everyone was indeed a winner.

Yes, ribbons are given for each place in each heat and the competition for bragging rights can be fierce, but even the swimmer who finishes dead last in their event will have the biggest smile knowing that they accomplished a goal and had fun doing it. That smile gets even bigger when they surpass their previous time (some as much as 20 seconds faster).

The Pima Flippers hosted the Safford Sharks at Pima Pool on Friday, in the second of three local meets before finals, where only ribbons turn into medals. Only the top racers compete in finals, and the times swimmers clock in the three meets prior creates the list of who will swim and in what seeding. 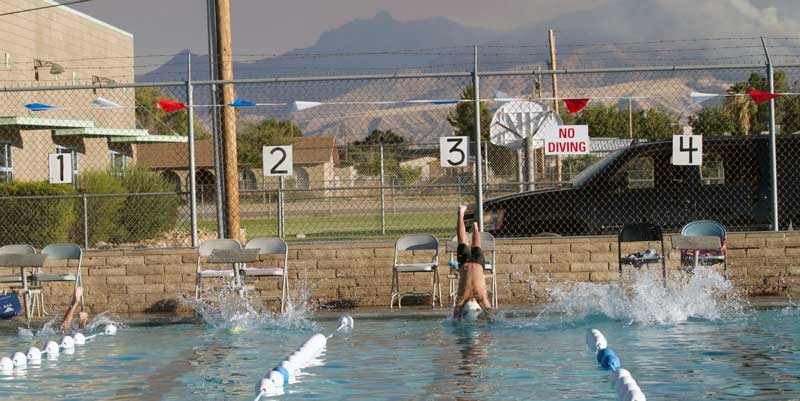 Jon Johnson Photo/Gila Valley Central: Swimmers are still working on their dives in just the second meet of the short swim season.

Under the ominous background of Mount Graham aflame, the two teams met in the water and cordially took each other to task.

“It’s great to see Pima and Safford come together as a community like this,” Safford head coach  Jordan Keith said.

The meet was the second in the season for both teams, and both coaches commented on the improvements in the swimmers.

“I’m seeing a lot more head down, swimming into the wall (and) finishing races strong,” Keith said. “The kids are putting the technique that they’re learning in practice into the races.”

The racer of the meet had to be 12-year-old Jack Hackett, who competed in each available event and took first place in every single one.

“I love this,” Hackett said. “It’s super fun. It’s a way to get into shape for cross country and track.”

Schlittenhardt singled out a comeback victory by Ambrosia Johnson in the girls 11-12 individual medley as her astounding moment of the meet.

“Rose is awesome,” Schlittenhardt said. “She was a beast in the IM tonight.

Pima will travel to Thatcher and Safford will square off against Morenci on Friday for the final regular-season meet before the teams finish the season the following week at finals in Safford.

“Friendships are being made,” Keith said. “I’m seeing a lot of camaraderie – cheering each other on. The first meet they were all kind of strangers.”

Swimmers end season with a splash at finals