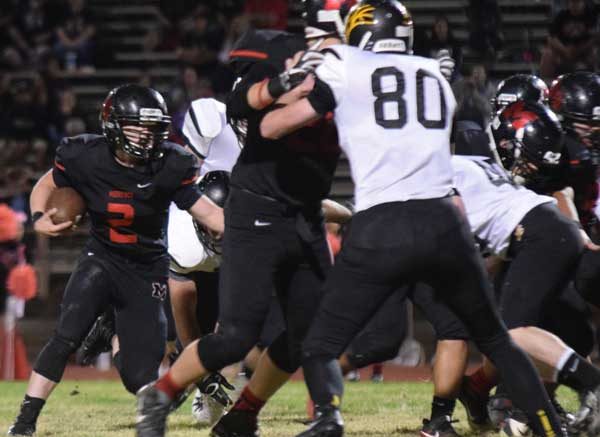 Raymundo Frasquillo Photo: Morenci Wildcats senior running back Kyle Sarrett (2) looks for an opening against the Round Valley Elks on Oct. 7. Morenci succumbed 49-14 to Round Valley, which has won five of the last six match ups.

Morenci entered the Oct. 7 home contest with Round Valley in the number 11 slot, clearly among the possible top 16 which qualify for state playoffs.

Morenci got within a possession with 6:47 left in the first half, covering 75 yards in 12 plays using 4:33. Quarterback Kyle Swan (10-17-118-0, 2 TDs) connected with receiver Easi Vanegas (7-94, TD) for a 21-yard score to cap the Wildcats’ third offensive possession. Vanegas added the conversion kick to trail by seven points.

Elks running back Bryson Brown (12-253, 2 TDs) darted 80 yards for a touchdown with Sergio Comunez adding his third of seven conversion kicks, while quarterback Kyron Woolf (5-10-107-0) connected with Rhett Bingham (1-16) for a 16-yard TD plus extra point kick, and tossed a 34-yard TD to Dylan Workman (1-34). The extra point kick was good and there was little Morenci could do with just 22 seconds left in the half.

Round Valley opened the scoring on a 1-yard Marshall Donaldson (2-11, 2 TDs) run with 3:21 left in the first quarter, using 3:08 to cover 51 yards in seven plays, and Brown ran 11 yards with 35 seconds elapsed in the second quarter, using 1:26 to cover 73 yards in five plays, before Morenci found the end zone after punting on its initial two possessions.

Morenci deferred to the second half and went 50 yards in eight plays, but failed to get a first down on 4th-and-9 to turn over possession.

Morenci added its second TD on a Swan to Chris Beck 16-yard aerial for the final score.

The Wildcats drew 76 yards on nine penalties, lost 2-2 fumbles and had to punt five times. Meanwhile, Round Valley was flagged for 55 yards on five infractions, had no fumbles and punted twice with reserves.

Aguinaga recorded a quarterback sack for a 7-yard loss and Brayden McCarthy an interception.

Morenci will next host the 13th-ranked Tombstone Yellow Jackets (4-3 overall, 1-2 2A South) at Lawson Stadium on Friday, Oct 14 to conclude the Wildcats’ home games.

“You will need to put on your big boy pants,” Morenci head football coach Gary Sandoval said. “We are not out of the playoffs. We need to win our next game.”

“There are little things we need to fix,” Sandoval said in preparation for the Tombstone game.

The Wildcats also need to learn a life lesson; one can only do what you can with what you have.

Duncan senior Chris Corona made a pivotal play on the night as he returned a kickoff 75 yards to break up a 20-20 tie with 1:47 left in the first half.

The win gave Duncan a 10-4 record in homecoming games in its 8-man era.

Duncan will travel to Phoenix to play NFL Yet Academy for its final regular season game while Fort Thomas will be away in Anthem to play Anthem Prep for its final game of the season. 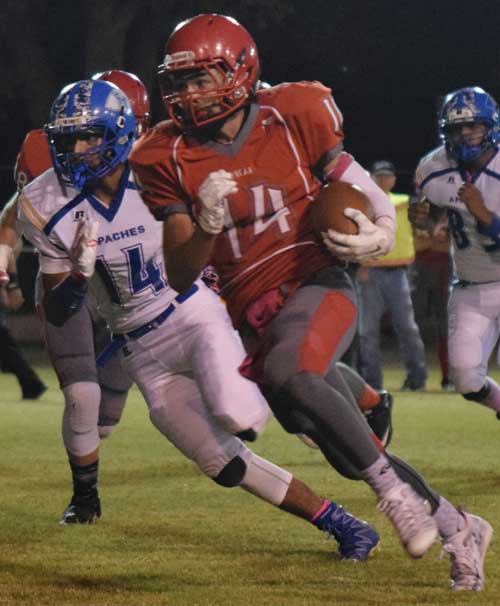