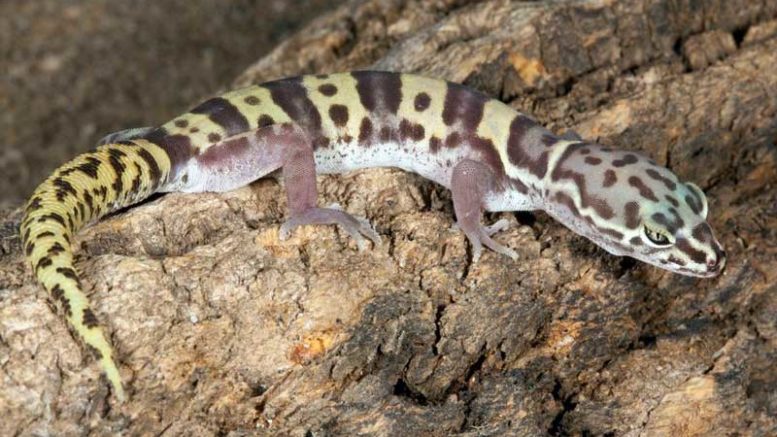 Photo By Young Cage. A western banded gecko sits on a rock.

I’ll admit, I’m not an expert on reptiles – specifically the lizard type.

So, when I encountered a small Gila Monster looking dude hanging around the area to my storage room entrance, I naturally assumed he/she was a baby Gila Monster, especially, since I’d recently composed a Gila Valley Central story on a large Gila Monster I stumbled across in a local cotton field (“Monster In The Cotton Patch,” Oct. 17, 2017).

Convinced the animal was an infant Gila Monster, probably hatched this spring or summer, I didn’t give it much thought if it might not actually be a descendant of the orange and black beaded lizard. It’s markings and physical characteristics were similar, but not exactly the same.

Considering Gila Monster encounters are only slightly less common than rain around here, I forgot about the incident until my daughter was rummaging through the storage facility when, suddenly, the little creature again appeared.

Not being particularly evasive, the reptile wasn’t apprehensive of her appearance and nonchalantly went about his business of doing whatever it is lizards do. However, upon reviewing a picture she sent me of the little guy, I did notice his physical looks hadn’t changed, leading me to believe this wasn’t a young Gila Monster at all, but another variety.

A day or two later my daughter texted a brief message informing me her husband had discovered the miniature lizard could be something called a western banded gecko.

Retreating to the trusty laptop, I googled “western banded gecko” and immediately multiple images of the reptile appeared. Sure enough, the invader of my storage locker was, indeed, the described animal and not a young Gila Monster.

Then, of course, the inevitable question arose; what is the difference between a lizard and a gecko? To me, and I suppose to most people, “lizards” are the generally accepted term used when describing the small, scaly four-legged creatures with a long slender tail. 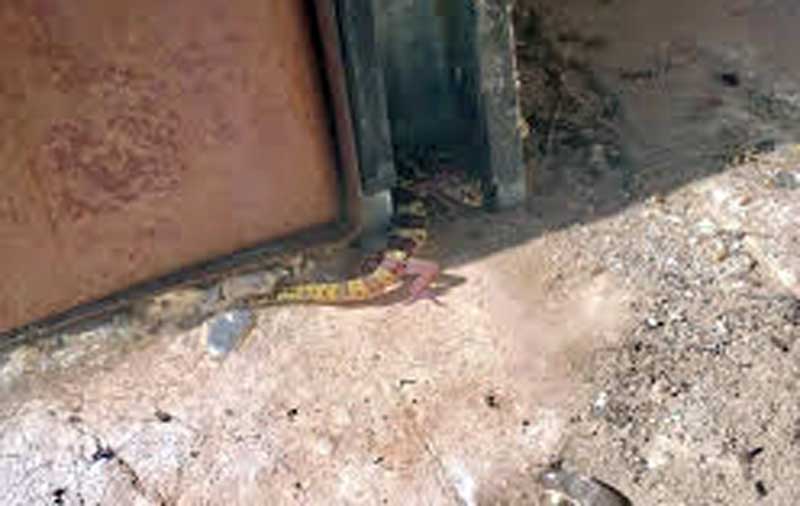 Photo By Mike Bibb: This western banded gecko has apparently taken up residence.

Back to the computer – “what is the difference between a lizard and a gecko?”

According to the official description “lizards are reptiles of the order Squamata, normally possessing four legs, external ear openings, and movable eyelids. Geckos are small to average sized lizards belonging to the family Gekkonidae which are found in warm climates throughout the world. Geckos differ from other lizards in terms of their living conditions, physical characteristics and their eating habits.”

Humm. Geckos are also lizards? Doesn’t seem like much of a difference. More research.

Under the heading “Physical Characteristics,” additional explanations are given:

• Both the animals are four-legged and cold-blooded.  Both have certain species that can change colors.

• While most Lizards have dry and scaly skin, the gecko’s skin is thin with small bumps on it.

• Lizards possess external ears and movable eyelids while geckoes have no eyelids but have a transparent membrane which they lick clean. Night hunting geckos have large pupils.

• While some species of geckos may expel a foul-smelling material and feces on their aggressors in defense, lizards aren’t known to do that.

• Some species of geckos have specialized toe pads that enable them to climb vertical surfaces while Lizards aren’t known to have them.

• Most geckos have broad toes covered with flaps of skin containing thousands of bristles and lizards have clawed feet.

• Most geckos can shed their tails and a new one can grow in its place. Lizards are also known to have a fragile, detachable tail.

• The common gecko originated in North Africa and was carried unknowingly by humans to southern France, the Canary Islands, and even islands in the South Pacific. Lizards evolved over 200 million years ago when reptiles first evolved.

• While the average lizard lives about 1-3 years, some varieties have been known to survive several decades. Geckos, on the other hand, live from 5-7 years on average.

• The gecko “Sphaerodactylus parthenopion” is only one-and-a-half inches long.  It is the world’s smallest reptile.

There are other separate distinctions but you get the idea. Geckos and lizards are similar but different.

Perhaps one of the most notable differences is that while lizards have been around Arizona for millions of years, the little gecko visitor in my storage shed somehow found his way from Africa to Safford. Or, at least his great-grandparents did.