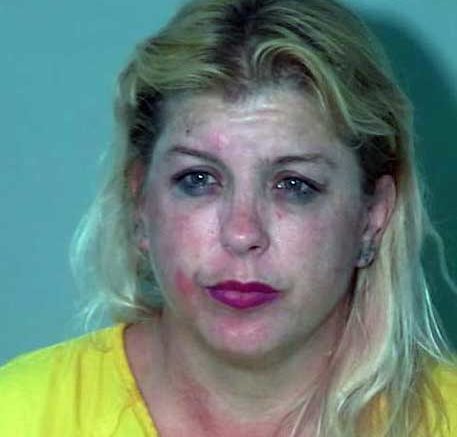 SAFFORD – A man who was living with his ex-wife despite having an order of protection against her found out that some stripes seem not to change.

A man called authorities at about 3 p.m. on Oct. 24 regarding his ex-wife and son being on methamphetamine and acting aggressively toward him. The man said the pair were angry at him for looking at some papers that had been left on a table.

The victim reported that he had walked out of the residence after his ex-wife, Michelle Suzzette Wakefield, 43, threw a crowbar at him.

The victim then called the police, but by the time they arrived Wakefield and her son had departed.

Roughly 45 minutes later, officers were again dispatched to the victim’s residence on S. 7th Avenue in Safford and located Wakefield crying and yelling as she walked down the street. Wakefield was then taken into custody.

The victim said Wakefield returned to the residence and was angry about him calling the police on her. He said Wakefield broke a wooden window cover and then pushed and scratched him as he attempted to leave the residence. With the sounds of sirens in the distance, Wakefield then made her way out of the house and down the street, according to the victim.

The victim also informed the officer about a protection order he has against Wakefield that was issued in July. Wakefield is also already on probation for separate charges of possession of drug paraphernalia and shoplifting. She got the drug paraphernalia charge after Safford Police searched the same residence in August and arrested four people with drug-related warrants who were hiding on the property. That article can be viewed here.

Wakefield was then arrested and booked into the Graham County Jail on charges of assault, disorderly conduct, and criminal damage.