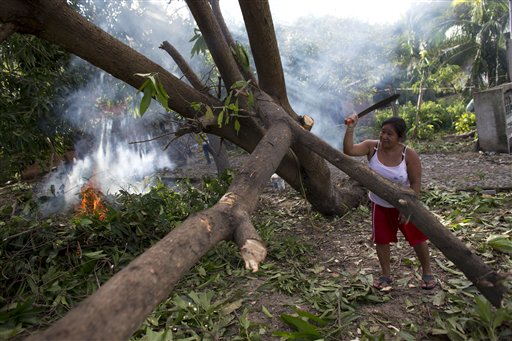 A woman works to chop firewood from a toppled mango tree, as other family members burn brush and debris, two days after the passage of Hurricane Patricia, in Chavarin, Colima state, Mexico, Sunday, Oct. 25, 2015. Patricia roared ashore in Mexico on Friday as a Category 5 terror that barreled toward land with winds up to 200 mph (320 kph). But the arrival of the most powerful hurricane on record in the Western Hemisphere caused remarkably little destruction. (AP Photo/Rebecca Blackwell)

EL REBALSE, Mexico (AP) — The town square in El Rebalse is now an island amid Hurricane Patricia’sfloodwaters, a place for Maria Santana Vazquez and her husband to rest Sunday after wading through water, at times chest deep, trying to return home.

All around, kids swam, a dog paddled and just before noon two high-clearance army transport trucks arrived — the first outside help since Patricia, the hemisphere’s strongest hurricane on record, roared in Friday night and washed out the only paved road into town.

While Mexico for the most part was relieved that the storm caused no fatalities and only marginal damage in the resort of Puerto Vallarta and the principle port of Manzanillo, the sparsely populated zone of Pacific coast where Patricia delivered its fury was only beginning to assess the full damage Sunday.

President Enrique Pena Nieto said Saturday that 3,000 to 3,500 homes were damaged and about 8,650 acres of farmland were hurt. But that was before anyone from the government arrived in El Rebalse, a town surrounded by banana plantations that Associated Press journalists tried to reach on foot before hitching a ride on the army trucks.

Banana trees as far as the eye could see were snapped in half, and large bunches of the fruit moldered in the intense sun.

“They’re going to lose a whole year,” Santana’s husband, Artemio Sanmeron Sanchez, said of the plantations where everyone in town made their living.

Then the couple slipped back into the water and waded off. Already they had slogged from the neighboring town, Cihuatlan, where they evacuated. They assumed their home of 15 years was destroyed.

In the surrounding Cihuatlan Valley, less than 6 miles (10 kilometers) from the Pacific, between 1,800 and 2,000 people depend directly on agriculture for livelihoods, said Narciso de Jesus Ramirez Rubio, a banana grower and president of the municipal small landowners association. That’s not counting their families.

He was annoyed that, in his mind, Pena Nieto had played down the damage. He said that only with government help could the owners of the mango and banana plantations hope to get their fields producing again in a year’s time. Work to build levees to contain the nearby Marabasco River began three years ago, but were not completed, he said.

“This is total destruction,” Ramirez said as he watched soldiers work to make a washed out section of road passable. “Agriculture along with tourism is the principle source of employment.”

The Mexican navy put out a statement Sunday that it had 5,791 sailors and marines, 192 vehicles, seven aircraft, three vessels and eight mobile kitchens working to reach those affected by the mega-storm.

Patricia made landfall as a powerful Category 5 hurricane, having peaked at sea with winds up to 200 mph then coming ashore Friday evening with winds of 165 mph.

After the wind and rain subsided, the river entered through a gap behind the banana plantation where Martha Gutierrez and her husband had lived and worked for nine years. It was 1:20 a.m. and the family scrambled to another house with a second story. They hadn’t evacuated before the storm because they wanted to care for their animals. In the end, five of their six pigs drowned, and their house was destroyed.

“We have nothing to eat,” Gutierrez said.

In El Rebalse, Rosalinda Hernandez Murga stirred a pot of rice soup over a wood fire.

Her family and three others took shelter in a well-constructed, two-story house before Patricia struck. Its sloped driveway to an elevated parking area is now a landing area for boats.

All 16 people staying there crowded into a room on the second floor when the storm hit. The fiercest winds lasted about two hours, but strong winds blew for five or six hours shaking the house.

“It felt like it was going to lift off,” Hernandez said.

Around 1 a.m. the water began rising around them. By Sunday it had gone down somewhat, but was still about chest high in the street.

Out on the road leading to El Rebalse, mud-caked and breathing hard, Carmela Jeronimo Avalos heaved a big garbage bag of clothing off her shoulder and onto the pavement. She had just slogged about a mile (2 kilometers) into the flood zone with relatives to salvage what they could.

With the water subsiding to ankle deep, they could haul out clothes, a small television and two electric fans. After catching her breath, Jeronimo turned around and began another trek to her ruined home to see what else could be saved.