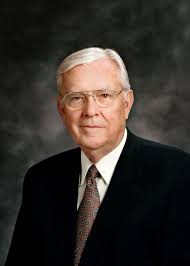 SALT LAKE CITY (AP) — A top Mormon leader is set to deliver the keynote speech Tuesday at the opening of a conservative conference that brings together supporters of the “natural family” — and has elicited strong opposition from LGBT groups.

About 3,000 attendees are expected in Salt Lake City for the four-day World Congress of Families event to hear a lineup of 185 speakers explain why they think families led by a man and woman who are married are best for society. They will also address topics such as the social costs of pornography, human trafficking and the bioethics of cloning and genetic modification.

The Human Rights Campaign, a national group that supports gay rights and same-sex marriage, lambasted the World Congress of Families as being a dangerous hate group that promotes anti-gay legislation around the world in places such as Uganda and Nigeria. Director Ty Cobb called on the Mormon Church, Utah Gov. Gary Herbert and other speakers to withdraw from the conference.

“The LDS church has made tremendous steps in being more inclusive,” Cobb said. “It’s disappointing to see the LDS church take this misstep.”

Mormon Church spokesman Dale Jones stood behind the faith’s involvement in the conference, saying in a statement: “Utah has become a destination for many world conferences which represent a wide diversity of thought and opinion and we’re pleased that Elder M. Russell Ballard has been invited as one of the keynote speakers.”

World Congress leaders scoff at the criticism, which includes being on the Southern Poverty Law Center’s list of hate groups for its anti-LGBT views. The group says that asserting their beliefs doesn’t mean they are espousing hatred toward the LGBT community.

In a statement, the organization said the Human Rights Campaign “has once again tried to name, blame, and defame those who don’t endorse its radical agenda. The HRC’s attempt to label the World Congress of Families as a ‘hate group falls so far outside the realm of reality that is discredits the organization and exposes its tactics.”

The Rockford, Illinois-based World Congress of Families is an unapologetic proponent of what it considers the key to healthy society: The “natural family” led by a married heterosexual couple, said executive director Janice Crouse in May. Crouse said the definition of marriage has been established by God.

This is the organization’s first summit in the U.S. They have held previous events in Madrid; Amsterdam; Warsaw, Poland; Mexico City; Geneva; Sydney, Australia; and Prague, Czech Republic.

Herbert and his wife are scheduled to talk briefly Tuesday evening. The Republican governor last week said Utah welcomes many conferences with different viewpoints, saying he’s not sure that all allegations against the group are true.