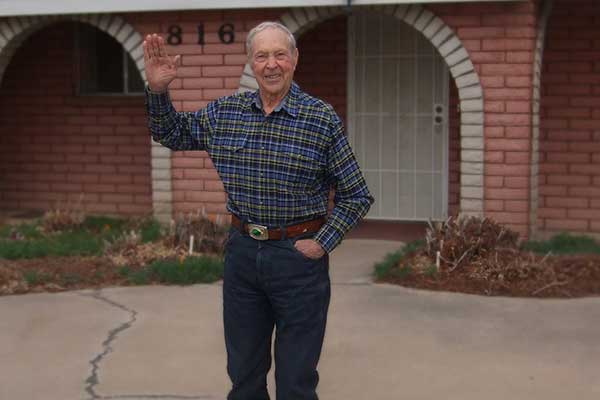 On April 28, 2018, at the monumental age of 102, Harold Major, of Safford, Arizona, completed his journey on this earth and stepped into the promised future he had lived for and long-awaited with faith and thankfulness.

Harold was born during World War I on November 10, 1915, to Leslie and Hallie Major in Motley, Minnesota. Shortly thereafter his family moved to Elwood, Nebraska, where his brother and life-long friend, Wayne, was born in 1919. His father farmed for his livelihood.  Their first mode of transportation was a wagon pulled by a team of horses. Later they were the proud owners of a Model T Ford.

In 1929, when Harold was 14, he made the decision to begin serving God; the most important decision of his life. This was his life-long commitment and greatest source of help and joy all his days. The Great Depression also began that same year and lasted until he was 24.  They endured hardship, but he often mentioned that farmers fared better than others during this period with more food and gasoline available.

In pursuit of work, Harold and Wayne moved to Riverton, Wyoming, in the spring of 1940, where Harold drove truck, hauling beans. The brothers built a grain elevator together where Harold continued to work after its completion. It was here in Riverton that he met his “wonderful girl,” Anne House.

World War II erupted and on November 11, 1942, he was drafted into the army; stationed at Fairchild near Spokane, Washington. Eleven months later, Anne traveled out there, and they were married on October 1, 1943. Harold was shipped overseas to Okinawa a few months before his first child was born. He first saw his son when he was fourteen months old, upon his military discharge in January of 1946. The family went back to Riverton for three years, but in 1949 they moved back to Washington where Harold bought a farm and began to dairy. This is where he raised his family of 5 children.

In 1972, he sold the farm and moved to Colville, Washington where he began a new career as an electrician. Five years later, Harold and Anne moved to Safford, Arizona, where Harold continued as an electrician and a handyman until he finally retired in 2005, at the age of 90.

Anne, his wife of 53 years, passed away in 1995. A year later he met and married Martha Dye of San Manuel, Arizona. They had 17 years together before her passing in 2013. One year later Harold lost his brother, Wayne.

Funeral services for Harold will be conducted Wednesday, May 2, 2018, at 10:00 a.m., at Vining Funeral Home’s “Chapel of the Valley.” Concluding services will follow in the Safford Cemetery with military honors being conferred by the Gila Valley Veterans Honor Guard.

Those wishing to make donations in Harold’s honor may do so to: the Southeast Arizona Community Unique Services (SEACUS) www.seacus.org, use the donate button on the home page or to the MGRMC Hospice at the Hospice Foundation Funds, 1600 S. 20th Ave., Safford, AZ 85546.