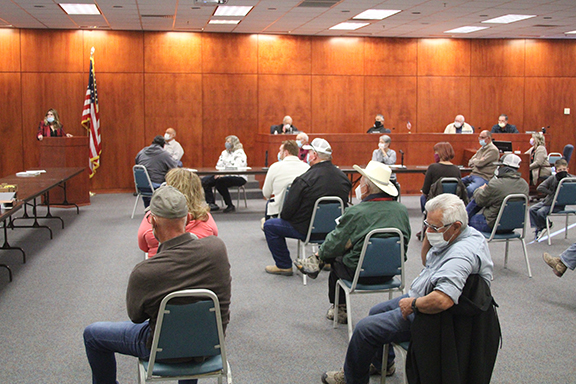 Heather Dukes, attorney for Bayacan, far left, gives a presentation to the Graham County Planning and Zoning Commission on a re-zoning proposal that would allow purchase and development of a medical canabis grow in an unused greenhouse currently owned by NatureSweet. - David Bell Photo/Gila Valley Central

SAFFORD – With plenty of comment from the public, and little from the commissioners, the Graham County Planning and Zoning Commission voted to recommend denial of a zoning change that would allow a medical cannabis grow in Bonita.

The vote was 7-1 Wednesday to recommend denial of the request by Bayacan.

The recommendation now goes to the Graham County Board of Supervisors for final action.

Heather Dukes, attorney representing Bayacan at the meeting, said she was surprised at the vote.

“Given the tours that we’ve offered, and the amount of support that we’ve received through our job fairs and our website; and then in just speaking with business owners, stake holders (and) community members; we’ve received a lot of support in the community. In large part due to the jobs and the economic impact that this operation will have in the county,” she said.

Bayacan is seeking a change from general land use (A zoning) to unlimited manufacturing land use (M-X zoning) in order to purchase and refurbish one of the NatureSweet greenhouses (known as Site 6) in Bonita into an indoor medical cannabis grow facility.

The greenhouse encompasses 53 acres; however, officials at Bayacan told Gila Valley Central that about 48 acres would be used to farm and the other five would be used for equipment and administration.

Public comment was split, with four people speaking in favor of the proposed zoning change – three at the request of Bayacan, including Skip Hewitt, NatureSweet vice president, and former Graham County manager Joe Carter – and five in opposition, all property owners near the greenhouse.

Wendy McComber, whose family raises thoroughbred horses in the area, questioned the environmental impact a medical cannabis grow would have on the area, specifically the impact on air quality. She also noted that the M-X zoning would allow for a number of non-agricultural uses, which could impact neighboring farms and ranches, as well as quality of life.

Dukes explained that the zoning does not allow the county to prohibit specific uses; however, Bayacan is willing to enter deed restrictions on the property, limiting the use to only a cannabis grow – no processing, sales or distribution.

A number of residents said the facility would create a “dead skunk” smell in the area, but officials with Bayacan said that would not occur because there would be no processing at the facility and all growing would be indoors.

Marvin Fleming said he believed the re-zoning would de-value neighboring properties in the Bonita area, and suggested it instead locate in Safford.

The re-zoning request will come before the Graham County Board of Supervisors during its regular meeting Monday, Dec. 21, starting at 8 a.m.

In the interim, Dukes said she will continue discussions with the neighboring property owners.

“I think between now and the hearing I’m to continue to do more outreach and offer some more tours. I’m going to reach out to some of the immediate property owners again and see if we can sit down and meet halfway (and) alleviate some of their concerns. And just continue to work the case and get the facts out there,” she said. “We have a client and an operator who has a great, stellar track record in this industry. I’m hoping that some of that information can help persuade not only the property owners in the area, but the Board of Supervisors in the long run.”