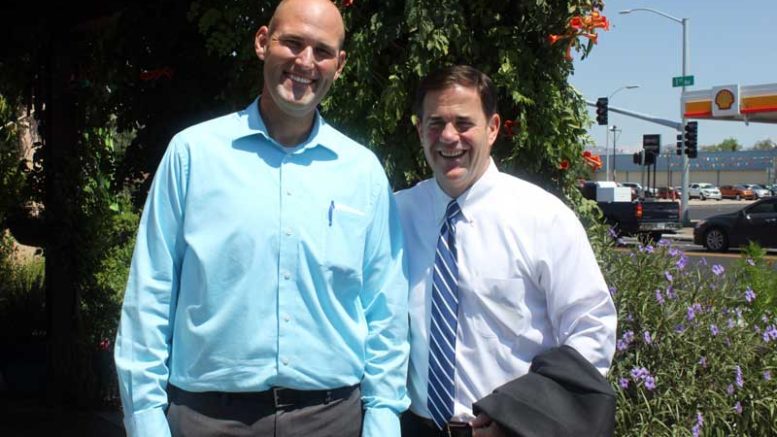 SAFFORD – It’s not every day the governor pops in for a discussion about schools and a burrito. That’s what happened Monday when Arizona Governor Doug Ducey visited the Safford School District.

Ducey told Gila Valley Central that he enjoys visiting school districts in the beginning of the school year to speak with administrators and students about the new year’s agenda. He also took some time to meet with local leaders as well.

“It’s a nice way to get out of the capital, get out of Phoenix and get out of Maricopa County and get over to Graham and Greenlee,” Ducey said.

The Governor toured Safford High School and Lafe Nelson Elementary School before stopping at Casa Manana for lunch. The tour was part of five rural schools that were chosen for a visit. After the meal, the governor and his entourage headed up to tour some schools in Greenlee County. Ducey specifically mentioned being impressed with the school districts ability to rebound after the devastating October 2016 flood and the Career and Technical Education Program (CTE) at Safford High School. The CTE programs include culinary arts, computer technology, early childhood education, auto classes, agriculture FFA and media arts.

Safford High School Principal Torey Leitzke said Ducey arrived at the school at about 9 a.m. and was welcomed by an all-school assembly with a video about the school made by the media arts group. Ducey was also given a Bulldogs T-Shirt and toured the school and interacted with the staff and students.

“I’m just thrilled that he chose us and that he had an opportunity to see what Safford High School is about,” Leitzke said. “We have so many things going on, and I’m just thrilled that we got the chance to highlight that . . . Governor Ducey was very personable and he really enjoyed his interaction with our kids . . . It was great.”

Gila Valley Central caught up to Ducey after his meal, and he had nothing but positive comments for his time in the area.

“The people here are always so welcoming and inviting,” Ducey said. “The hospitality is off the charts.”

Ducey also complimented the Safford School District for its administrators and programs and overcoming adversity.

“How everybody has overcome the floods and how resilient they are with what they had to do at the grade school and being off-site for the full year and the rebuilding at the high school is inspirational, especially when you see what’s going on in Texas,” Ducey said. “Leaders from the community embrace these challenges and overcome them.”

As he was leaving, Ducey commented on his meal and said that it was so large that he wouldn’t have to eat dinner that night.

Ducey has been under fire for the Arizona Empowerment Scholarship Account Program, otherwise known as the school voucher program. The bill signed into law by Ducey expands the current voucher program, which gives funds to parents for placing their children in a private or parochial school. In Graham and Greenlee counties, there are no private or parochial schools and administrators and parents have voiced their opinion that the voucher bill will be bad for public education and take money away from local public schools.

The voucher expansion has been put on hold recently after the Save Our School group received enough signatures to make the bill proceed to the 2018 ballot and allow the voters to either approve or reject the expansion.

Gila Valley gets scant rain so far during parched monsoon

Voices of the homeless: their stories in their words

Watch your step; rattlesnakes are on the move