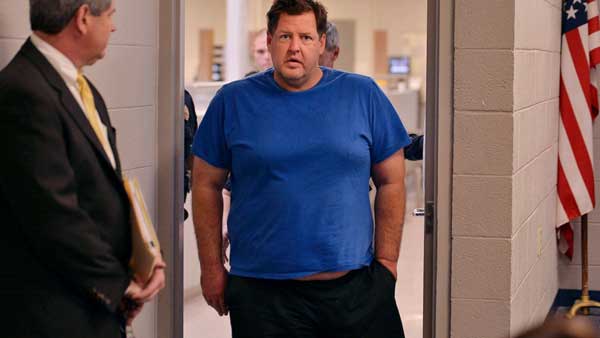 AP Photo: Todd Kohlhepp has been charged with the 2003 slaying of four people at the Superbike Motorsports motorcycle shop in South Carolina. The killed shop owner was married to Melissa Ponder, daughter of David and Kae Player, of Safford.

CHESNEE, S.C. – For 13 years, the relatives came together periodically to grieve one of South Carolina’s grisliest mass shootings and compare leads with stumped investigators.

On Sunday, they gathered again on the anniversary of the crime — this time in a Spartanburg courtroom after an unexpected break led to the man who, authorities say, confessed to the quadruple slayings.

The victims’ relatives sat a few feet away from Todd Kohlhepp as he was denied bond on the murder charges. It was their first chance to face the man accused of killing their loved ones.

After the hearing, Magistrate Judge Jimmy Henson thanked the families for their civility and composure.

“I know there’s a lot of hurt … beyond what a lot of people understand,” he said. 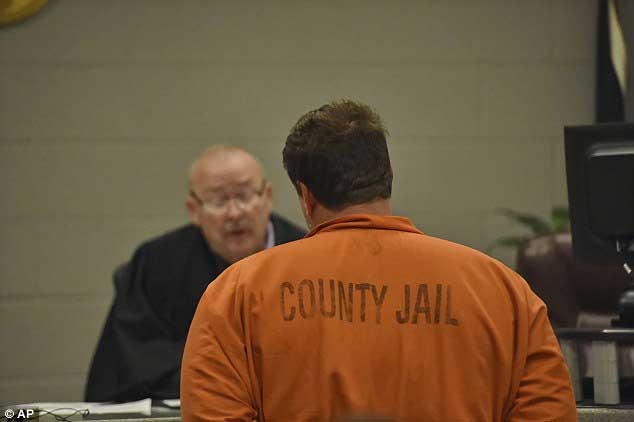 Authorities have charged Kohlhepp, 45, with four counts of murder in the 2003 deaths at the Superbike Motorsports motorcycle shop in Chesnee. The owner of the shop, Scott Ponder was one of the victims. He was married to Melissa Ponder, who is the daughter of David and Kae Player, of Safford. The Safford Center for the Arts is named in honor of David Player.

Kohlhepp’s alleged role in those killings was uncovered, authorities said, after a woman was found last week chained in a locked metal container on Kohlhepp’s property in rural Woodruff.

The murder charges against Kohlhepp represent welcome progress for investigators and families haunted by the slayings at the motorcycle shop. The killings shocked the state and left the victims’ parents and spouses reeling with each new rumor about a possible motive.

“We got ’em today. We got ’em today,” Sheriff Chuck Wright said late Saturday, referring to answers in the cold case. “I’m rejoicing that this community can know that four people who were brutally murdered, there’s no wondering about it anymore,” said Wright, who was first elected to the position about a year after the quadruple slayings.

A Spartanburg County Sheriff’s investigative report from Saturday says Kohlhepp “confessed to investigators that he shot and killed” the owner, service manager, mechanic and bookkeeper of the motorcycle shop, giving details only the killer would know. 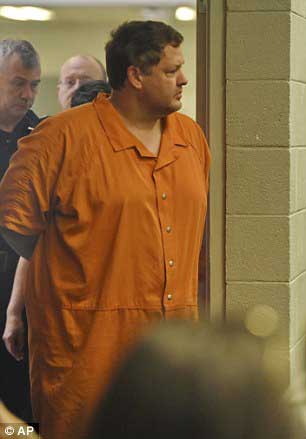 Kohlhepp is also charged with the woman’s kidnapping, and prosecutors say more charges are expected.

Officers are making more grisly discoveries as they unwind a hidden crime spree that unfolded over more than a decade.

The investigation has expanded to other properties that Kohlhepp, a real estate agent, either currently or used to own. Those properties are not limited to South Carolina, Wright said Sunday, declining to be more specific.

Both the FBI and Homeland Security are involved, he said.

Kohlhepp showed investigators Saturday where he says he buried two other victims on his 95-acre property near Woodruff. Human remains were uncovered Sunday at one of those sites, Wright said.

“We’re not even close” on identifying the remains or cause of death, he said. “We can’t tell anything.”

Kohlhepp did not tell investigators who was buried there. Even if he did, investigators can’t take that as identification, the sheriff said.

The excavation of that grave and search for others continues Monday.

The gravesites Kohlhepp pointed to are in addition to the body found Friday at the site. Authorities identified that victim as 32-year-old Charles Carver, the boyfriend of the woman found Thursday. Carver died of multiple gunshot wounds after he and the woman went missing at the end of August.

The Associated Press is not naming the woman because the suspect is a sex offender, though authorities have not said whether she was sexually assaulted.

In Spartanburg, Kohlhepp appeared in an orange jumpsuit for the brief bond hearing and declined to make a statement. He didn’t have an attorney.

After Kohlhepp left the courtroom, Henson told the family members that they would have a chance later to address Kohlhepp in court.

“When it comes your time to speak to that defendant, speak from the heart,” he said. “You have something to say. You’ve been waiting 13 years to say it.”

The father of Brian Lucas, the 29-year-old slain service manager, thanked the judge.

“Your honor, I appreciate your words to us and your counsel,” Tom Lucas said as two others put their hands on his shoulders. “We thank you.”

Standing with his wife before the hearing, Lucas said he wanted to be in court to look Kohlhepp in the eye.

“I want to look at him, and I want to try to use that in healing,” he said.

He and his wife, Lorraine, said there was a vigil Friday night to mark the anniversary of the killings, and gatherings were a regular occurrence over the years.

Before Kohlhepp emerged as a suspect, investigators have said all four victims were killed with the same pistol. They have theorized that the killer came in the back and killed mechanic Chris Sherbert, 26, as he worked. Bookkeeper Beverly Guy, 52, was found just outside the bathroom in the middle of the showroom.

Scott Ponder was found just outside the door in the parking lot. He was Guy’s son. Brian Lucas was in the doorway of the shop.

Kohlhepp was released from prison in Arizona in 2001. As a teenager, he was convicted of raping a 14-year-old neighbor at gunpoint and threatening to kill her siblings if she called police.

Kohlhepp had to register as a sex offender. But that didn’t stop him from getting a South Carolina real estate license in 2006, building a firm and maintaining the appearance of normalcy.

Melissa Ponder said detectives told her Kohlhepp was an angry customer who had been in the motorcycle shop several times.

She said that she had resigned herself to Scott Ponder’s death remaining unsolved — until she got a phone call Saturday evening from detectives.

“It isn’t closure, but it is an answer,” Ponder said by phone. “And I am thankful for that.”

Another grieving relative who came to the hearing, Terry Guy, was Scott Ponder’s stepfather and Beverly Guy’s husband. Guy said Kohlhepp’s arrest means relatives of the victims can now finally be at peace.

The building that housed the shop is now shuttered and surrounded by a chain-link fence along a two-lane highway leading toward the Blue Ridge Mountains.

Two miles away in downtown Chesnee, Danny Lee said the killings rattled his quiet hometown of about 900 residents. The 52-year-old knew the victims and had a bike in the shop for repairs at the time.

“He said he did it. We’ve got to take his word for it,” he said of the suspect. “What I still want to know is why.”