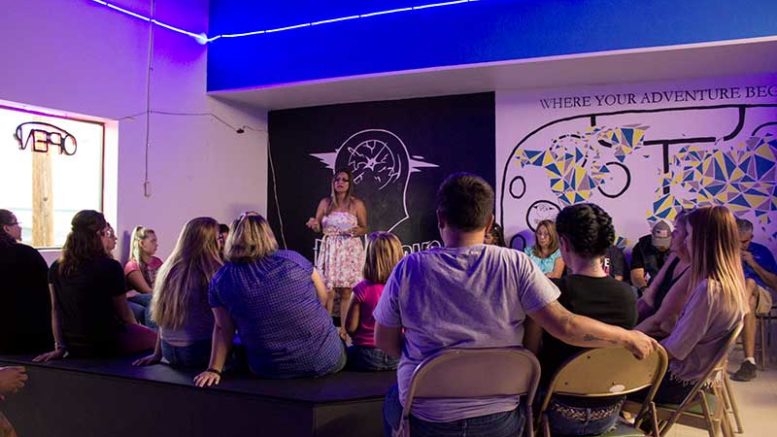 Brooke Curley Photo/ Gila Valley Central: Locals gathered Wednesday night with one voice: Stop the suicides- See something, say something, do something.

SAFFORD – Locals gathered Wednesday night with one voice: Stop the suicides – see something, say something, do something.

It was a filled room Wednesday night at 214 W. 7th St. The gathering consisted of families, city of Safford officials, and individuals from one side to the other of the Gila Valley. The group banded together for the same cause, to stop the suicides.

It may come as a shock to some, but the seeds of such a massive community meeting started small and only three days prior to the event. On Sunday afternoon, one local mom, Amy Crisp, was talking to her teenager about the tragedy of recent suicides and suicide attempts. From that conversation came the idea to start a local suicide prevention support group. The group is represented on Facebook and can be found at facebook.com/groups/282633455573253/.  Amy Crisp and Brandi Jones since joined forces later on, and within three days were able to work with community support to form the meeting. 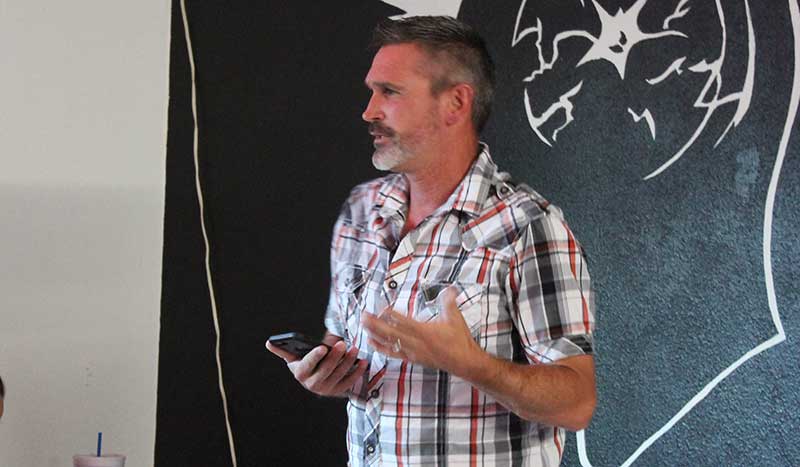 Brooke Curley Photo/Gila Valley Central: Safford Mayor Jason Kouts expresses to the crowd the need for the community to band together in this time of crisis.

Safford Mayor Jason Kouts was one of the first individuals to speak to the standing-room-only crowd. Kouts expressed his love for the Gila Valley and then his sorrow over the tragedy of the recent suicide epidemic. Kouts also delved into his fear of what he might see in his email every single morning. To see an email from local authorities in the morning, Kouts’s worst fear would be that another individual in the community may have ended their life.

“Every time I get an email from (Safford Police) Chief (Joe) Brugman, I hold on (and say) ‘Please no. please no more,’” Kouts said. “We need as a community to come together. We need to see something, say something, and do something.”

Kouts also stressed that through unity and bringing individuals together in religious faith, the community can beat the epidemic.

“We’re going to work hard,” Kouts said “I want our community to be the spotlight. I believe through all of us together, we can make a difference. We’re all in this together. I’m with every single one of you.” 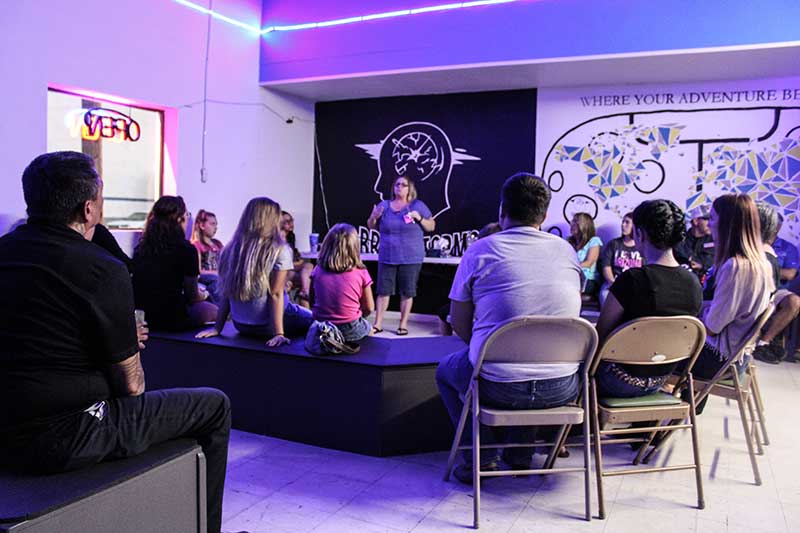 Brooke Curley Photo/Gila Valley Central: In a room filled to capacity, the community banded together to overcome and heal.

Multiple speakers came forward to address the grief, fear, and stigma of suicide. Suicide survivors spoke of their ordeals and recovery. Although the statements made by attendees differed, one underlying aspect remained the same: It’s time to stop pretending that suicide isn’t an issue in the Gila Valley and to break the silence.

Each statement made by the individuals of the community was filled with passion. Sincere condolences were expressed to those present who had lost a loved one to suicide, while conviction and hope were the concrete foundations of each speaker’s statement. Multiple speakers wrote their names and numbers down on a piece of paper to be passed around the crowd to be a local listening ear for individuals suffering from depression and possible suicidal thoughts.

A strong sense of community and family was brought to the attention of the crowd as everyone sat elbow to elbow. Preston Tuscana pointed out to the crowd that the Gila Valley isn’t a larger city where individuals walk together in nameless and faceless droves. Tuscana said that no matter where an individual goes in the Gila Valley, they will meet someone they know. From shopping for groceries to seeing a movie, the community of the Gila Valley is based on friendships and family. Tucsana stressed that as a community, the Gila Valley must remember itself and fight against the suicide epidemic.

“This ain’t Phoenix. This ain’t Tucson,” Tuscana said. “We’re deeper than that. We’re small town, and we gotta keep it that way.” (sic) 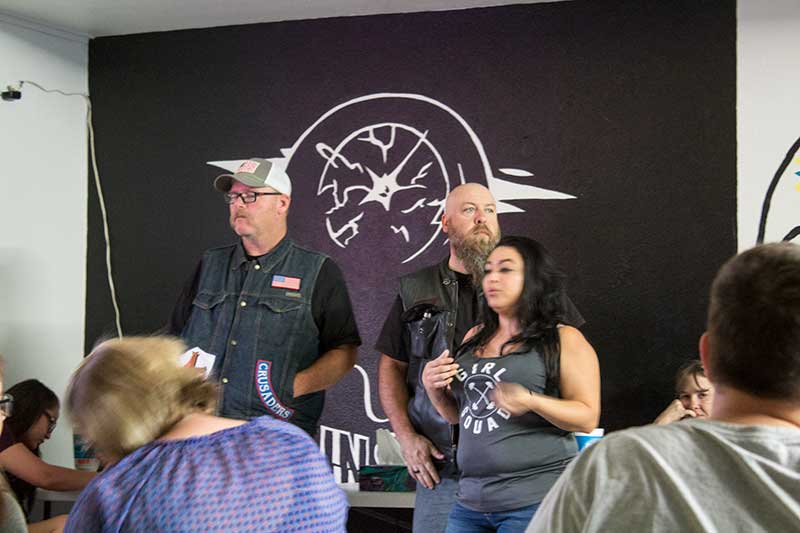 Brooke Curley Photo/ Gila Valley Central: Mike Bien (middle) told the crowd that he would stand up and help anyone who sought counseling.

Mike Bien is a private therapist currently working on his license. Bien has 25 years of experience working with the youth. Standing in front of the crowd, Bien offered his cell phone number as a listening ear to anyone in the community that may need him. Bien later gave Gila Valley Central his email address, mikebien@hotmail.com, so that if anyone wants to communicate may do so first through email and then through the phone.

The next step for the group is a suicide awareness and prevention parade that will be Oct. 6 at 10 a.m. Participants of the parade are encouraged to meet at the Graham County Courthouse at 9:30 a.m. Starting at the courthouse, the parade will walk down Main Street. Everyone is invited to attend. 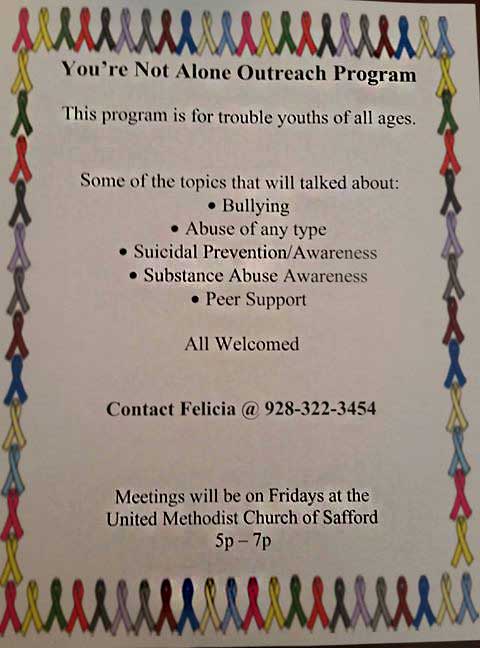 This program is for troubled local youth in the Gila Valley.

On Sept. 25, the community is also invited to the David M. Player Center for the Arts in a meeting of community action from 6 to 7:30 p.m. The public is invited by the Safford Unified School District, in conjunction with the city of Safford, Safford Police Department, Graham County Sheriff’s Office, Graham County School Superintendent, Gila Valley Ministerial Association, community leaders and community members.

Those in need to speak with a counselor or just someone to listen can text “TEEN” to 839863 to speak with someone. During school hours the number is run by counselors who oversee teens who answer the calls.