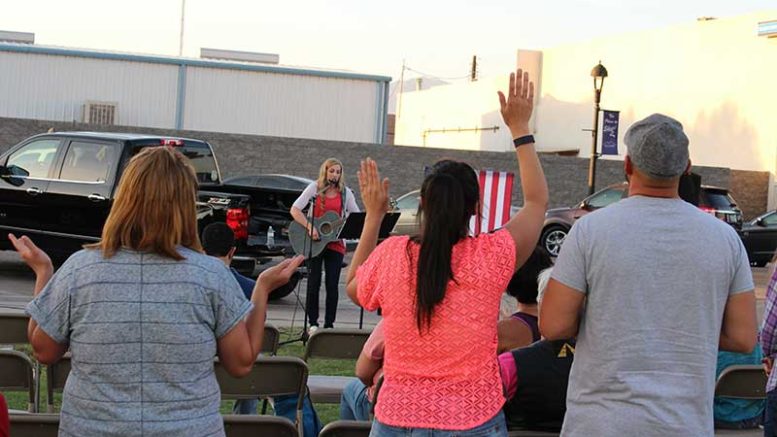 Brooke Curley Photo/Gila Valley Central: Cheyenne Iske sings and plays her guitar during the National Day of Prayer celebration in Safford, bringing the audience to their feet.

SAFFORD- The National Day of Prayer on the Safford City Hall lawn was a familiar sight to many Thursday night as it’s been an annual event in the Gila Valley for more than 20 years.

Multiple religious leaders within the community were called to participate, leading attendees in prayers regarding multiple subjects. Among many others, Dr. Phil Tutor, of New Life City Church, prayed for the media, and Pastor Ron Gonzales prayed for the individuals in the multiple churches of the Gila Valley. A musical number was also performed between prayers by Cheyen Iske, who sang and played her guitar. 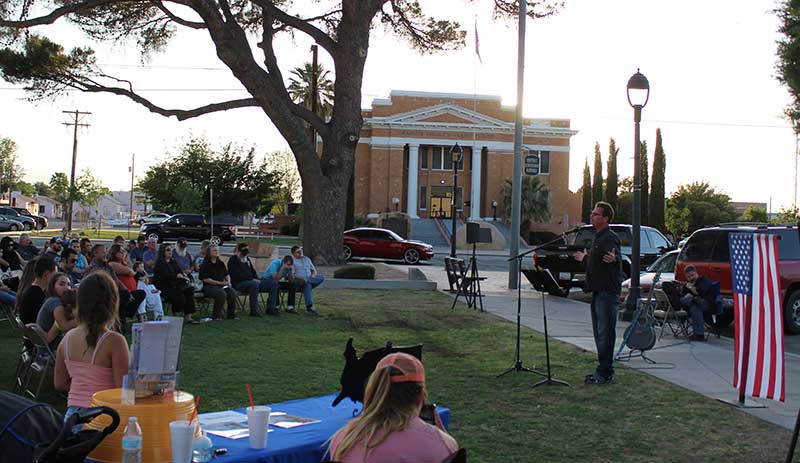 Safford Mayor Jason Kouts attended the event. He told Gila Valley Central that the National Day of Prayer was important to him and encouraged others to attend.

“The National Day of Prayer really means something to me,” Kouts said. “Anytime we can bring anything on the city lawn just gives me a big ol’ smile. It doesn’t matter what religion they belong to (or) what relationship with the Lord they have, it’s just a matter of just coming down and praying and praying to make a difference.”

Safford City Councilman Michael Andazola Sr. attended the even as well and said in the current times of strife the National Day of Prayer was necessary.

“I think it’s a good event,” Andazola said. “I feel it’s something representing what America needs to express itself in bringing our nation together in this time.”

The National Day of Prayer

The National Day of Prayer is observed annually on the first Thursday in May. This day of observance, designated by the United States Congress, asks people “to turn to God in prayer and meditation.” The modern law formalizing the annual National Day of Prayer observance was enacted in 1952 and each year since, the President of the United States has signed a proclamation, encouraging all Americans to pray on this day.

Before 1952, there have been a few other individual National Days of Prayer in United States history:

July 20, 1775 – The Continental Congress issued a proclamation recommending “a day of public humiliation, fasting, and prayer” be observed.
In 1795 – George Washington proclaimed a day of public thanksgiving and prayer.
May 9, 1798 – John Adams declared this day as “a day of solemn humility, fasting, and prayer.”
March 1863 – On March 3, Abraham Lincoln signed a Congressional resolution, during the Civil War, which called for April 30, 1863, as a day of fasting and prayer.