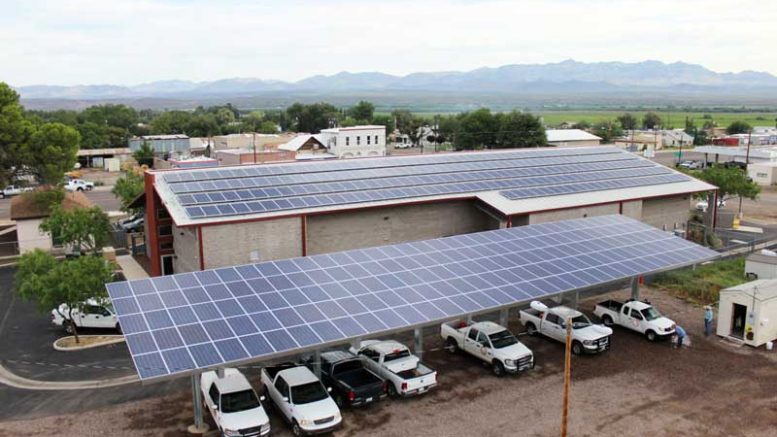 PIMA – The thrill owners of rooftop solar systems get when seeing their electric meters go backwards as they put electric power back onto the grid may not be the same for future owners as they won’t be credited the same for the power they generate.

The Arizona Corporation Commission (ACC), which regulates utilities including the Graham County Electric Cooperative, voted 4-1 on Dec. 21, 2016, to do away with net-metering and restructure how distributed generation is compensated and paid for in Arizona. While the measure was mostly in reaction to those with rooftop solar systems, it applies to any distributed generation system, including wind turbine systems.

Net-metering was adopted in 2009 and allowed customers to be given full retail credit of the power they generate and allowed for selling back excess at wholesale. That means if a system put 5 kilowatts back onto the grid during the day and the household then used 5 kilowatts from the grid that night, the customer would not have any electric power use charge for that day. At the end of the year, if the system had produced more power than used, the power was then sold to the electric department at a wholesale price. 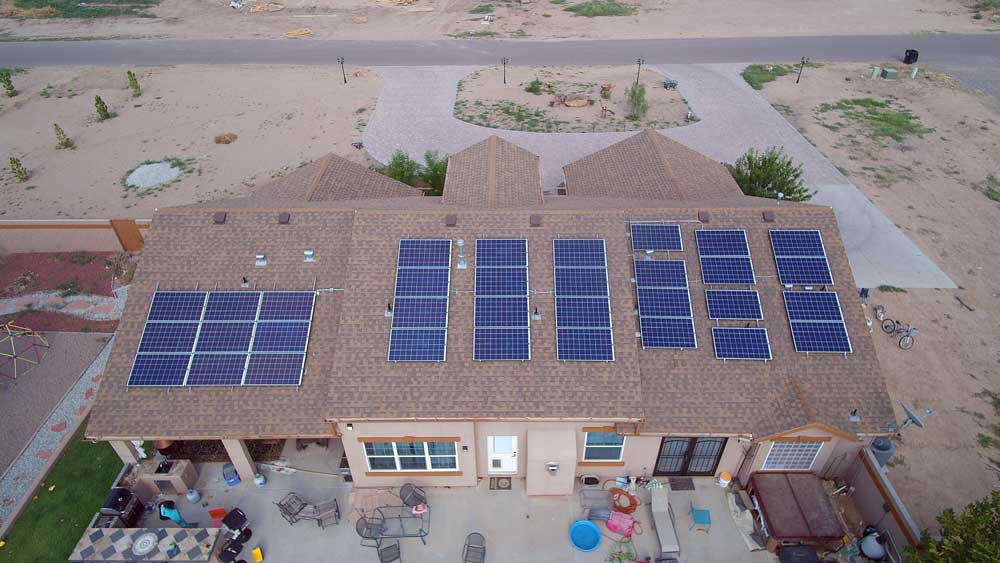 Under the new regulation, any power put onto the grid from a distributed generation system will be paid a set “export rate”. While the rate is yet to be determined, Graham County Electric Cooperative General Manager Kirk Gray told Gila Valley Central the initial export rate could likely be roughly 5 cents per kilowatt hour. The cooperative currently sells its electric power at slightly more than 11 cents per hour, so in the same scenario as above, the solar customer would be paying about 6 cents per kilowatt hour to get back the electricity their system put on the grid during the day. Gray said he believed it will take about five years to fine tune exactly what the rate will be, however, once the first rate is initiated, solar customers will be locked into their initial rate for 10 years.

The export rates will be based on wholesale rates utilities pay for solar energy from large plants and will need to be approved by a rate case by the Arizona Corporation Commission. The move creates a separate rate class for those with solar systems.

People who have systems in place prior to the initialization of the rates will be grandfathered in with the net-metering system for 20 years. Gray said he supported the commission’s decision to grandfather in existing solar customers because he didn’t want the new rates to be a bait-and-switch type of deal. Commissioner Andy Tobin said as much in a press release about the decision. 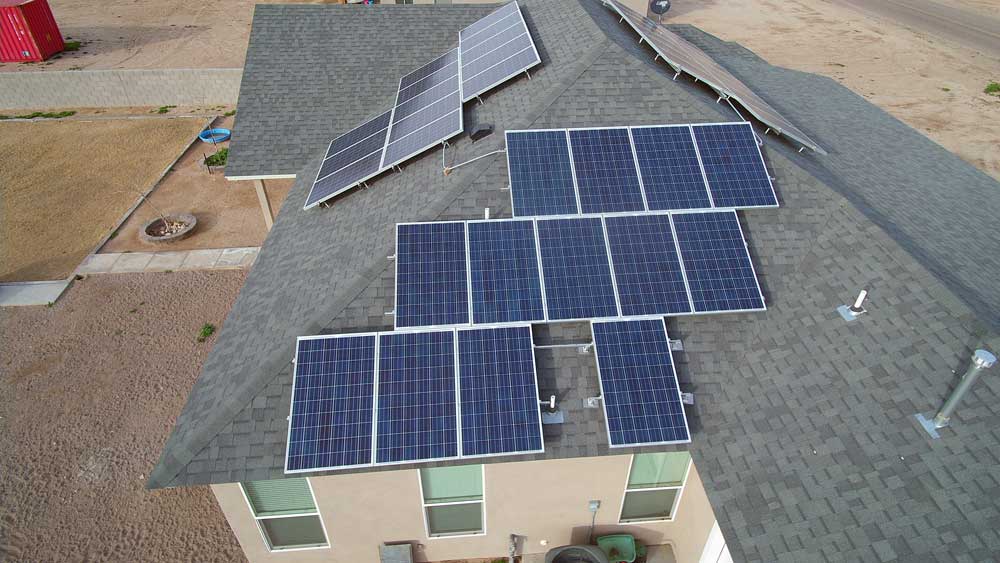 Jon Johnson Photo/Gila Valley Central: This Pima residence has solar panels on three sides of its roof to capture as much sun as possible.

“Existing solar customers can rest assured that their investment is save,” Tobin said. “Our decision recognizes those customers while taking the next step by determining rates which takes into account advancements in solar and other renewable technology which helps us push forward proactively.”

Gray said the move away net-metering was necessary to ensure those with solar systems pay their fair share to maintain the electric grid “because when the sun doesn’t shine they want electricity too.”

Gray maintains the cooperative still fully backs solar power generation and points to the 386-panel, 96-kilowatt system on the roof of its headquarters and parking structure in Pima as proof. The system, which cost $327,435 and produces an estimated 211,094 kilowatts per year, handles all of the GCEC building’s power needs and puts the excess power back onto the grid to cover line loss and benefit all of the cooperative’s customers.

That wasn’t the impression solar customer Shayla McBiles said she received when her family put its 39-panel rooftop solar on their new home along 1200 West in Pima. She said since her system began operation she hasn’t had an charge for electric usage.

“No one ever really seems thrilled that you’re getting solar,” she said. “I don’t know if it’s because they’re not going to be making as much money off of you, but, when we were going through the process of getting it and getting things approved, they (GCEC) kind of dragged their feet. They just don’t seem like they have the most positive attitude when you go in there . . . They almost seem annoyed that you’re getting solar; like they don’t like it. 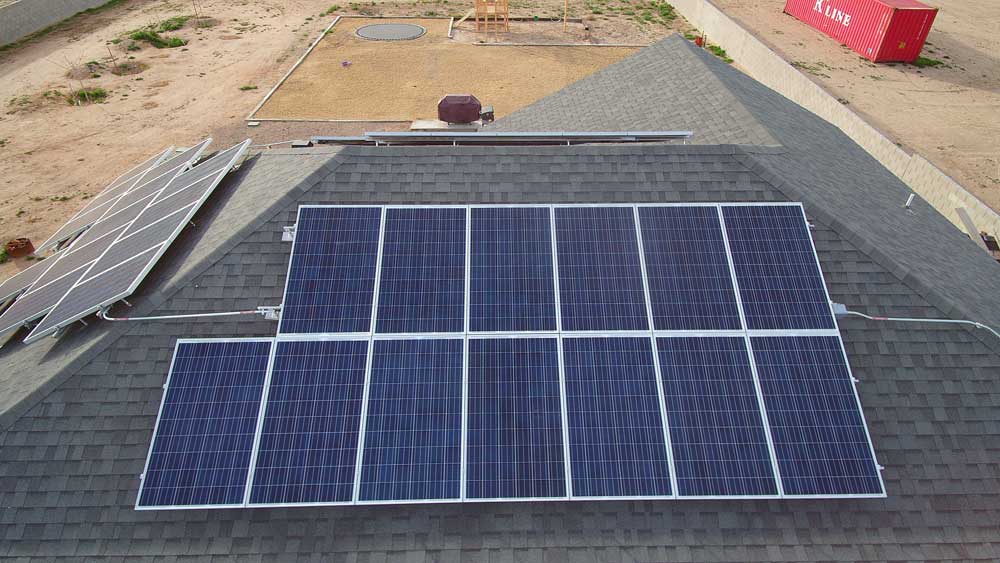 Jon Johnson Photo/Gila Valley Central: The McBiles family hasn’t had an electric usage bill since the installation of their solar system.

McBiles wondered if her system would still be grandfathered into the net-metering if she decides to move to another part of town and take her solar panels with her.

Even without a usage charge, anyone hooked up to the grid is still charged a basic $9 per month meter charge and is susceptible to taxes.

As a private utility, the city of Safford isn’t governed by the Arizona Corporation Commission, and unlike with the cooperative, net-metering is here to stay, according to Safford Utilities Directory Jenny Howard.

Safford gives a one-to-one credit for power put on the grid and then taken back but does not pay for excess generation at the end of the year, like in the case of current net-metering in the county. However, Howard said the city is looking at amending its current policy of zeroing out customers at the end of the year to change it to when most are already zeroed out so those with rooftop solar (or wind) can get the most out of the power they generate.

“We’re just seeing what we can do better for the customer,” Howard said. “ It (net-metering) is not going away.”

Rush to get solar and movement off the grid

Gray said the cooperative had already seen roughly 10 times more applications for solar systems over the previous year and that the ACC ruling to do away with net-metering will only likely increase the demand.

He also said future solar customers are also more likely to utilize battery storage of their excess power instead of sending it back to the grid and a fair number could even likely choose to go completely off the grid.

“That, in my opinion, is going to be the wave of the future,” Gray said.

While still not economically feasible versus connection to the grid as most battery packs large enough to accommodate a single-family home range from $10,000 to $20,000, Tesla has introduced its Powerwall 2.0, which can store 13.5 kWh and provide at least 5 kWh of continuous power. The Powerwall 2.0 costs $5,500. Additionally, Tesla has started battery production at its new “Gigafactory”, which itself is powered by a 70 MW solar rooftop array. The factory will produce cells, battery packs, energy storage products and vehicle components. As the factory’s phase two and three are complete and the number of produced battery packs increase, perhaps the price will come down as well. 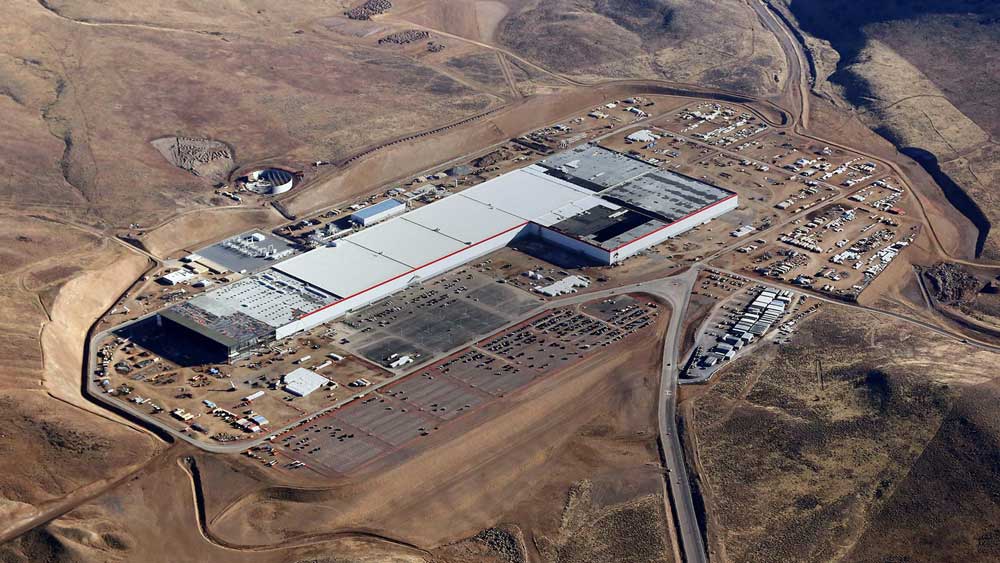