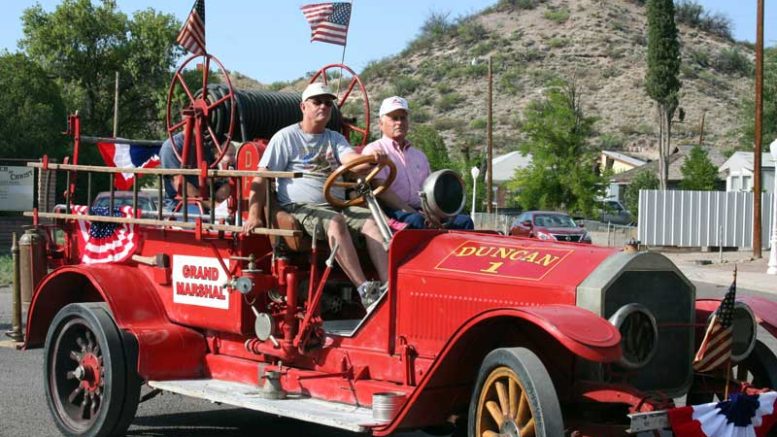 DUNCAN – Sure, she has had a face lift or two, some body work and what one might refer to as some internal surgery of sorts. That should come as no surprise as she is a century old. She is a great source of pride for many and rightfully so.

Betsy is Duncan’s 100-year-old fire engine and she ran under her own power as Grand Marshal of Duncan’s 2017 July 4 Parade. She led the procession of about 25 entries down the Old West Highway (U.S. 70) around 8 a.m. It was still cool enough for the folks who lined the road to be comfortable in their portable chairs and under the many umbrellas. 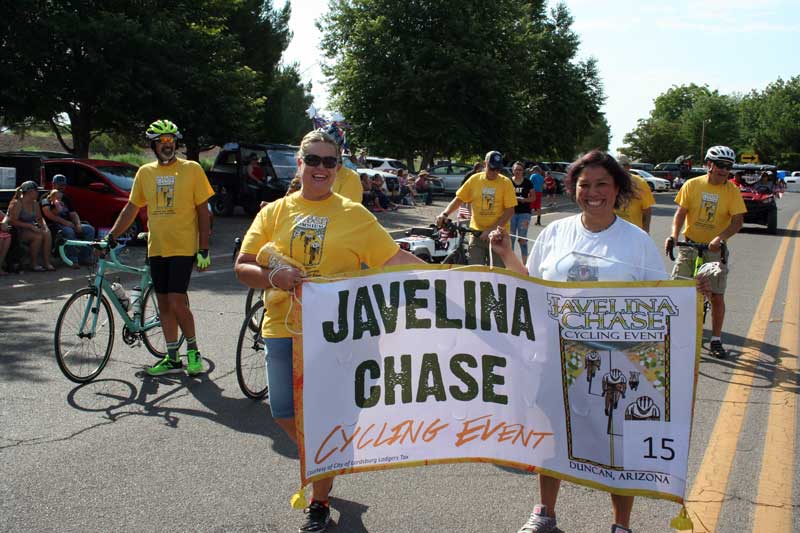 Photo By Gualterio Casias: Bicycle enthusiasts remind people of the highly successful Javelina Chase bicycle races held in Duncan in the springtime. Entrants from all over Arizona and parts of the U.S. have joined up in the event. The Javelina Chase had a humble beginning, but recognition of the race is becoming more widespread, especially in the American southwest.

Betsy very much signified the strong heartbeat and endurance of rural America, which Duncan truly is. The same applies to the entire Duncan Valley.

There were 25 entries in the parade, which was quite smaller than parades of the past. That was where quality versus quantity played a role. People stepped up and participated. Boy Scouts served as the color guard in the place of groups that had previously served in that capacity. Logan Basteen, Bryant Rapier and Lucas Basteen marched proudly as they held aloft the American and Arizona state flags. They marched just in front of Betsy to set the parade’s tempo. 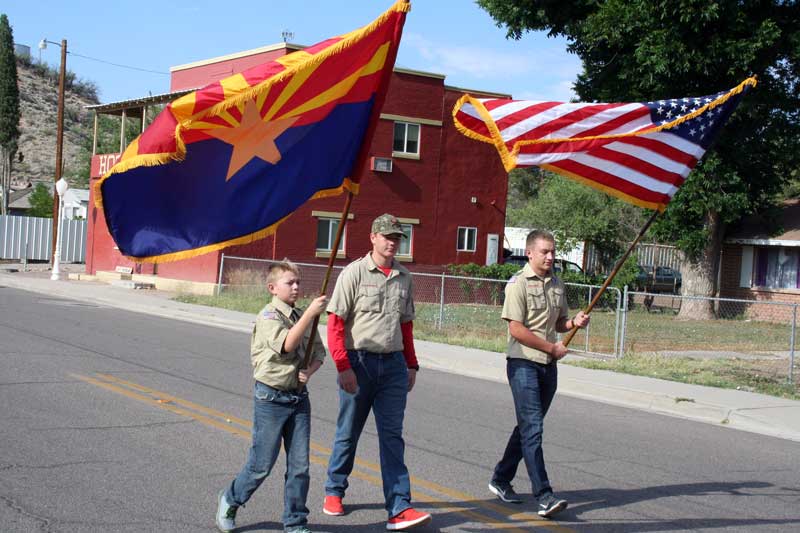 Photo By Gualterio Casias: Boy Scouts from Troop 5031 serve as the Color Guard that leads the 2017 Duncan July 4th parade. They are, from left, Bryant Rapier, Logan Basteen and Lucas Basteen.

The Wilkerson Land & Cattle Co.’s entry of a horse-drawn wagon loaded with bales of hay strongly represented the Duncan Valley’s agricultural history built on its production of cotton and cattle and the importance of the horse and wagon in Duncan’s and the rest of Greenlee County’s development..

Handling the team of handsome horses was Keith Wilkerson of the Wilkerson Land & Cattle Co.  The steeds dropped a few “horse apples,” which came as no surprise. None of the parade entrants following the horses stepped on any of the apples, so there was no problem. 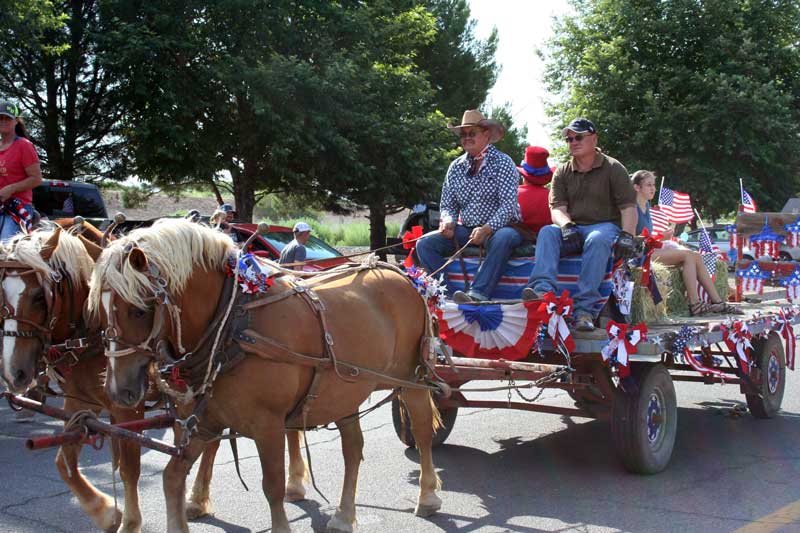 Photo By Gualterio Casias: Keith Wilkerson handles the reins on these two, beautiful, powerful-looking horses during the 2017 Duncan July 4 Parade. Accompanied by another cowboy, the parade entry represents the Wilkerson Land & Cattle Co.

One man did comment that the horse droppings reminded him of when he was a youth and was raised working with horses and cattle.

“It’s probably kind of weird to some, but them apples brought back some pleasant memories – a pretty clean corral, a light morning rain and the smell of a bale of alfalfa being broke open,” he said. “Don’t know why, but that’s what comes to mind.”

The pavement was starting to heat up but that did not seem to bother the group of dancers which included tots and teenage girls happily making their way down the road. 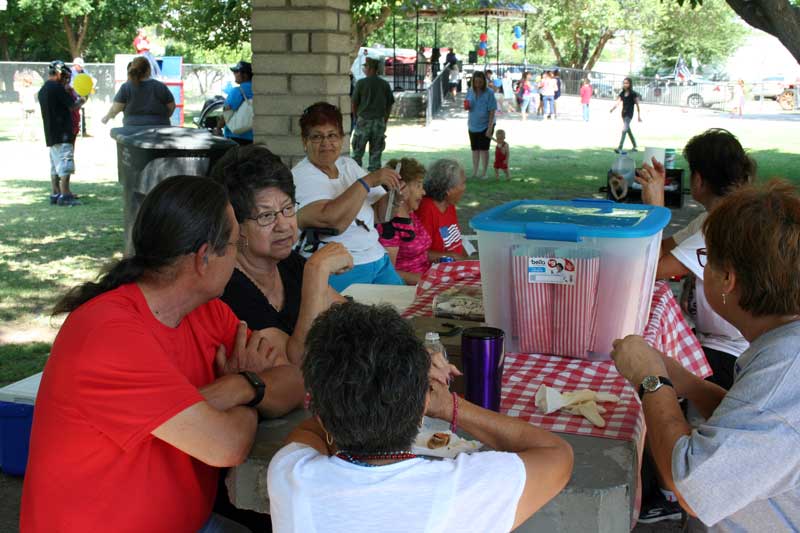 Photo By Gualterio Casias: Members of St. Mary’s Catholic Mission in Duncan sell burros and other delicious food at Centennial Park during the 2017 Duncan July 4 celebration. The ladies quickly sold out of burros. At upper left is former Duncan Town Councilor Felipa Sublasky.

There were the Greenlee Democrats, who carried brightly-colored signs encouraging the public to support public education. Among them was Vietnam War combat veteran Ray Veteran, a retired U.S. Marine, who lives in Solomonville in neighboring Graham County. He said he strongly supports public education and made the trip to Duncan to show that support.

The importance of family was highlighted in an entry by the Richard Lunt family. It was packed with children smiling and waving at the crowd. Lunt is a two-term Greenlee County supervisor who represents Distict 3, which includes the town of Duncan and all unincorporated communities and households in that district.  Another reason the surname may ring a bell for many is the well-known and respected Lunt Dairy operation near Duncan. 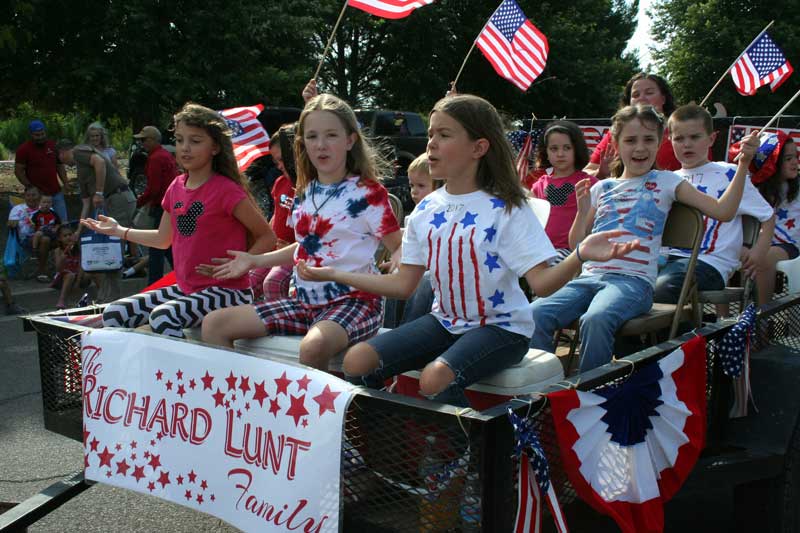 Photo By Gualterio Casias: An emphasis on family and community were key aspects of the 2017 Duncan July 4 Parade. Here members of the Richard and Coleen Lunt family demonstrate the importance of a close family. Richard Lunt serves as Greenlee County District 3 Supervisor.

Following the parade there were activities at Centennial Park that included the traditional dunk tank and food provided by members of St. Mary’s Catholic Mission. At sundown came one of the highlights of the Independence Day – fireworks.