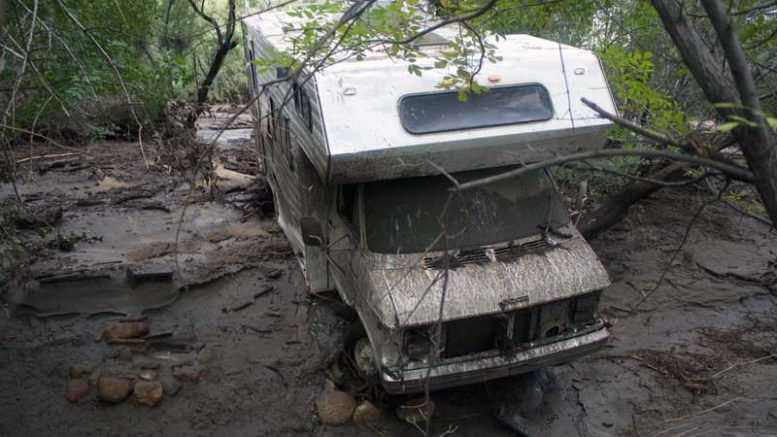 Jon Johnson Photo/Gila Valley Central: People were attempting to remove this RV from near the creek when a flash flood overtook it Sunday.

GRAHAM COUNTY – At least two homes suffered severe damage Sunday when a flash flood of Frye Fire ash and debris poured through Ash Creek. It was the second time in as many days the roadway has flooded. 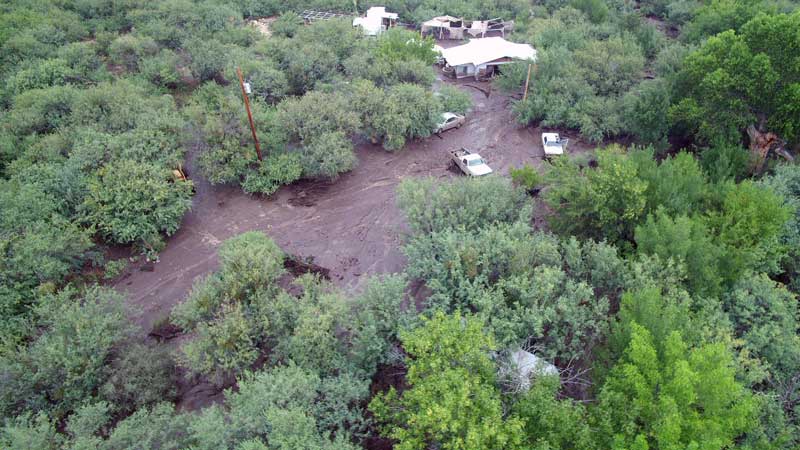 Jon Johnson Photo/Gila Valley Central: A flash flood in Ash Creek of runoff from the Frye Fire send ash and debris through this residence, damaging not only the house but at least three vehicles and an RV.

The volume of water reshaped the creek in various points, flooding homes, damaging vehicles and stranding numerous people who were recreating at Cluff Pond. 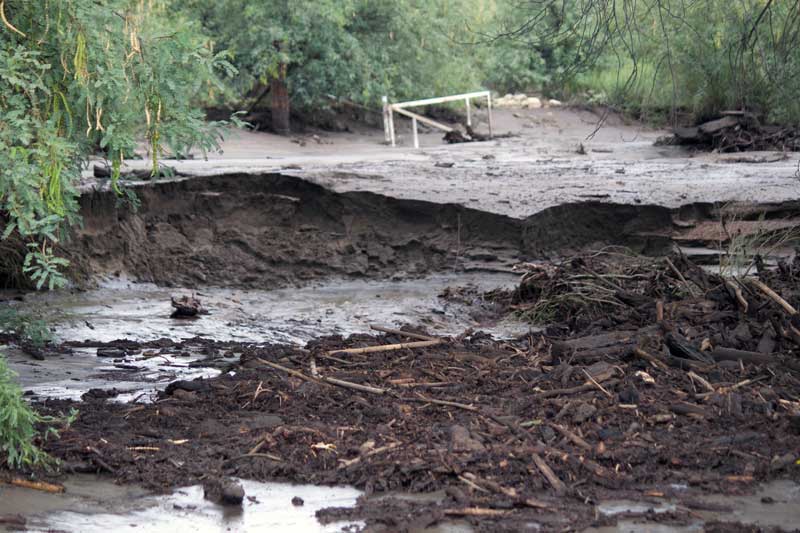 The flood waters ran through two homes on the north and south side of Cluff Ranch Road, south of W. Layton Road and near Cluff Pond #1.

While it was overcast in the area, it didn’t actually rain there, and the floodwaters came from rainfall up above on Mount Graham early in the afternoon. With little to hold back the deluge with the rain falling in one of the high-burn severity areas of the Frye Fire, the flood waters hit hard and hit fast. 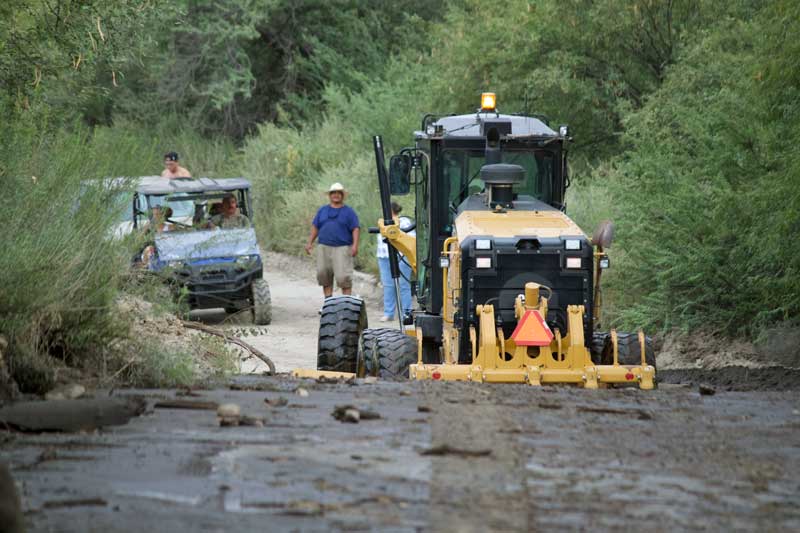 Jon Johnson Photo/Gila Valley Central: A Highway Department worker clears the way so stranded motorists who were at Cluff Pond #3 can cross.

A neighbor of the residents’ whose houses flooded, Jim DeLong, was helping his neighbor move his recreational vehicle that had already got stuck in the mud from the previous flood when the waters suddenly and unexpectedly hit.

“All of a sudden I saw the water in the creek turning brown and I looked around and there was a wall of two-foot water just full of logs and everything,” DeLong said. “That water just slammed into the house (and) wiped out the chickens and his whole barnyard area.” 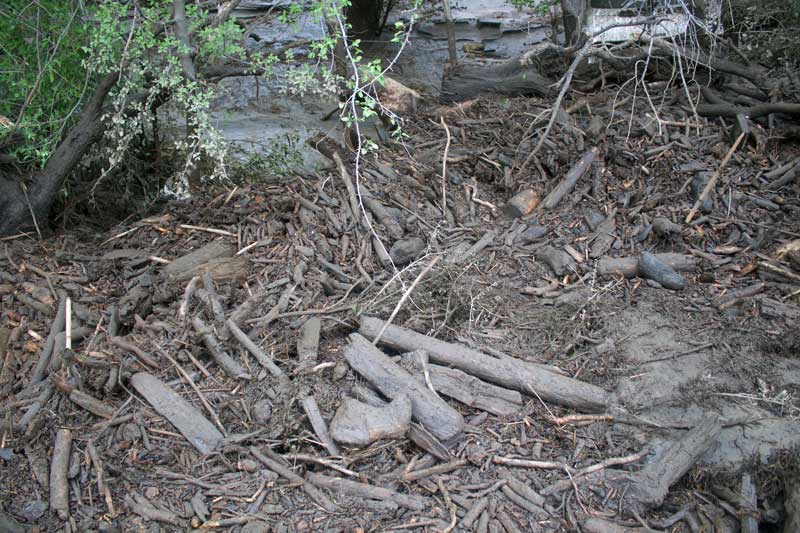 Jon Johnson Photo/Gila Valley Central: A large amount of burned and broken tree limbs also came down with the ashy water in the flood.

DeLong also described the residence to the north that was damaged as well. 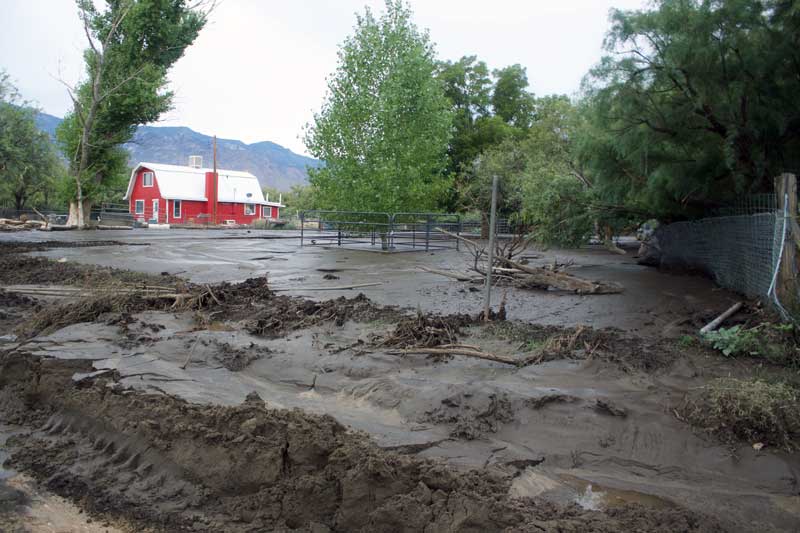 Down the road north of W. Layton Road, the creek once again crossed Cluff Ranch Road in two places and forced a closure there as well. Just south of the closure sits James Smith’s red barn residence and a plethora of animals. The flood left more than a foot of ash mud on a good portion of Smith’s property, but he said his house didn’t suffer any damage and none of his animals were harmed. 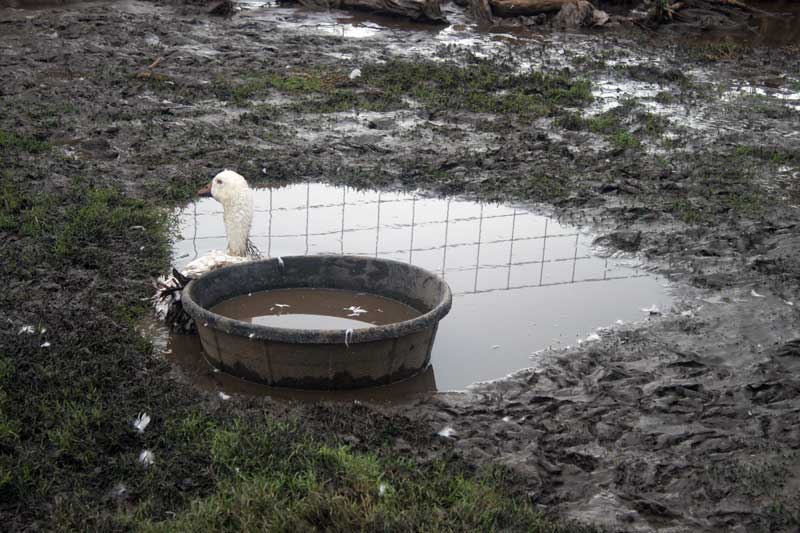 A 24-year resident had a different take on all the displaced ash and said it could be ultimately good for the road. He said usually it is really sandy that can’t be compacted but the ash will compact nicely and make a more stable part of the Ash Creek crossing. 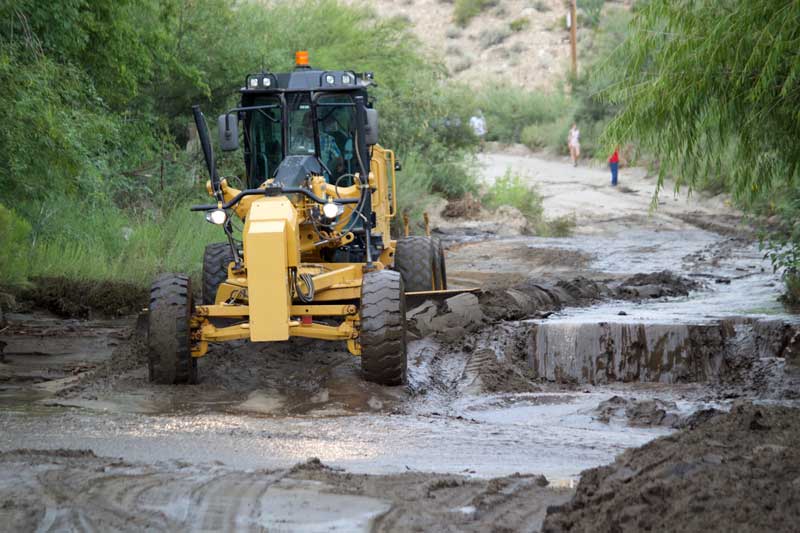 Graham County Search and Rescue responded to the area and the Graham County Highway Department utilized heavy machinery to clear the roadways. Several vehicles that were at Cluff Ponds #3 were stranded for a few hours due to the flood, but the diligence of the Highway Department workers paid off and everyone was accounted for and uninjured. Both areas of Cluff Ranch Road were reopened by 6 p.m.