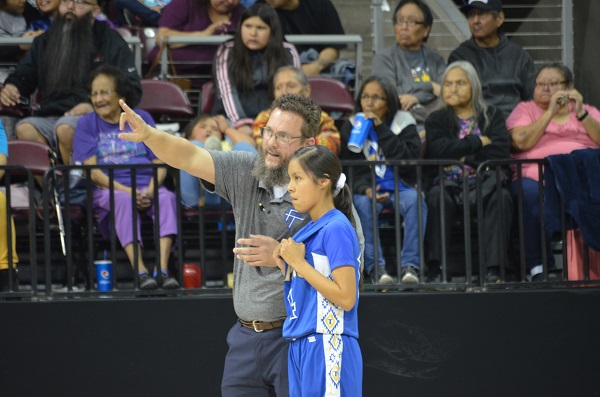 PRESCOTT VALLEY – For the second time in two weeks the Fort Thomas boys basketball team faced off against the Patagonia Lobos. The Apaches led in the first game by nearly 30 before winning 75-57. It’s always tough to play the same team in your first playoff game but The Fort battled through to a 77-48 victory.

It wasn’t pretty early for the Apaches on offense but still managed 17 first quarter points and held a 17-9 lead. They pushed that lead up to 35-25 at the break behind a big first half from Jeremiah Bullis off the bench.

Patagonia wouldn’t go away that easily though as they played the Apaches even in the 3rd quarter but when the 4th quarter started it was like a new team for Fort Thomas. They outscored the Lobos 22-9 to blow the game wide open and cruise to the semifinals.

Malachi Rogers and Brad Johnson scored 18 points each for the Apaches. Skyler Kindelay chipped in 14 and Bullis ended with 13 points and 11 rebounds. Santiny Aguilar led the Lobos with 18.

The Lady Apaches played in one of the strangest playoff games of the day. They waded through 47 fouls called in a nearly 2 hour game to get the win over #3 Salome. The sixth seeded Lady Apaches used their height and quickness to secure the victory.

The flow of the game took a little bit on both sides and at the end of the first quarter, Salome led 5-4. Chase Stanley got hot in the second quarter though with 8 points and Fort Thomas extended their lead to 21-19 at the half.

Fort Thomas methodically outscored the Frogs in the 3rd quarter 14-7 to grab control of the game. Two of the Salome starters fouled out in the 4th quarter which allowed The Fort to hold on for the 45-31 victory.

Stanley led the Apaches with 20 points. Kyia Haws had 12 points and 18 rebounds. Tatum Milts led Salome with 11 points and 13 rebounds.

The Lady Apaches will take on #2 Rock Point today at 5pm at Yavapai Community College for a chance in tomorrow’s championship game.