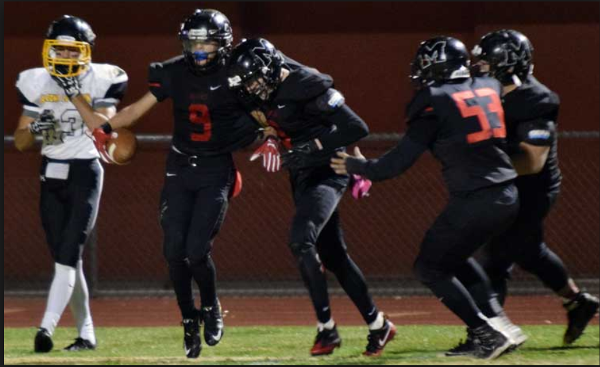 Morenci celebrates during their 1st Round win vs Arizona Lutheran last season.

Coach David Gallegos returns for his 2nd season. He not only led the Wildcats to the playoffs in his first season, they picked up a playoff win as well. Morenci’s schedule is back-loaded with games against Round Valley, Pima and St. Johns to end the year.

Coach Gallegos touts his offensive line as the strongest part of the team this season. They will open the running lanes up for a running back by committee this season. Leading rusher Steven Chavarria graduated and leaves a big hole. QB Mark Roybal will be asked to carry the football this season in the shotgun option attack. He rushed for just over 100 yards last season in 5 games. Running back Isaac Pacheco is poised to slide in to the starting line up this season. He gained 300 yards and scored 4 touchdowns last season.

The top receiving option on the outside will be Tito Casillas when Roybal airs it out on play action.

Again the defensive line will be big and strong this year anchored by Matthew Garcia. The Wildcat defense had a great season last year, shutting out 3 opponents, and holding 2 more to just single digits. They will need to bring that same type of attitude into the 2018 season to stop some of the high scoring offenses they have on the schedule.

This isn’t the toughest schedule I’ve seen for the upcoming season. They will get a test right out of the gate though with a week 0 matchup with 2-time defending State Champion Thatcher. After that  the Wildcats could roll off 6 straight victories before they have a big showdown with Round Valley. I would expect Morenci to put up a similar record as last year, in the 7-3 neighborhood, and be back in the playoffs for the 2nd straight season.