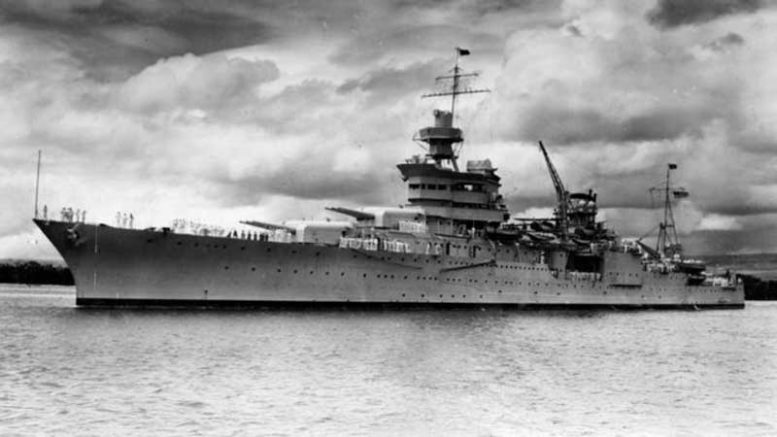 The USS Indianapolis was torpedoed during WWII by a Japanese submarine. The sunken vessel that transported critical components of America’s first atomic bomb was recently located by Microsoft co-founder Paul Allen.

“Japanese submarine slammed two torpedoes into her side, Chief.  We was comin’ back from the island of Tinian to Leyte. We’d just delivered the bomb, the Hiroshima bomb.  Eleven hundred men went into the water.  Vessel went down in 12 minutes . . .  316 men come out, the sharks took the rest.  June 29, 1945.”

Anyone familiar with the classic cinema thriller “Jaws” probably recalls the mesmerizing scene in which Quint (Robert Shaw), the seasoned shark hunter from the fictional seaside resort of Amity Island, Mass., recalled his World War II days aboard the Navy heavy cruiser USS Indianapolis and the harrowing experiences following its sinking by a Japanese submarine.

The USS Indianapolis was a combat ship commissioned in 1931 and destroyed in 1945. Measuring over 600 feet in length, it was smaller than a battleship and aircraft carrier but provided lethal firepower when called upon.

For the most part, the dialogue in the movie was historically correct, except the Indianapolis was actually sunk on July 30, 1945, just a few weeks before the end of the war. For some particular reason, Hollywood scriptwriters decided to change the date or were uncertain of the actual date of the sinking.

In its final days at sea, the Indianapolis was tasked with delivering critical components of America’s first atomic bomb, “Little Boy,” to a naval base on the small Pacific island of Tinian, located in the Northern Mariana Islands, about 1,500 miles southeast of the mainland of Japan. The bomb would be dropped on the Japanese city of Hiroshima a few days later on Aug. 6, 1945.

After handing over the bomb components in Tinian, the Indianapolis returned to Guam Island for another assignment. Readers may recall Guam has been in the news recently as being a potential missile strike target by North Korean Dodo bird Kim Jong Un. He insists his military has the capability of launching ballistic missiles capable of hitting Guam, Hawaii and the U.S. west coast. By most accounts, Lil’ Kim’s boasts seem highly exaggerated.

On July 28, 1945, the Indianapolis sailed from Guam to link up with the battleship USS Idaho in the Leyte Gulf in the Philippines. The invasion of Japan was in the works and many large naval vessels were preparing for the assault.

The Indianapolis never rendezvoused with the Idaho.

Unfortunately, the Indianapolis left Guam without destroyer escort. Destroyers are smaller, swifter ships and were used extensively to accompany and protect larger vessels. One of their primary duties was to hunt and destroy enemy submarines.

On a personal note, my dad was a young Navy officer assigned to a destroyer in the Pacific during WWII. He was stationed several hundred miles off the Japanese coast when the blast from “Little Boy” leveled a large portion of Hiroshima. Three days later, a similar bomb, “Fat Man,” would melt the city of Nagasaki. Japan surrendered soon thereafter.

Shortly after midnight on July 30, 1945, when most of the crew was sleeping – except for nighttime watch and maintenance personnel – two Japanese torpedoes ripped into the hull of the Indianapolis. Massive explosions caused from ruptured fuel tanks and powder magazines set off a series of additional detonations, splitting the ship in two. The “Indy” sank in less than 15 minutes.

Of the 1,196 crew members, 900 managed to escape into the water. Because of radio silence mandated by Naval headquarters due to maintaining the secrecy of the atomic bomb delivery and botched emergency distress signals, the sinking of the Indianapolis went unnoticed until finally, the Navy reported it as missing from its intended arrival in Leyte.

During the ensuing days, many crew members succumbed to injuries, drownings, heat, and thirst, but a large number of casualties were also the result of the worst shark attack ever recorded. The feeding frenzy lasted several days until finally on the fourth day a passing Navy plane spotted the survivors and radioed for help.

Another plane, piloted by Lieutenant Adrian Marks, disobeyed orders and landed his seaplane to deliver rafts, survival supplies and rescue as many men as his aircraft could safely manage. Later that night, destroyer USS Doyle arrived on scene to retrieve the remaining sailors.

Out of the original crew of almost 1,200, only 317 were rescued. The remaining shipmates were either killed by the torpedo attack, perished from the horrific onboard explosions or died during their terrible four-day ordeal in the shark-infested waters.

On Aug. 19, 2017 – 72 years later – the wreckage of the Indianapolis was discovered. Led by Microsoft co-founder Paul Allen, broken remains of the vessel were found on the floor of the Philippine Sea, 18,000 feet below the surface. The Indianapolis’ “35” hull identification number, ship bell and several other artifacts associated with the ship provided positive evidence the steel carcass is the actual remnants of the doomed ship.

Today, only 38 survivors are known to exist, most of them in their late 80s to mid-90s. USS Indianapolis reunions have seen a gradual reduction in attendance, primarily due to the advancing age of the sailors and their deteriorating health. It is doubtful very many more annual get-togethers will be possible. These remaining souls endured a special unimaginable hell in their younger life – a fact of war not normally considered.

Like numerous WWII historical events, most of the people who participated in them have passed on, leaving only a small remnant to recall the legends and lore of a bygone era.