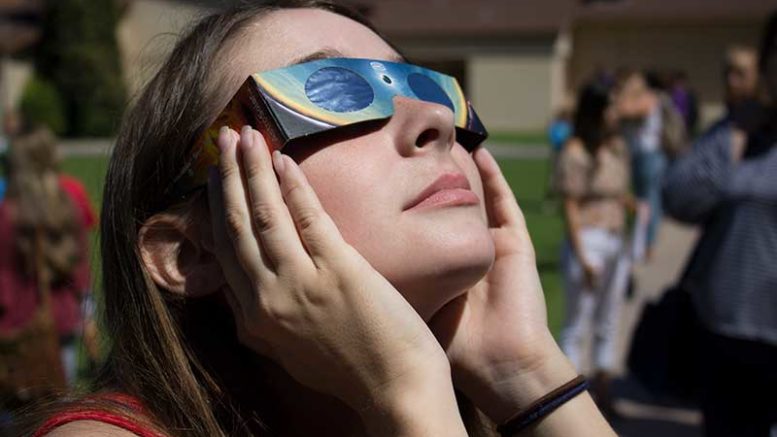 Brooke Curley Photo/Gila Valley Central: A student views the eclipse with the aid of EAC's eclipse glasses at the viewing event Monday.

THATCHER – For the first time since 1979, the United States saw a total eclipse. Although Arizona was not one of the states to see the eclipse in its totality, that didn’t stop the locals in the Gila Valley from looking up to appreciate the splendor.

Monday’s solar eclipse was a sight to see all over the Gila Valley, but roughly 300 residents gathered at the Eastern Arizona College lawn to view the splendor with the aid of the college’s many sun-monitoring devices. College students came in droves, mixing with three grades of children from the Pima School District, who had arrived on buses to view the celestial event. EAC assisted in the viewing by placing multiple types of devices on the lawn for the public to use. There was a limited number of eclipse glasses, a variety of pinhole projectors, welding glass, and a large format binocular projection viewer, as well as a Sunspotter, a purpose built solar telescope, and filtering telescopes. 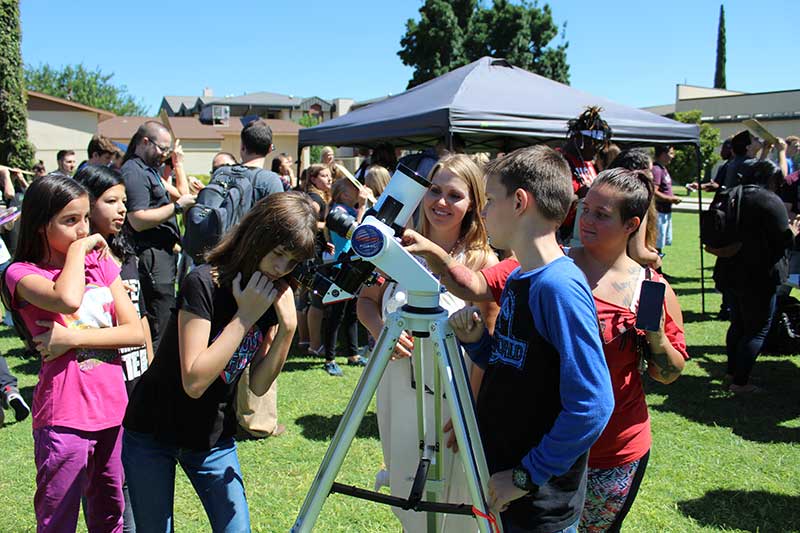 Brooke Curley Photo/Gila Valley Central: Individuals came in droves to look through the variety of telescopes provided by EAC.

David Morris, who runs the Earth and Space Sciences Department at EAC, told Gila Valley Central that he had been getting ready for the eclipse for roughly a month beforehand. He ordered the solar eclipse glasses months in advance and worked hard from the wee hours of the morning to set the viewing area up for the public. Morris said that all the work, on the first day of classes nonetheless, was completely worth it.

“What a great way to start the semester,” Morris said. “I’ve been planning way in advance for this because, for me, there are many difficulties on the first day of classes.”

Morris said the eclipse would be the memorable thing that sticks out in the minds of his students. After graduation, Morris said his students will still come up to him and say that they remember a certain aspect of his class, and he was so happy that his current students would be given the opportunity to view the eclipse and gain such a powerful experience. 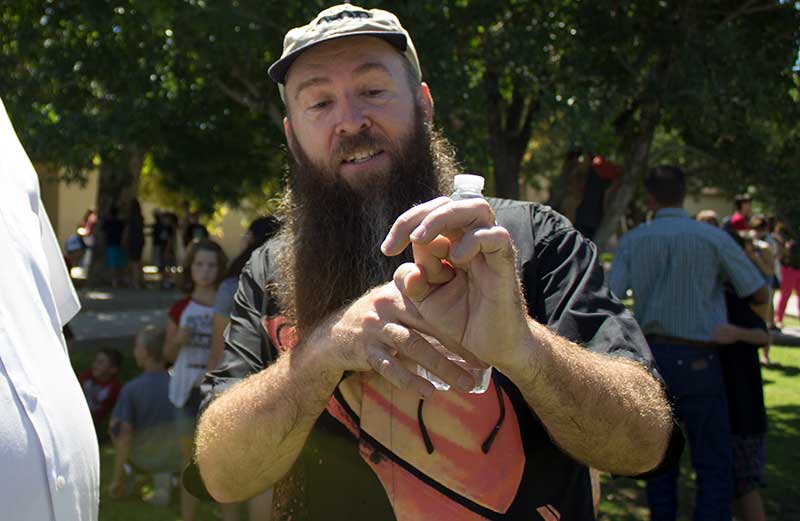 Aside from giving his students and the public a chance to watch the eclipse through a variety of sun-spotting devices, Morris said the most visually stimulating aspect of the eclipse for him was the way nature mirrored the astronomical event.

“We had a great turnout,” Morris said. “Visually, for me, the most exciting thing to look at was all the pin-hole projections coming through the dappling leaves of the big trees that we have out here on the Eastern Arizona Quad. The trees create little tiny pin holes and the light coming through those pin holes creates projections on the ground. So, that created thousands of little crescent suns projected onto the sidewalk. That was a unique and beautiful sight.”

Many other bystanders marveled at Mother Nature’s pinhole projections as well. In essence, the trees were creating a natural pinhole projection that many individuals across the United States made out of cereal boxes. When light passed through the tiny holes in the shade of the trees, this created a tiny aperture. The light passed through the aperture and then projected the inverted image into the shade, creating what is known as the camera obscura effect. 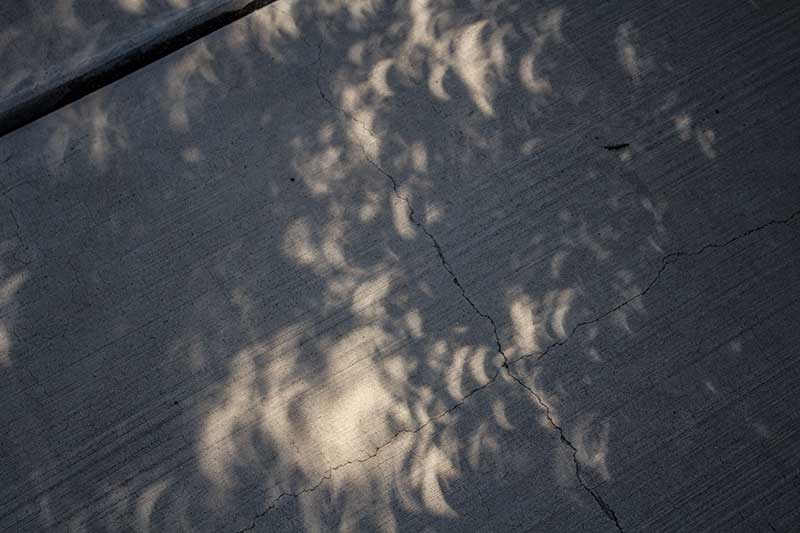 “I was amazed by the solar eclipse,” he said. “It was humbling to witness such a rare event and will be something to talk about for years. I would have especially enjoyed it if we could have seen the full eclipse from this area, but I am grateful to have seen even a partial one.”

Below are several of the photos that one of Gila Valley Central’s favorite photographers, Paul Schulz, took when he traveled from Safford to Torrington, Wyoming to view the eclipse.  Originally, Schulz said that he intended to view the eclipse in Triumph, Nebraska, but after watching the weather carefully, he and the group that he was traveling with decided to head west to Wyoming instead. With less than an hour to spare, Schulz and his party pulled off the road and set up their photography equipment in a field. 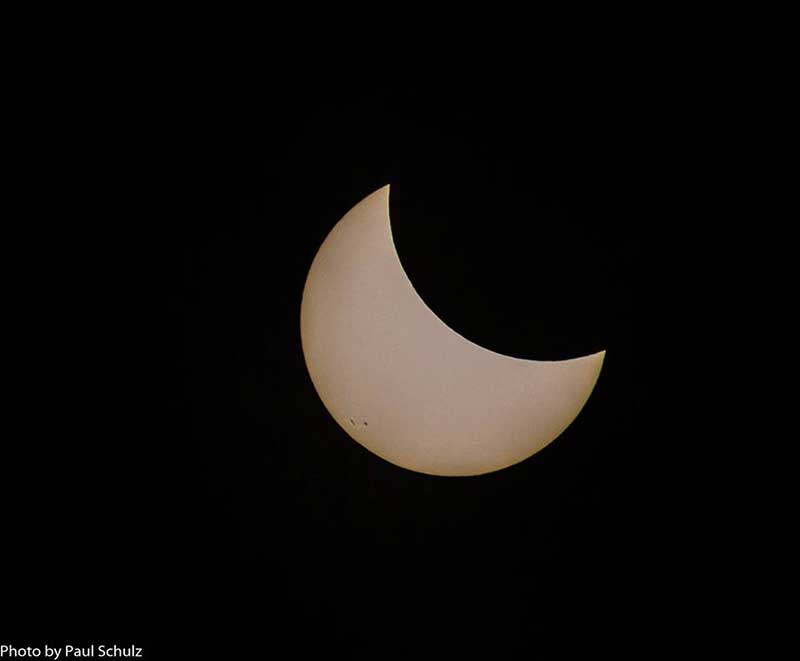 Schulz told Gila Valley Central that he set up his Canon 60D on a tripod with a filter and a timer. Using the camera’s monitor to safely inspect the camera’s photography angle, Schulz marveled at the beauty of the eclipse. As the moon’s shadow crept to cover the area Schulz and his crew were in, Schulz said the temperature dropped roughly 15-20 degrees and that the cows in the adjacent field began to bellow.  In the 11 seconds of the totality of the eclipse, various planets were visible, including Jupiter. Previous to totality, Schulz’s camera was able to identify sun spots. The next day, Schulz told Gila Valley Central what it was like to witness the complete totality of the eclipse. 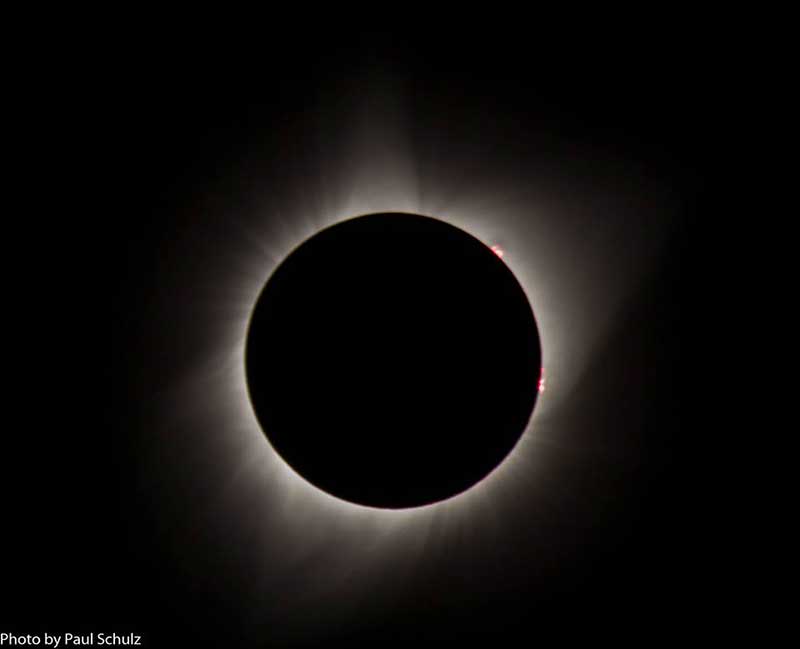 “The wind kind of dropped and you could see a shadow come in from the west, and it came toward us,” Schulz said.  “Essentially, in that totality, twilight and dusk just reigned over the land in that area. It was awesome, impressive, exciting, and emotional. I had a moment to take pictures with my hand held camera, which is a 300-millimeter lens, and I was able to zoom in on the totality and got several pictures.” 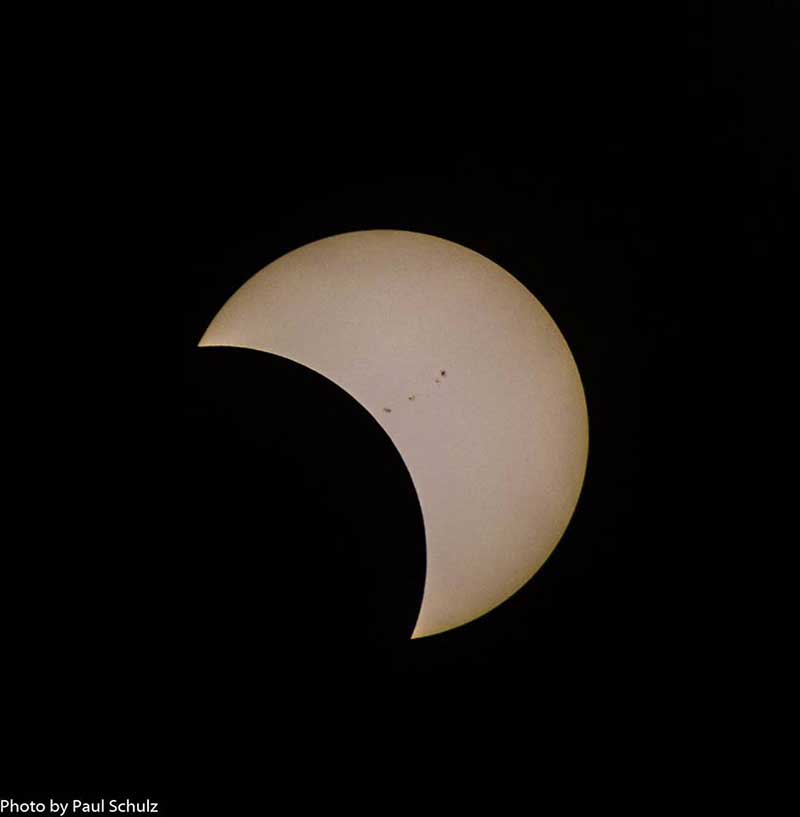 Schulz said that the time of the totality was roughly two minutes and 11 seconds. However, as soon as the moon began to edge away from the sun, Schulz quickly placed the filter back on the lens. Schulz stressed the importance of being careful of the sun’s damaging rays. Although he was on a mission to get the best photos he could, like always, Schulz also said that he hoped that people simply enjoyed the moment of rare splendor that the eclipse brought.