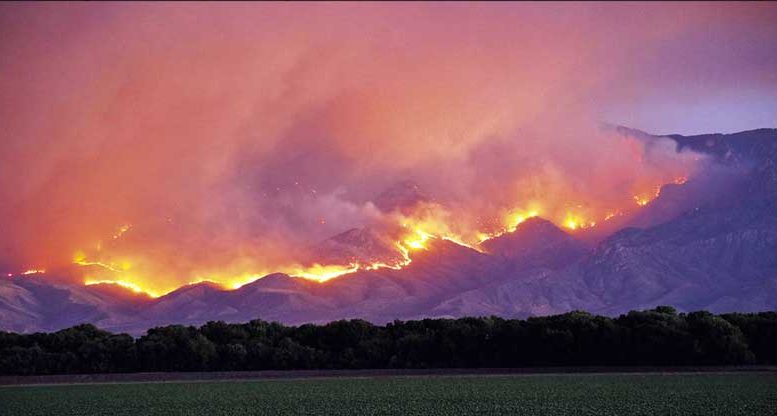 How can a quarter-acre, lighting-caused fire on Mount Graham explode into a 23,000-acre – and growing – catastrophe? By what rationalization is that even possible?

Initially, we were told lightening ignited two small fires during the afternoon of June 7.  One of the fires was later extinguished by rain while the other continued to smolder.  We were also informed the remaining fire, then less than a few acres in size, posed no danger as it was burning in an area previously destroyed by the Nuttall Fire.

A few days passed and the little fire got bigger.  Not to worry, we were again assured, since it remained in the “Nuttal scar” there was little chance of it spreading.  U.S. Forest Service officials concluded it would eventually burn itself out. A statement that would later take on a completely different connotation.

It didn’t burn itself out.  Contrary to USFS pledges, the fire continued to expand.  When questioned why it was not put out when it was still easily manageable, the public was informed because there wasn’t “resources available” due to numerous fires already burning in the state.  There was insufficient manpower and equipment to send to what was now being called the “Frye Fire.”  Besides, the fire was low priority, not threatening structures or the observatory atop Mount Graham and the terrain was too rough to risk personnel.

The fire had spread to several hundred acres and nearly doubling every day.

Finally, after exceeding the Nuttal “scar”, Hot Shot crews began to arrive but no real aerial support.  The fire continued to expand to over 1,000 acres, then 3,000 acres.  USFS supervisors changed their strategy from allowing the fire to burn out to one of containment.

Additional fire crews began arriving on scene.  Now at 9,000 acres, the entire mountain was being threatened, including the telescopes and other buildings in the area.  Daily USFS briefings, intended to keep the public updated, were beginning to be questioned by a suspicious citizenry.  How could such a small fire suddenly erupt into a roaring monster with no apparent hope of being extinguished?

The fire was now more than 12,000 acres, threatening to top-out and spread to the other side of the mountain.  Air support finally arrived and began dropping water and flame retardant in the vicinity of the telescopes.  More help arrived but the fire continued to grow to more than 14,000 acres.

By June 21, two weeks after the fire started, more than 17,000 acres had been destroyed and it became the largest active fire burning in the state.

Still not contained, USFS was now saying it would probably burn until the end of July.  In spite of more than 800 firefighters, multiple aircraft and millions of dollars being spent, the fire has assumed a life of its own.

All of this misery from the spark of a single lightning strike.

Actually, all of this misery is from neglect and incompetency.  There is no logical reasoning that could possibly justify the USFS conduct in this event.  When a building is on fire, it is extinguished as soon as possible before it endangers other structures and people.  When a forest is on fire, it too should be put out immediately to keep from spreading and doing additional damage.  It is much less difficult and far less expensive to fight a fire when it is small than later when it is out of control.

And please, don’t make excuses by saying there wasn’t enough people or equipment available.  I find it hard to believe there wasn’t a helicopter or two that could have been deployed to drown the little fire in the beginning, but now there’s all kinds of flying machines buzzing around and hundreds of people combating the flames.

Similar to the Gibson Fire several years ago, which, like the Frye Fire, was permitted to smolder for a week or so until winds whipped it into an inferno that destroyed almost the entire eastern face of Mount Graham, the USFS fire plan was woefully inadequate then.

Today, it doesn’t appear much has changed or any lessons learned.  What’s the old saying about the definition of insanity – doing the same thing over and over and expecting a different result?