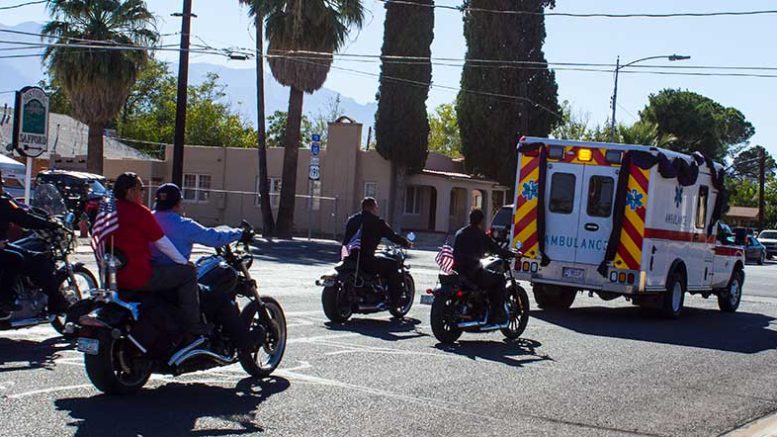 Contributed Photo/Courtesy of Dove Schnebly: At 3:30pm on Sunday, the funeral procession accompanying the casket of Supervising Paramedic Luthor Victor left for Bylas.

“On Monday, Oct. 2nd, our Supervisor, and longtime Paramedic Luther Victor passed away in an off-duty vehicle accident here on the reservation. Luther has been a major influence in the local and state EMS community for over 20 years,” Evans wrote.

Contributed Photo/Courtesy of Dove Schnebly: Police officers from multiple cities and towns participated in the procession.

The San Carlos EMS community gathered Sunday afternoon at the Caldwell Funeral Home in Safford to escort Luther to the wake at Bylas. The funeral procession of eight ambulances and two fire trucks drove down Highway 70, leaving the funeral home around 3:00 pm. Police officers also followed the ambulance holding Victor’s casket. Evens wrote that the public was invited to support the funeral escort by standing along the highway with signs, and flags.

Dove Schnebly, who watched the funeral procession on Sunday when it left the funeral home, told Gila Valley Central that she felt that Victor received an honorable send-off.

“The deceased was greatly honored within the EMT and law enforcement community,” Schnebly said. “Watching the line of ambulances and other emergency vehicles leaving the funeral home was inspiring. He must have touched a lot of people’s lives. ”