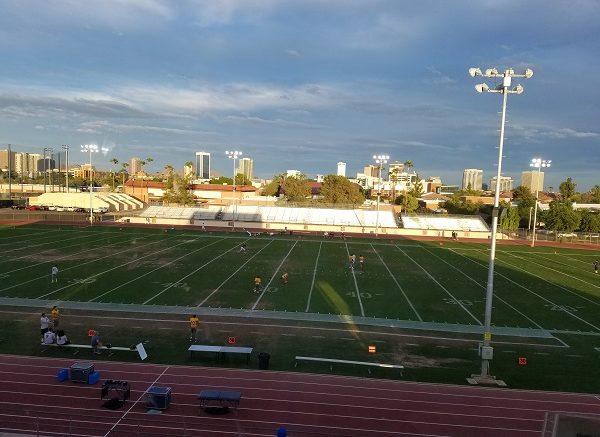 A view of Downtown Phoenix from the press box and Phoenix College.

For the second straight week Eastern Arizona rushed for over 400 yards in a WSFL win. This time is was 423 yards against the Phoenix College Bears in a 42-10 win.

The Bears drove the length of the field on their next drive to set up a long field goal attempt. Xavier Rojas’ kick came down a yard short and was fielded by Eastern’s Quandre Mosley. He started to the right side of the field across 20 yard line, then cut it back to the left down the Eastern sideline before making one more move around the 30 yard line to go 109 yards untouched for a touchdown that put Eastern up 14-3.

The Monsters continued to pound out ground yards and would add touchdowns by Keyshawn Lowe, Jermaine Ziegler, Wilber Cooper and Jamal Benson.

Phoenix College added a late touchdown with 2:15 left in the game to end the 42 unanswered points scored by Eastern Arizona.

Eastern stays undefeated in the WSFL to keep pace with Pima College who defeated Glendale 28-10. These two will meet in Tucson on October 27th in what is shaping up to be the conference championship game.