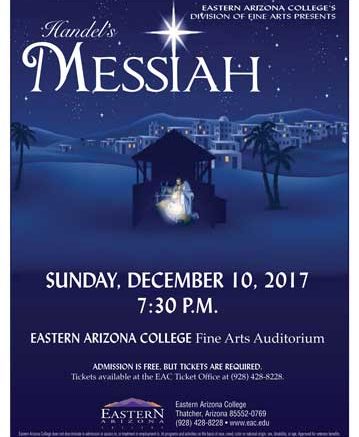 THATCHER — On Sunday, Dec. 18, 1936, 82 singers staged a performance of Handel’s celebrated oratorio Messiah in Thatcher, Arizona. The Gila Junior College Chorus (now Eastern Arizona College) combined with community singers for this premier performance of what has become a yearly tradition treasured by the Gila Valley community. This annual production is the longest running tradition of annual Messiah performances west of the Mississippi.

Choirs have always been important at EAC. The archives show that the academy choir sang for the first commencement in 1890. By the 20th century, a choir was firmly ensconced in the academic curriculum. For the fall semester of 1934, at Gila Junior College, the music department hired two new instructors: Mr. and Mrs. Ben Johnson from New York City. During their brief tenure, the Johnsons began the tradition of performing Handel’s Messiah at the beginning of the Christmas season.

The program, from the first performance, shows that the chorus for Messiah was composed of community singers and the Gila Junior College Chorus. It is interesting that among those listed as Community Singers, one of three tenors was Spencer Kimball. This first Messiah performance was held in the old Thatcher LDS Church located on Church Street adjacent to campus. At that time, Gila Junior College had no facilities for music performances. Most choir and band concerts were held in the Thatcher LDS Church. The sanctuary was noted for fine acoustics and an outstanding organ. The organ was sole accompaniment for the performance.

Mrs. Eunice Whetten of Thatcher believes that she was in attendance at the first performance.

“I sat on the benches along the side of the chapel because I could hear better there,” she said. “I remember attending Messiah for several years before I was old enough to sing.”

She was invited to join the 1939 Messiah choir during her junior year in high school under the direction of Evan A. Madsen, who had become the new music director at the college.

“I was so excited to think that I could sing Messiah,” Whetten said. “I loved it from the first time I heard it.”

Whetten has sung continuously in the Gila Valley Messiah production since 1939 “except for three years when we lived in New Mexico and one other year right after I had a baby.”

Messiah has been performed in the Gila Valley each December since the 1939 debut. Although few records are available about early years, it is clear that the traditional Messiah performances continued and strengthened during those decades. There were also challenges. Whetten recalls the hardest time that the college had in continuing the tradition was during World War II when many of the men were abroad fighting.

“Mr. Lew J. Lewis was the director during the war and he asked me to sing tenor for a couple of years, but I was glad to return to alto when the men returned home,” Whetten said. “It was a struggle during the war, but we kept the tradition going.”

This year marks the 81st performance of this ongoing tradition of performing Handel’s immortal oratorio. Special invitations have gone out to all choir alumni in Arizona and the region, and the college is working to make this milestone a significant event. Audience members who have sung the “Hallelujah” chorus in the past will be invited to join the orchestra and stage choir as Dr. David Lunt, EAC emeritus alumni, takes the podium to conduct this movement.

A large crowd is expected for Messiah, so plan to arrive early. Eunice Whetten will be in her place on stage in the front row of the alto section. We hope Gila Valley audiences will plan to attend this Christmas tradition on Sunday, December 10, at 7:30 p.m., in the Fine Arts Auditorium.