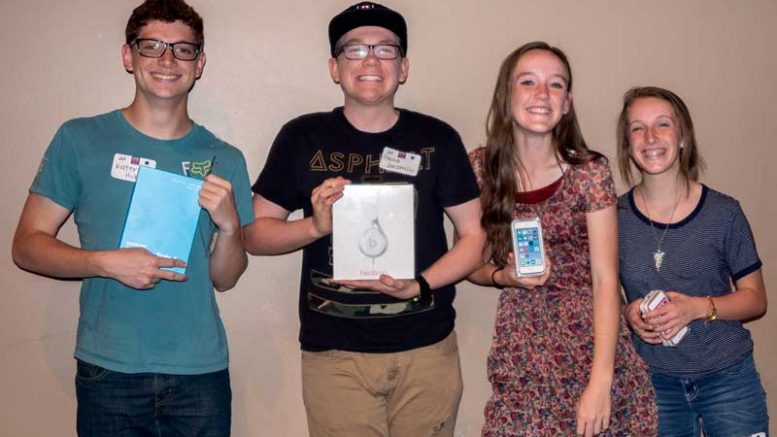 Several volunteers from Freeport, the EAC Engineering Club and the community spent the day mentoring students and running the competitions.

“For a small community, we have a very large number of engineers that live and work here,” said EAC engineering instructor and coordinator of the event, Tom Palmer. “Unfortunately, there are very few opportunities for those professionals to rub shoulders. Engineering Day is a great chance for a variety of professionals to come together and help a new generation of students gain insight into engineering as a potential career choice. All of the volunteers I spoke with asked me to please make sure they are invited back next year.  It’s great to see so many people willing to give of their time and talents.”

The K’Nex Bridge Contest tested the students’ abilities to work as a team by having to utilize a limited amount of resources they had to “purchase” and solve a problem within a limited time frame. Teams built a bridge that needed to support an applied load using only K’Nex building materials. The first-place winners were Mikayla Provencio, Miranda Hernandez, David Gabbitas and Jason Estrada from Safford High School. The second-place team included Jonah Kamae, Sam Nicholas, Brock Jones and Ben Shumway from Thatcher High School.

The Egg Drop Competition involved dropping an egg from a height of 16 feet onto solid concrete. The primary objective was to construct a device that could protect the egg, with the secondary goal of constructing the most cost-effective device. The first-place winners were Hanna Prestridge, Calli Harmon, Abby Rapier and Julia Ferrin from Thatcher High School. The second-place team, also from Thatcher, included Keena Polen, Amanda Orr, Breann Ellett and Braydee Sanders.

The Popsicle Tower involved the construction of a water tower. The goal of this competition was to construct a tower using only popsicle sticks and hot glue.  The tower had to be free-standing and hold as much weight as possible.  Points were awarded based on the height of the tower, the cost of the building materials and the load supported by the tower prior to failure. The winners of this team exercise were Dylan Barnes, Kolby Pettit, Porter Johnson and Gavin Bingham from Thatcher High School. The second-place team included Payson Lutz, Stuart Lines, Christian Farley and Brock DeSpain, also from Thatcher.

New to Engineering Day this year was the Mining Competition.  Jeff Tysoe, an engineer with Freeport and instructor of the Introduction to Mining Engineering class at EAC, and his team designed and ran the competition which challenged students to build a model open-pit copper mine that was economical using different colored wooden blocks. The first-place winners were Straton Baldwin, Grant Montierth, Sean Silvas and Epoch Fry from Safford High School. Second-place winners were Wesley Conger, Mathew Basteen, Braden Basteen, and Kade Stacy from Duncan.

All prizes and awards were handed out to the winners at an assembly at the end of the day.

Eastern Arizona College offers an associate’s degree in Engineering which is designed to transfer to almost any university. By taking classes at EAC, the tuition is significantly lower and the class sizes are much smaller. The program continues to grow thanks to Engineering Day and the great support of the community.

For information about next year’s EAC Engineering Day contact Palmer at (928) 428-8226 or by email at tom.palmer@eac.edu.